"11 Louds a Leapin'" is the Christmas episode of the Nickelodeon animated series The Loud House. It is the first episode produced for the show's second season, and also notably the show's first full half-hour episode. Its title is a reference to the line "ten lords a-leaping" from the song "The Twelve Days of Christmas".

It is Christmas Eve in Royal Woods, and as it often is, the household of the Loud family is bustling with activity. Lincoln is up in his room, getting dressed to go sledding, when he tells the viewers that there's no better time to be here, before heading out of his room to observe the activities of his ten sisters. Luna is trying to write a Christmas song but is having trouble coming up with one, while Luan has just gotten started telling her "12 Puns of Christmas", which Lily doesn't think are very funny. Leni is trying to design herself a Christmas outfit, but she keeps unwittingly making them out of the decorations. Lori calls her boyfriend Bobby to tell him that he shouldn't let the fact that it's their first Christmas as a couple put any pressure on his trying to find a present for her (which he is having trouble deciding on). Lincoln goes downstairs and tries to get his boots out from the nearby pile, but Lola volunteers to get them for him and does so. When Lincoln asks her why, she tells him that she wants to get on Santa Claus's nice list, so she's doing as many good deeds as she can to offset her past nastiness. Lisa, however, tells her that will never work, showing her mathematical equation saying that Santa is not real. Lynn Jr. and Lucy, meanwhile, are searching all over the house for where their parents, Rita and Lynn Sr., have hidden their gifts. And finally, Rita is busy putting up all the stockings (and wishing she had a bigger fireplace) while Lynn Sr. is baking his figgy pudding (which the kids are not keen on trying). Just then, Lincoln hears loud complaining from their crabby next-door neighbor, Mr. Bud Grouse, and points out that the man always lives up to his surname, especially around Christmas.

Lincoln, however, decides not to let Mr. Grouse's grouchy attitude dampen his holiday spirit, and goes outside with his Fearsome Flyer 8000 sled, which he has dubbed "Big Red". After accidentally getting caught in a net that Lana has set in an attempt to catch one of Santa's reindeer (which she wants as a pet), Lincoln goes sledding down the family slide. Unfortunately, he hits a rock, and although he is unharmed, "Big Red" lands in Mr. Grouse's backyard. Lincoln tells the viewers this is bad news, because Mr. Grouse always takes away anything that ends up in his yard. Not wanting his sled to suffer that fate, Lincoln calls up his best friend Clyde (who is attaching a sprig of mistletoe to his hat so he can get a kiss from Lori) and explains his dilemma to him.

Clyde soon arrives and Lincoln diagrams his plan to him. He wants Clyde to go up to Mr. Grouse's front door and keep him distracted by singing Christmas carols, hopefully giving Lincoln enough time to sneak into the back yard and retrieve "Big Red". Unfortunately, while Clyde is singing, Mr. Grouse hears a noise due to Lincoln almost knocking over a wheelbarrow of logs and goes out back, getting his hands on Lincoln's sled while the boy hides in said wheelbarrow. Lincoln is saddened that now he may never get his sled back, but then he sees that Mr. Grouse is going out for a bit and figures he may have another chance.

Getting Clyde to provide lookout (which he fails at due to accidentally stepping on Lana's reindeer catapult), Lincoln sneaks into Mr. Grouse's house through the doggie door and quickly manages to find "Big Red". Just as he's about to leave, though, he notices an old photo of a young Mr. Grouse with his own Fearsome Flyer 1000 sled. Just then, Lincoln hears Mr. Grouse opening his door and tries his best to stay hidden, but he is eventually caught and ends up breaking "Big Red". Mr. Grouse tries to call Lincoln's parents about this, but Lincoln's parents and sisters are too busy with their own doings to answer the phone. Ordering Lincoln to sweep up the mess he made, Mr. Grouse then gets a phone call from one of his relatives. Lincoln, looking at a photo of Mr. Grouse with his own family, listens in on the old man's conversation and learns that he hasn't seen his own family in five years and cannot afford to travel and see them, as opposed to how Lincoln spends every day with his rather large family. Lincoln offers Mr. Grouse his sympathy, but the old man does not want to talk about it and sends him away.

Lincoln heads back home to find his family still going about on with their own things. In particular, Lori, who has a bad habit of opening everyone's presents too early, has just received a very large present in the mail and is desperately trying to resist the urge to open it before tomorrow morning, while Lola volunteers to take a taste of her Dad's figgy pudding when the other sisters won't. Lincoln calls his sisters together for a sibling meeting and tells them that he just found out why Mr. Grouse is so mean to them, explaining to them what he just found out about the poor guy. Upon hearing Lincoln's story, the sisters also feel sorry for Mr. Grouse, and they realize they've been so caught up in their own accomplishments and desires that they forgot they should be thinking of others. This gives Luna the realization that she'd had the wrong idea for her earlier attempts at writing a Christmas song and now has the proper spirit. As she goes upstairs to write her song, Lincoln elaborates to his sisters on his plan to cheer up their neighbor.

Later that evening, Mr. Grouse is awoken from his nap by the sound of caroling outside. He goes to his front door and is greeted by the Loud family, as well as Clyde and his dads, who all sing the new song that Luna just wrote, "That's What Christmas is All About". They then present him with a special gift from all of them - a bus card, so that he can go see his family tomorrow; until then, they've all come to spend Christmas Eve with him (during which Lynn Sr. and Rita finally show their faces for the first time in the show's run). Mr. Grouse, touched at their kindness, invites them in, and after Leni gives him a new vest (which she made from his curtains), he apologizes to the Louds for his grouchy attitude and gives back everything he took from them. He also apologizes to Lincoln about his sled getting broken, but Lincoln say it's fine, because he's more glad that they're friends now.

The next morning, after the Loud kids have all opened their presents, Lori finally opens the large present she received yesterday; it turns out to be Bobby himself, having decided to mail himself to Lori because he couldn't decide on the perfect present. Lisa then states that she now does believe that Santa exists, as she managed to get a photo of him (actually Mr. Grouse dressed as Santa) leaving a present behind the couch. Lynn finds the present and reveals that it's for Lincoln; he opens it up to find that it is a Fearsome Flyer 1000 sled, which he recognizes as the same one from Mr. Grouse's old photo. Lincoln goes outside to see Mr. Grouse just as he's getting ready to go see his family, and thanks him for the sled, though Mr. Grouse remarks with a wink that he should thank Santa for it. Lincoln then goes to ride his new sled, saying that he got the best present ever - a new friend. However, he hits the same rock as before and his new sled flies into and breaks Mr. Grouse's window. As Lincoln runs away, Luan finally says her twelfth pun and then wishes a merry Christmas to the viewers right before she suddenly gets caught in Lana's reindeer net.

In the United Kingdom, the episode was featured on its own DVD, titled A Very Loud Christmas and released on October 29, 2018. This DVD also contains the episodes "Snow Way Out", "Snow Way Down", "Snow Bored", "A Tale of Two Tables", "L is for Love", and "Baby Steps".

In the United States, the episode was made available as part of The Loud House - Season 2, Volume 1: Relative Chaos DVD set, released by Paramount Home Media Distribution on May 21, 2019. 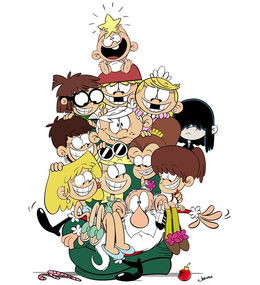 The Loud House decorated for Christmas.

"It's the day before Christmas, and there's no better time to be in the Loud House!"

Luan gets started on her twelve puns.

"You know what I want for Christmas? A bigger fireplace."

Lynn and Lucy search for their presents.

Mr. Grouse yelling from his window.

Lincoln goes sledding down his slide...

Lori receives a giant present just as she's resolved to hold off on unwrapping anything. 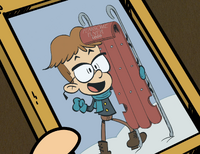 Lincoln finds a photo of a young Mr. Grouse.

Lincoln ends up breaking his sled.

Lincoln offers his condolences after learning that Mr. Grouse can't visit his family.

"Your figgy pudding is always the highlight of my Christmas!"

Mr. Grouse gives back everything he took from the Loud siblings.

The Loud family on Christmas morning.

Lori finds that Bobby gift-wrapped himself for her.

Lincoln figures out that Mr. Grouse gave him his old sled...

...and thanks him for it.
Add a photo to this gallery

Retrieved from "https://christmas-specials.fandom.com/wiki/11_Louds_a_Leapin%27?oldid=148536"
Community content is available under CC-BY-SA unless otherwise noted.