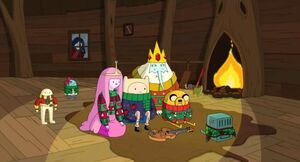 "Holly Jolly Secrets" is a special two-part Christmas-themed episodes of the Cartoon Network original series Adventure Time, produced as the nineteenth and twentieth episodes of the show's third season. It was originally broadcast as a half-hour special on December 5, 2011. Finn and Jake are trying to dig up a treasure Jake had found in the Dump and had buried without opening. When they get to the treasure Finn recognizes it, saying that he saw Ice King with it and burying it in a pile of boogers in the Dump. So they see that inside the suitcase is a bunch of tapes belonging to the Ice King and make plans for a secret tape watching. (more...)

Recently featured: The Night Before Christmas (Tom and Jerry) - Sonic Christmas Blast - Simpsons Roasting on an Open Fire
Vote HERE for the next Featured Article.

Retrieved from "https://christmas-specials.fandom.com/wiki/Main_Page?oldid=165962"
Community content is available under CC-BY-SA unless otherwise noted.