A Charlie Brown Christmas is the first animated television special based on the popular newspaper comic strip Peanuts by Charles M. Schulz, and the first Christmas special for the franchise. It was produced and directed by former Warner Bros. and UPA animator Bill Melendez, who also supplied the voice of Snoopy. Originally sponsored by Coca-Cola, the special debuted on CBS in 1965, and has been aired during the Christmas season every year since (on CBS through 2000, and on ABC since 2001). The special has been honored with both an Emmy and a Peabody Award.

Charlie Brown is feeling depressed due to the over-commercialization of Christmas; his little sister Sally has written to Santa Claus asking for cash, and his beagle Snoopy has decked out his doghouse in the hope of winning a Christmas decorations contest. Lucy recommends that he direct the school's Christmas pageant in order to lift his spirits.

Charlie Brown arrives at the rehearsals, but try as he might, he cannot seem to get control of the situation as the uncooperative kids are more interested in modernizing the play with dancing and lively music. Charlie Brown, on the other hand, is determined not to let the play become commercial and to focus on the traditional side of the story.

When they return to the school auditorium with the tree, everybody, especially Lucy, laughs at Charlie Brown about his choice. Second guessing himself, Charlie Brown begins to wonder if he really knows what Christmas is all about, loudly asking if anyone can tell him what Christmas is all about, to which Linus eloquently responds by quoting the second chapter of the Gospel according to Luke, verses 8 through 14 from the King James Version.

Charlie Brown now realizes he does not have to let commercialism ruin his Christmas. With a newly found sense of inspiration, he quietly heads home with the tree, deciding to decorate it and show the others it will work in the play. He arrives home to find that Snoopy's doghouse has won the first prize in the decorating contest. But when he places a single ornament from the doghouse onto his tree, the whole thing bends over, and Charlie Brown is afraid that he has killed it. However, the rest of the gang comes to cheer him up, with Linus wrapping his blanket around the tree and everyone else placing the remaining decorations from Snoopy's doghouse to the tree, much to Charlie Brown's surprise, and then singing "Hark! The Herald Angels Sing" along with him.

Bringing the Peanuts characters to television was not an easy task. The production was done on a low budget, resulting in a somewhat choppy animation style and, from a technical standpoint, poorly mixed sound. With the exception of the actors who voiced Charlie Brown (Peter Robbins), Linus (Christopher Shea), and Lucy (Tracy Stratford), none of the children had any experience doing voice work.

CBS' network executives were not at all keen on several aspects of the show, forcing Schulz and Melendez to wage some serious battles to preserve their vision. Among them, the executives had problems with the scene with Linus reciting the story of the birth of Christ from the Gospel of Luke (because they assumed that viewers would not want to sit through passages of the King James Version of the Bible; Charles Schulz insisted on keeping this scene in, remarking, "If we don't tell the true meaning of Christmas, who will?"), the absence of a laugh track, the use of children doing the voice acting, and the jazz soundtrack by Vince Guaraldi (which they thought would not work well for a children's program). When executives saw the final product, they were horrified and believed the special would be a complete flop. CBS programmers were equally pessimistic, informing the production team, "We will, of course, air it next week, but I'm afraid we won't be ordering any more." Mendelson and Melendez said to themselves, "We've just ruined Charlie Brown."

To the surprise of the executives, the premiere of A Charlie Brown Christmas was the second-highest rated program of the week, reaching well over 15 million homes. Charlie Brown was second only to the blockbuster Bonanza; more people watched the special that week than Lucille Ball, Walt Disney's Wonderful World of Color, The Andy Griffith Show, and The Beverly Hillbillies. [1]

The special was first released to home video by Hi-Tops Video in 1984. It was released on VHS again in 1990, this time being sold exclusively at Shell gas stations. The special was released on VHS again when Paramount Home Video acquired the video rights to the Peanuts cartoons in 1994. Paramount issued it a second time in 1996, this time in a plastic case. At the same time, they also released it to Laserdisc; this release also included the non-holiday Peanuts special You're the Greatest, Charlie Brown.

Paramount later released the special on DVD in 2000, where it was accompanied by It's Christmastime Again, Charlie Brown. Following Warner Home Video's acquisition of the video rights to the Peanuts specials, a "Remastered Deluxe Edition" DVD was released in September 2008, again with It's Christmastime Again as a bonus special, but also with a new behind-the-scenes featurette. A Blu-Ray edition of this release was released a year later. Warner also made the special available as an iTunes and a PlayStation Network digital download, also accompanied by not only It's Christmastime Again, but also the non-holiday special It's Flashbeagle, Charlie Brown. The special is also available on the 2-disc set Peanuts 1960s Collection. 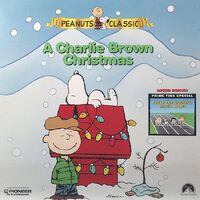 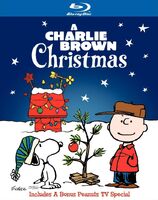 Blu-ray
Warner Home Video, 2009
Add a photo to this gallery

The special has notably not been shown in its original form since the 1960s, due to having to cut out plugs for the special's original sponsor, Coca-Cola. In the original airing, immediately following Charlie Brown crashing into the tree during the opening sequence, Linus got tossed at a Coca-Cola billboard, and the end credits used to close with a subtitle reading "Merry Christmas from your local Coca-Cola bottler." Also, from 1966 through 1996, subsequent broadcasts cut out the scene where the kids throw snowballs at a tin can on a fence. The scene with the can was reinstated in the 1990 VHS release (and all subsequent video releases), and it later returned to the televised broadcasts of the special in 1997.

The special has been shown this way every year since then, except when it was aired alongside the premiere broadcasts of Prep & Landing in 2009 and Prep & Landing: Naughty vs. Nice in 2011; in these broadcasts, the following scenes were cut to create space for more commercials:

"And there were in the same country shepherds abiding in the field, keeping watch over their flock by night. And lo, the angel of the Lord came upon them, and the glory of the Lord shone round about them. And they were sore afraid.
"And the angel said unto them, 'Fear not. For behold, I bring you good tidings of great joy, which shall be to all people. For unto you is born this day in the city of David :a Saviour, which is Christ the Lord. And this shall be a sign unto you: Ye shall find the babe wrapped in swaddling clothes, lying in a manger.'
"And suddenly there was with the angel a multitude of the heavenly host praising God, and saying, 'Glory to God in the highest, and on Earth peace, good will toward men.'

"That's what Christmas is all about, Charlie Brown."

A soundtrack album of the special's musical score was released in 1965 on Fantasy Records, which was a well-known jazz label, and Guaraldi's home label at the time. The album became an instant classic, and remains available to this day. A single of "Christmas Time is Here", backed with "What Child is This", was also released. 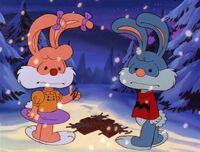 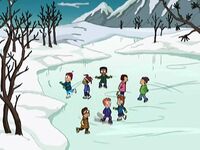 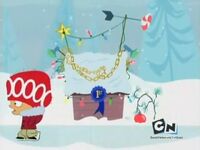 "Merry Fishmas, Milo"
Add a photo to this gallery

Note: 3, 4, and 5 make appearances, but do not have speaking roles.

Retrieved from "https://christmas-specials.fandom.com/wiki/A_Charlie_Brown_Christmas?oldid=45968"
Community content is available under CC-BY-SA unless otherwise noted.