The special starts out with a doctor visiting the Waterford family whose son, Tommy, is sick. He admits that the chances of him recovering before Christmas are slim.

Meanwhile, the Chipmunks are going to a recording session. Alvin is not very happy about having to work on Christmas, but after Dave tells him that he can play his prized Golden Echo harmonica, he suggests that Dave can get the studio ready while he, Simon, and Theodore go window shopping. Dave agrees and tells them not to be late.

At the music store, Alvin sees another Golden Echo harmonica on display and tells his own that it's the best one in the world. At that moment, Mrs. Waterford and her daughter, Angela, arrive, and Alvin overhears Angela tell her mother that if Tommy had the harmonica, it would make him feel better. Alvin feels bad about Tommy's illness, so much so that during the recording session, he can't sing in tune with Simon and Theodore. Alvin talks Dave into letting them take a break and then goes to the Waterfords' house to give his own harmonica to Tommy, returning in time to finish the session.

Later, while they are decorating their Christmas tree, Alvin explains to Simon and Theodore what he did, and tells them that he can't tell Dave about the harmonica because he gave it to him long ago. He is worried that Dave's feelings would be hurt if he learned what happened, so after Christmas, he plans to save up his money and buy himself a new one as a replacement. Unfortunately, Dave then gets a phone call from Carnegie Hall, who wants Alvin to play his harmonica on Christmas Eve. Realizing that now he is going to need a new one before Christmas, Alvin devises a plan to earn enough money for it.

The Chipmunks gather up eight of the neighborhood dogs, dress them as reindeer, and set up a photo booth, where children can have their picture taken with Santa (Alvin). Unfortunately, the presence of a cat ruins the whole thing, and draws Dave's attention. When the Chipmunks try to explain to him what happened, saying that Alvin wants to buy something, he mistakes Alvin's actions for greed, and sends him, Simon, and Theodore to their room. This leads to a dream sequence in which he meets Clyde Crashcup, who says that he invented Christmas (which is now on February 12) and Santa (Abraham Lincoln in a sleigh consisting of a hollowed-out pumpkin pulled by four elephants). Alvin tells him that he needs money, and when Dave comes to check up on him, he is saying "money" in his sleep, causing Dave to give up.

On Christmas Eve, two hours before the concert, Simon and Theodore give Alvin the money they have saved up for a new book, and wish him luck on buying the harmonica. When Dave asks where he went, they lie and say they don't know. Luckily, just as he is complaining, he gets a phone call from Mrs. Waterford, who tells him about Alvin's harmonica and the wonders it made for Tommy.

At the music store, Alvin is depressed, as he still doesn't have enough money for a new harmonica. Just then, a strange old woman appears, and buys it for him, only asking for a song in return, but disappears by the end. Dave, Simon, and Theodore arrive, and Dave apologizes to Alvin and tells him they have a surprise for him. At the concert, he learns that Tommy has fully recovered, and he joins the Chipmunks on stage.

At the end, Santa flies over the city as we hear the Chipmunks singing "We Wish You a Merry Christmas". When he returns to the North Pole, he is greeted by Mrs. Claus, the same old woman who gave Alvin the harmonica.

A soundtrack album was released by RCA Records at the time of the special's premiere. It contained all of the songs featured in the special, with the strange exception of "Wonderful Day". Originally released as an LP, the soundtrack album would be reissued on cassette and CD between 1992 and 2001. 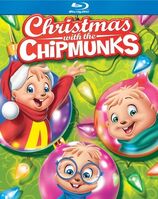 Christmas with the Chipmunks DVD with bonus CD
Bagdasarian Productions
November 6, 2012
Add a photo to this gallery 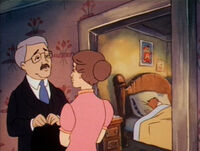 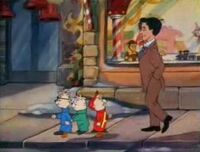 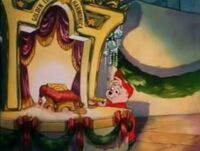 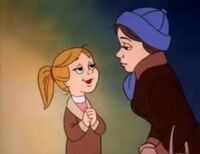 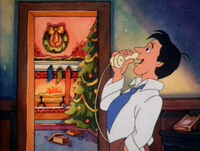 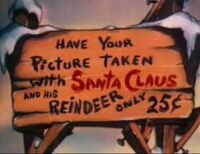 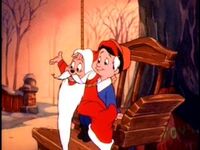 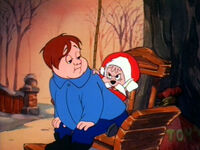 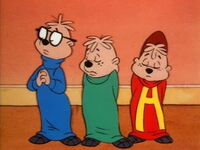 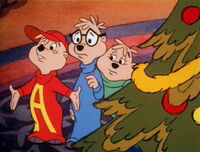 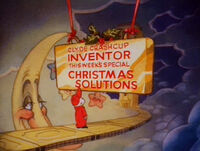 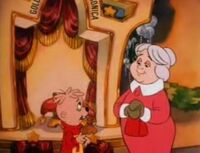 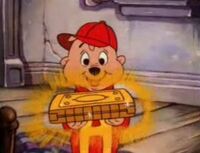 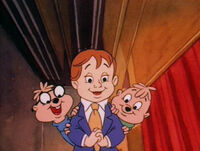 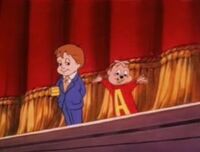 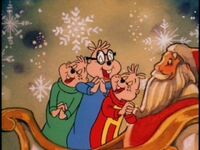 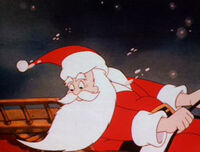 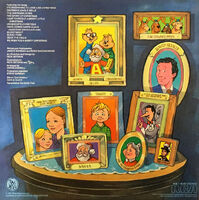 Retrieved from "https://christmas-specials.fandom.com/wiki/A_Chipmunk_Christmas?oldid=180345"
Community content is available under CC-BY-SA unless otherwise noted.