Christmas Specials Wiki
Register
Don't have an account?
Sign In
Advertisement
in: Movies, A Christmas Carol, Disney,
and 3 more

Disney's A Christmas Carol is an animated 3-D film adaptation of Charles Dickens' classic story of the same title. Presented by Walt Disney Pictures and ImageMovers Digital, it was released in Disney Digital 3D and IMAX 3D on November 6, 2009, through distributor Walt Disney Studios Motion Pictures.

In July 2007, it was announced that director Robert Zemeckis had written a screen adaptation of Dickens' 1843 story. The film utilizes the same kinds of motion capture techniques used previously by Zemeckis in The Polar Express.

Zemeckis wrote the screenplay with Jim Carrey in mind, and Carrey signed on to the project. Similar to Tom Hanks in The Polar Express, Carrey plays a multitude of roles in the film, including Ebenezer Scrooge (both young and old) and all three of the Christmas spirits that haunt him.

The cast also includes Bob Hoskins, Colin Firth, Gary Oldman, Darryl Sabara (from the Spy Kids films) and Robin Wright Penn. Zemeckis, director of the Back to the Future trilogy, has previously stated that A Christmas Carol is one of his favourite stories dealing with time travel.

The film opens on Christmas Eve, in London, 1836, with Ebenezer Scrooge signing for the burial of his partner Jacob Marley. Seven Christmas Eves later, in 1843, Scrooge, a bitter and miserly old moneylender works at his counting-house, holds everything that embodies the joys and spirit of Christmas in contempt, refusing to visit his cheerful nephew Fred's Christmas dinner party with his family, and forcing his underpaid employee Bob Cratchit to beg to take the day off for his own family. That night, Scrooge is visited by the ghost of his former business partner, Jacob Marley, who is now forced to spend his afterlife carrying heavy chains forged from his own greedy ways. Marley warns Scrooge that he will suffer an even worse fate if he doesn't repent, and foretells that he will be haunted by three spirits that will help guide him.

The first spirit, the Ghost of Christmas Past, shows Scrooge visions of his own past that take place on or around the Christmas season, reminding him of how he ended up the avaricious man he is now. He had spent much of his childhood neglected by his father over the holidays at boarding school until he was finally brought home by his loving sister Fan, who died prematurely after giving birth to his nephew, Fred. Scrooge later began a successful career in business and moneylending and became engaged to a woman named Belle, though she later called off the engagement when he began to grow obsessed with accumulating his own wealth. Unable to bear having to witness these events again, Scrooge extinguishes the spirit.

The second spirit, the Ghost of Christmas Present, shows Scrooge the happiness of his fellow men on Christmas Day. Among them are his nephew, Fred, who playfully makes jokes with his family at Scrooge's expense, and Bob Cratchit and his family, who are just barely able to make do with what little pay Scrooge gives Cratchit. The Cratchits also tend to a sickly young son, Tiny Tim, whose commitment to the spirit of Christmas touches Scrooge, who is dismayed to learn from the spirit that he may not have much longer to live. The spirit warns Scrooge about the evils of Ignorance and Want, which manifest themselves before Scrooge as snarling, wretched, beastly children. The ghost disintegrates into a skeleton and vanishes.

The third and final spirit, the Ghost of Christmas Yet to Come, shows Scrooge the final consequences of his greed and even toys with him a few times. Scrooge sees in this future that he has died, though there is more comfort than grief in the wake of his death, the men attending his funeral only going for a free lunch. In addition, Fred is glad to be inheriting his wealth, and Scrooge is even robbed by his former maid, even stripping the clothes he was buried in. Tiny Tim is also shown to have died, leaving Bob Cratchit and his family to mourn him on Christmas. Unwilling to let this grim future come to pass, Scrooge begs to be given a second chance as the spirit throws him into his deep and empty grave to fall into his coffin, which sits atop the fires of Hell.

Scrooge awakens to find himself in his bed on Christmas morning, the three spirits having guided him over the course of one night, and immediately sets out to atone for his sins, making donations to the poor, attending Fred's dinner party, and giving Cratchit a raise to care for his family, allowing Tiny Tim to live. Scrooge spends the remainder of his life a new man embodying the spirit of Christmas itself.

The film's score was composed and conducted by Alan Silvestri.

Disney released the film on November 16, 2010 as a single-disc DVD, a two-disc 2D Blu-ray/DVD combo, and a four-disc combo pack that included a 3-D Blu-ray, a 2-D Blu-ray, a DVD, and a Digital Copy. This marked the first time that a movie was released in both a standard Blu-ray and 3-D Blu-ray on the same date, as well as one of Disney's first two releases in the 3-D Blu-ray market, alongside Alice in Wonderland (2010). The DVD contained deleted scenes and two features called "On Set with Sammi" and "Capturing a Christmas Carol". The Blu-ray also had a "Digital Advent Calendar" and the featurette "Behind the Carol: The Full Capture Motion Experience". 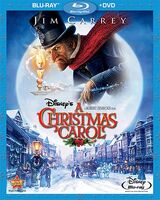 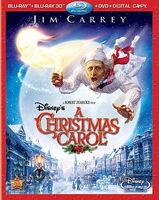 Differences from the book

Although this is one of the most faithful adaptions of A Christmas Carol brought to the screen, it does include several notable differences: