"A Christmas Carol" is an episode of the British science fiction television series Doctor Who. It is the sixth Doctor Who Christmas episode to be produced since the program's revival in 2005, and was broadcast on December 25, 2010 on both BBC One and BBC America, making it the first episode to premiere on the same day in both the United Kingdom and the United States. It is also the first Doctor Who Christmas episode not to feature any scenes taking place in London. Instead, it takes place over several Christmas Eves on a planet inhabited by humans, unnamed in the episode, but referred to as Ember by other media.

The episodes stars Matt Smith as the Eleventh Doctor, Karen Gillan as Amy Pond and Arthur Darvill as Rory Williams.

A space liner carrying over 4000 passengers, including Amy Pond (Karen Gillan) and Rory Williams (Arthur Darvill) on their honeymoon, is caught in a strange electrified cloud cover over a human-inhabited planet that interferes with its controls. The Doctor (Matt Smith), summoned by Amy, is unable to use the TARDIS to save the ship, and instead lands on the planet and discovers a spire in the centre of a large city is influencing the atmosphere. Its owner, the bitter and peevish old Kazran Sardick (Michael Gambon), refuses to operate the isomorphic controls to deactivate the spire and allow the ship to land safely. The Doctor observes Kazran's fear of his father who had built the spire, and creates a scheme inspired by Charles Dickens' A Christmas Carol to bring Kazran around.

He ventures to Kazran's past as a young boy, toying with the unique properties of the planet's atmosphere that allow fish to swim in it. The Doctor experiments with Kazran, leading to a shark entering the room and swallowing the Doctor's sonic screwdriver. Though the Doctor is able to recover part of the screwdriver, the shark is wounded in the effort, unable to swim back into the atmosphere. Kazran offers a solution by taking him to a cryogenic storeroom where Kazran's father has kept people in storage as "security" for loans, including Abigail (Katherine Jenkins), a young woman Kazran has been enamored with. Abigail, once released, sings to soothe the shark while the Doctor uses Abigail's cryo-unit to transport the shark back to the atmosphere. As the Doctor and Kazran return Abigail to storage, Kazran promises her they will see her every Christmas Eve. The Doctor keeps this promise, using the TARDIS to jump forward each year, helping to reunite Kazran and Abigail and watching their relationship blossom. However, after one such visit, Abigail tells the now young adult Kazran a secret, and Kazran requests the Doctor end the practice, keeping Abigail in storage indefinitely. Though old Kazran in the present becomes pleased with his new memories, he remains bitter at Abigail's fate and refuses to help save the ship.

Old Kazran is soon visited by holographic images of the ship's crew in the present. After observing the effects of Abigail's singing, the crew is singing Christmas carols that is helping to stabilize the ship but cannot prevent it from crashing. Amy appears to Kazran and implores his help, but he waves away the holograms. The Doctor appears, and Kazran surmises that he is there to show Kazran his future, but he could not care less if he dies old and alone; he reveals that Abigail had an incurable disease on entering cryostorage and will only have one more day to live. As he cannot decide which day that should be, Kazran chastises the Doctor for believing he could change his mind. Unbeknownst to Kazran, the Doctor has brought young Kazran with him, and hearing his bitter future self causes a change of heart, soon affecting the old Kazran as well, Kazran quickly agrees to release the controls to save the ship.

The Doctor finds his changes to Kazran's past have locked him out from the spire's controls, but the Doctor devises a solution: by having Abigail sing through one half of the broken sonic screwdriver, the other half, still in the shark, will resonate in the atmosphere and disrupt the storm to allow the ship to land safely. Kazran releases Abigail knowing this will be the last time, and after a tearful reunion, Abigail reminds him they have had many Christmas Eves together but it is now time to let Christmas Day come. The plan works successfully, and the resulting cloud breakout creates snowfall that falls around the city. As the Doctor rejoins Amy and Rory and prepares to take young Kazran back to the past, old Kazran and Abigail enjoy one last shark-led carriage-ride together. As The Doctor departs, Marilyn Monroe phones him and questions why he lied to her about the chapel they were married in, which wasn't a real chapel. 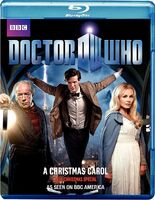 Retrieved from "https://christmas-specials.fandom.com/wiki/A_Christmas_Carol_(Doctor_Who)?oldid=98402"
Community content is available under CC-BY-SA unless otherwise noted.