"A Christmas Plotz" is the first half of the 49th produced episode of the Warner Bros. animated series Animaniacs. It is a parody of A Christmas Carol and was later adapted as the album A Hip-Hopera Christmas.

It is Christmas Eve at the Warner Bros. studio lot, but CEO Thaddeus Plotz is not at all in the mood to celebrate the holidays. As the bitter CEO complains about how everyone always sends him fruitcake for Christmas, Ralph the Guard steps in, since Plotz has called him in. Ralph reads a special holiday greeting and then gives a fruitcake that his wife made for Plotz. Plotz explains that he has looked at the end-of-the-year budget and found that Yakko, Wakko and Dot have caused far too much damage this year, and since Ralph was unable to keep them under control, he is being fired.

That night, as Plotz is figuring out how to cut costs, Slappy Squirrel suddenly appears in front of him as a ghost (because "the studio keeps givin' me these lousy cameos"). She tells him that he is going to be visited by three ghosts tonight, but she does not know why because she lost the next page of her script. After Slappy storms out, saying she needs to get a new agent, Plotz figures that he must have been hallucinating.

Just then, the phone rings, and when Plotz answers it, Wakko comes out of it as the Ghost of Christmas Past. Using a movie projector, Wakko shows home movies displaying how cruel Plotz has always been, including suing the doctor after he was born, demanding Santa Claus bring him a horse for Christmas (he got a pony instead), and firing his own father when he took control of the studio.

After Wakko and the film projector disappear, Plotz again thinks that he is having a bad dream, but then a Christmas gift box appears on his desk. When he opens it, out pops Dot, portraying the Ghost of Christmas Present ("It's a pun, get it?"). Dot takes Plotz to the Happy Tail Trailer Park, where Ralph lives with his wife and his adopted son. It is revealed here that Ralph Jr. is so upset about his adoptive father being fired that he plans to someday get even with Plotz. Upon seeing this, Plotz begs Dot to take him away from this place.

Plotz figures he should get out before the third ghost shows up. The clock strikes midnight, and Plotz tries to call for security before remembering that Ralph was the security guard. A hooded, Grim Reaper-like specter appears and spooks the CEO before revealing itself to be Yakko as the Ghost of Christmas Future. After an extravagant musical number, Yakko brings Plotz to the future, where Ralph Jr. is now the CEO of Warner Bros. When Plotz asks what happens to him in this future, Yakko brings him outside and shows him his future self - the elderly Plotz is now stuck as the studio's security guard who is constantly tormented by the Warners, and even worse, is then immediately fired for failing to catch the Warners one time too many.

Upon seeing this vision, Plotz breaks down sobbing and then awakens in his office. Looking outside his window, he sees Yakko, Wakko and Dot, who tell him that today is Christmas Day. Seeing that he still has a chance to change the future, Plotz tosses a bag of money to the Warners and tells them to go buy the biggest fruitcake they can find and have it delivered to Ralph. Plotz then heads to the trailer where Ralph and his family live, bringing a large pile of presents for them. He tells Ralph that he is rehiring him and acts as nice as he can to Ralph Jr. in hopes that he won't take over the studio in the future. Yakko, Wakko and Dot then arrive, saying they have brought over the biggest fruitcake possible. When Plotz comes outside to see it, it is shown that the gigantic fruitcake is being carried by a helicopter, which then drops it on Plotz. The Warners start to eat the fruitcake, saying they should have Plotz out from under it by Easter. 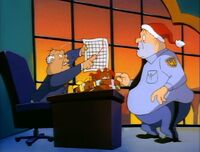 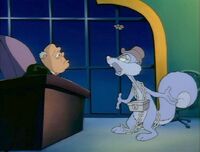 Slappy in the Jacob Marley role. 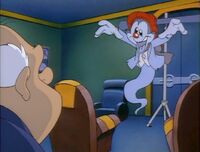 Wakko as the ghost of Christmas Past. 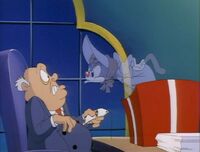 "Who're you callin' a fruitcake!?" 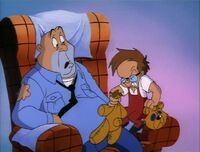 Ralph Jr. swears revenge on Plotz for firing his dad. 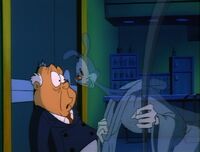 Yakko makes his entrance as the Ghost of Christmas Future. 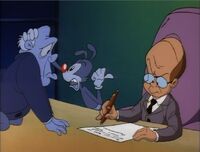 In the future he shows Plotz, Ralph Jr. has taken over the studio... 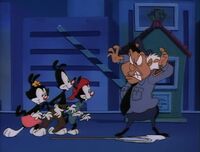 ...and Plotz is now the security guard tormented by the Warners. 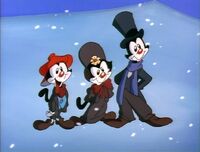 "Why, it's Christmas Day! Whoa, dumber than advertised." 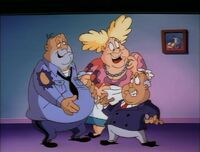 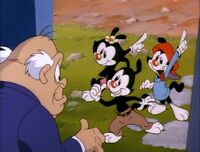 "We got the biggest fruitcake we could find!"