Jean Shepherd (based upon the novel: "In God We Trust, All Others Pay Cash" by)
Nat Mauldin (teleplay)

A Christmas Story 2 is a direct-to-video film produced by Warner Premiere, released on October 30, 2012. As the title suggests, it is the sequel to the 1983 MGM film A Christmas Story, and is also the only film based on Jean Shepherd's stories to not include any input from him (as he had died in October 1999).

Set six years following the events of the original film, in the mid-1940's, Ralphie Parker is now a socially awkward teenager interested in cars and girls. He has his eye on Drucilla Gootrad, a beautiful girl who is dating the star quarterback. He also has his eye on a green 1938 Mercury convertible, but he can't afford it yet. Ralphie hopes that if he can get the car, he can also get the girl.

One day, he is inside the car on the lot while his father is talking to the owner. Being the bumbling geek that he is, Ralphie accidentally puts it in reverse. Since he doesn't know how to drive yet, he doesn't know how to stop it, and he backs it into a lightpole, causing $85 worth of damage. The auto dealer threatens to call the police on Ralphie if he can't pay the damages, and he gives him until Christmas Eve do to so. Ralphie goes to his father, known only as the Old Man for the money, but the refuses to help him out, so Ralphie and his friends Flick and Schwartz take jobs at Higbee's Department Store.

Meanwhile, the Old Man's notoriously cheap ways are nearly ruining Christmas. Their troublesome furnace is on it's last legs, but he would rather replace it with a used furnace instead of paying $395 for a brand new one. He also won't pay 40 cents a pound for a turkey, and says he will go ice fishing and catch Christmas dinner. The Old Man spends several days on the ice, but has no luck. One day, Mother joins him and wants to try her hand at fishing. Almost immediately, she catches a huge fish, but the Old Man lets it get away. He blames her for being a jinx and he leaves him on the ice.

At Higbee's, Ralphie and his friends are given several jobs to do, but they screw up every one of them. Finally, they are given the job of being Santa's elves. The store Santa is surly to the kids, and makes fun of everything they ask for. One obviously poor child just wants a car tire, and Santa has him thrown out of the store. Ralphie has had enough and yells at Santa for not being nice to the kids, which leads to Santa quitting his job. This also causes the trio to be fired by the store manager.

Because he still doesn't have enough money to pay for the damages, Ralphie goes back the next day and begs for another chance. The manager relents and makes him dress up in a reindeer costume to wear outside the store. He promptly knocks over the Salvation Army kettle, and the money falls out. While helping pick it up, he sees a man take a $5 bill and pocket it. Ralphie confronts the man about it, and gets punched in the gut for his troubles, but he got the money back. While that was going on, Drucilla and her boyfriend witnessed the events. He laughed at Ralphie, but she didn't.

Despite his problems that day, Ralphie has now earned enough money and is on his way to pay the damages. However, he sees a homeless family in an alleyway, and their kid is the one who asked Santa for the car tire. He then sees that the family's truck is missing a tire, but Ralphie walks on. While passing a pawn shop with a familiar looking lamp in the front window, Ralphie can't stop thinking about that kid. He turns around and heads back down that alley. He uses his money to pay for a new tire and takes the family out to dinner. Back at home, the Old Man once again comes home empty handed, and still refuses to quit until he catches a fish. At her wit's end, Mother goes to her emergency stash of money and buys a fish from the market.

The next day is Christmas Eve, and the family sits down for Christmas dinner. The Old Man is about to tell Ralphie and his brother Randy that he failed when Mother comes in with a cooked fish. A thrilled Old Man plays along, but he realizes that he is being a cheapskate and promises to change his ways. Later, Ralphie goes to the dealership with the remaining money after helping the homeless family, preparing to face the consequences. The auto dealer takes what he has and calls it even, because someone already bought the Mercury. A heartbroken Ralphie starts to head home, but makes a stop first.

The next morning is Christmas, and Ralphie and Randy tear open their gifts. Both enjoy what they got, then Ralphie tells his Dad to go into the basement. The Old Man emerges from it with the Leg Lamp! He is beyond thrilled, while Mother is definitely not. Ralphie then notices a car key on the Christmas tree with his name on it. The Old Man tells him to look in the driveway. Ralphie does, and sees the Mercury. His dad was the one who bought it.

Later that day, Ralphie is waxing the car when it begins to roll backwards into the street. Someone comes up and stops the car from rolling and tells Ralphie to put it in park. After he does, he goes to thank the person, and sees it's Drucilla. She tells him that she admired him for standing up to that guy in front of the store, and she broke up with the quarterback. The movie ends with Drucilla kissing Ralphie in the Mercury while they drive off into the sunset. 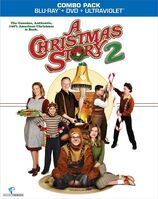 Retrieved from "https://christmas-specials.fandom.com/wiki/A_Christmas_Story_2?oldid=148729"
Community content is available under CC-BY-SA unless otherwise noted.