VHS
DVD
Apple TV
Amazon Video
Boomerang
HBO Max
A Flintstone Christmas is the second Christmas special based on the Hanna-Barbera animated series The Flintstones (though it is the third Flintstones Christmas special in chronological order), originally aired on NBC on December 7, 1977. It is not to be confused with the original series episode "Christmas Flintstone", though the basic plot is more or less the same. It has since reaired on TNT, Cartoon Network, Boomerang, and once on ABC Family (as part of the 25 Days of Christmas).

The special opens the night before Christmas Eve, as Fred and Barney are walking through downtown Bedrock. Barney is donating change to all the Salvation Army Santas they pass by, with Fred remarking "You'd never catch me in one of those outfits" (apparently forgetting that he played Santa at Macyrock's once before).

The next morning, Fred is putting the finishing touches on decorating his family's Christmas tree when the Rubbles come by. After the tree is decorated, Wilma and Betty ask Fred to play Santa Claus at the Ladies Auxiliary's Christmas party for the Bedrock Orphanage, but he refuses, saying his coworkers would never let him live it down. When Fred arrives at the rock quarry later that morning, though, he is informed that Mr. Slate wants to see him. Fred ponders as to why his boss wants to see him about as he makes his way to Slate's office, worried that he is being fired. As it turns out, Mr. Slate and his wife also want Fred to play Santa at the Ladies Auxiliary's party at the orphanage; this time, Fred agrees to the offer.

When Fred arrives at home that evening, he tells Wilma that he has decided to accept the offer of playing Santa at the party. He then tries on the Santa Claus suit that Mr. Slate provided for him, and Barney comes by. Wilma and Betty leave early to get things ready for the party, taking Pebbles and Bamm-Bamm (who are of elementary school age, which indicates that this special takes place a few years after A Flintstones' Christmas Carol and several years before The Pebbles and Bamm-Bamm Show) with them. As soon as their wives and kids have left, though, Fred and Barney hear a noise outside and find a man in a Santa outfit having crashed in front of Fred's house. The man has sprained his ankle, so they bring him inside so he can use Fred's phone, which he uses to call the North Pole. Fred thinks it is a crazy person who thinks he is Santa Claus and has escaped from the asylum, but then Barney looks at Fred's roof and sees Santa's magic sleigh and reindeer. Upon seeing this and realizing that this is the real Santa, Fred and Barney find out that Santa has also caught a cold. Fred suggests that Santa should get someone to fill in for him this Christmas, at which point Barney points out that Fred would be perfect for that. With that, Santa gives Barney an elf costume and lends his own suit to Fred, and then gives them some pointers on flying the sleigh.

Fred and Barney take off on the journey, and despite some initial troubles on their first few stops, manage to deposit presents halfway around the world quickly. But they then suddenly get caught in a snowstorm, which shakes up the sleigh so much that the bags of presents fall out. Fred and Barney manage to call up Santa for help on the sleigh's CB radio; he advises them to to his workshop and the North Pole to pick up another batch of toys. At the North Pole, Fred and Barney meet Mrs. Claus, who shows them around the workshop. After taking part in a "Brand New Kind of Christmas Song" with the elves, Fred and Barney take off into the sky again, wishing Merry Christmas to Mrs. Claus and the elves. They resume delivering the presents with no problem, but then Fred realizes that they have forgotten about the Ladies Auxiliary's party at the orphanage. He gives Santa another call on the CB radio, and Santa advises them to push the sleigh's super-speed button, which allows them to speed up the progress on their deliveries.

Meanwhile, at the party, the kids have become impatient in waiting for Santa, and Mr. Slate threatens to fire Fred if he doesn't show up within the next minute. Pebbles expresses worry that Santa is not coming, but Wilma tells her that she should not give up hope. At that point, Fred and Barney finally arrive, coming down the orphanage's chimney. Mr. Slate, impressed with that entrance, gleefully welcomes them to the party and asks them to start handing out the presents. Fred finds that the bag of toys appears to be empty from their deliveries, but fortunately, he is able to magically produce enough presents for all the kids in the building. Barney then remembers that they still left the real Santa back at Fred's house, and they rush back to Fred's house.

Back at Fred's house, Santa congratulates the duo on a job well done and takes back his suit. After Santa leaves, Wilma and Betty, who are rather angry that their husbands took so long to show up at the party and then skipped out on their clean-up assignments, arrive home with the kids. Fred and Barney explain to their wives that the reason they took so long was because they were busy delivering Santa Claus's presents. Wilma and Betty have a hard time believing that, but they are willing to forgive them for what happened. The two couples then exchange presents, with Fred's present for Wilma (a pair of earrings) magically coming in from the chimney. Pebbles and Bamm-Bamm then see Santa flying away in the sky, at which point Fred and Barney rush to the window and wave to Santa.

Songs featured in the special include:

"Which One is the Real Santa Claus?", "Sounds of Christmas Day", and "Hope" were previously featured in A Christmas Story five years earlier. "It's Our Favorite Time of the Year", sung here by Fred, was later reused in Yogi's First Christmas.

The special made its home video debut in 1988, when it was released on VHS by Kids Klassics Home Video. Turner Home Entertainment released it on VHS again, this time as part of their Cartoon Network Christmas video collection, in 1996. The 1996 tape also included the Huckleberry Hound short "Ski Champ Chump" and the World Premiere Toon Dino in "Stay Out!"

To date, the special's only DVD release was on Warner Archive's A Flintstone Christmas Collection manufacture-on-demand DVD, which was released on September 27, 2011, and also included A Flintstone Family Christmas. 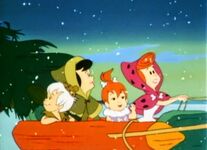 Wilma, Betty and the kids bring home a Christmas tree. 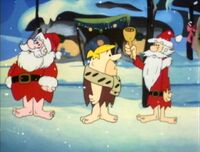 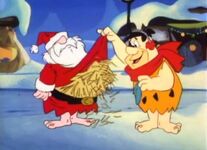 "Here's another with a belly that is stuffed with straw!" 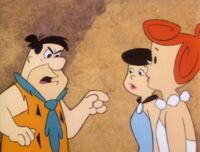 Fred refuses to play Santa for the Christmas party when Wilma and Betty ask him... 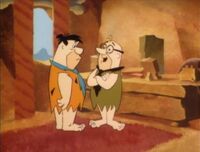 ...but he eventually agrees after Mr. Slate asks him to do it. 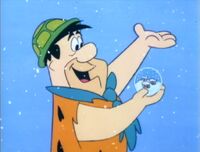 Fred singing "It's Our Favorite Time of the Year". 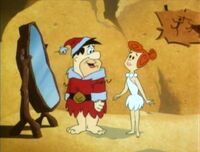 Fred tries on the Santa suit that Mr. Slate gave him. 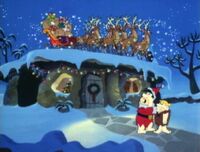 Fred sees Santa's reindeer up on his roof. 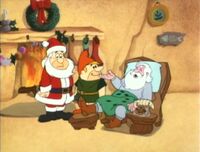 Santa has Fred and Barney fill in for him. 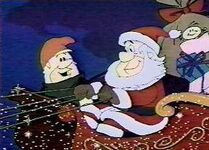 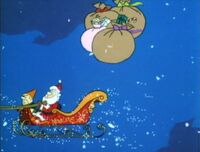 Unfortunately, they lose the toys in a storm midway through. 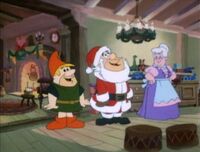 Fred and Barney go to Santa's workshop to reload the sleigh. 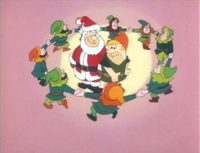 The elves perform a "Brand New Kind of Christmas Song". 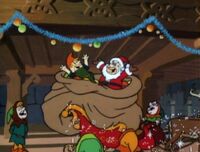 Fred and Barney get the sleigh reloaded. 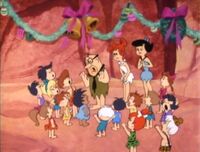 Meanwhile, the kids at the party are getting impatient for Santa's arrival. 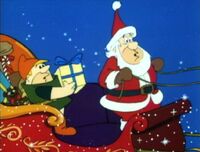 Fred realizes he forgot about the party. 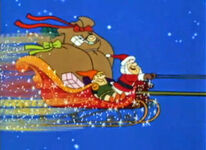 Fortunately, the super-speed button helps them out. 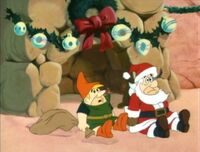 Fred and Barney make it to the party just in time. 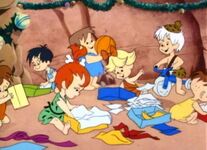 The kids opening their presents. 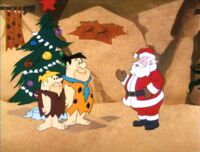 Santa congratulates Fred and Barney on how well they did. 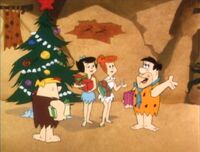 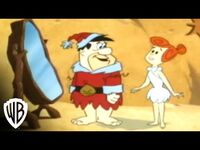 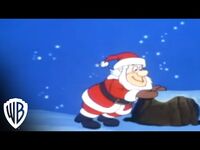