A Garfield Christmas Special (also called A Garfield Christmas for short) is an animated Christmas special based on the newspaper comic strip Garfield by Jim Davis, originally broadcast on CBS on December 21, 1987. Davis based the story on his experiences of celebrating Christmas with his family on their farm in Indiana. The special was nominated for the 1988 Primetime Creative Arts Emmy Award for Outstanding Animated Program; however, it lost to A Claymation Christmas Celebration (which, oddly enough, had premiered right after it).

In a brightly decorated house, Garfield is awakened by Jon, dressed as an elf, who says that it is Christmas morning and Garfield must be treated to a large amount of lasagna before opening his presents. After Garfield finishes eating the lasagna, Jon presents him with a robotic Santa Claus that reads minds and produces whatever Garfield wants. Garfield is pleased with this, until Jon actually wakes Garfield up and it is revealed that Garfield was just dreaming. Jon tells Garfield that it is Christmas Eve, and that they are going to the countryside to celebrate Christmas with Jon's family on their farm. Garfield, not very keen on the idea, asks why they always have to go to the Arbuckle farm and wonders why Jon's family can never just come to Jon's house instead.

As Jon, Garfield, and Odie drive off to the farm, Jon talks (and sings) about what Christmas was like when he was a boy, all the while Garfield makes sarcastic comments. They then arrive at the Arbuckle farmhouse and greet Jon's family (in their first animated appearance) - the sweet and always cooking Mom, hard-working farmer Dad, mischievous younger brother Doc Boy, and the tough-as-nails Grandma. After Grandma remarks that they need to go get dinner finished, Garfield observes that he and Grandma are going to get along just fine.

Jon, Garfield, and Odie go outside for a walk, while Grandma spikes Mom's sausage gravy by adding chili powder. Jon and Garfield return inside for supper, while Odie gets to work on a secret project and then sneaks back into the house. Garfield goes and takes a taste-test of the incredibly hot sausage gravy, and declares that it is perfect. At dinner, Doc Boy is asked to say grace for the family, and Grandma bonks him on the head with a spoon when he doesn't know what to say. When he goes on too long with saying grace, Grandma bonks him on the head again. While Mom asks Jon which of the potatoes and pies he would like, Grandma sneaks some of her food to Garfield and Odie.

After dinner, they decorate the tree. They have trouble getting the star on the top of the tree, so Jon has Garfield do it, since he can climb trees. Garfield successfully makes it up the tree and puts the star on top, but then falls down the tree, knocking down some of the decorations. Next, Mom asks Doc Boy to play a song on the piano. He starts playing and singing "O Christmas Tree" terribly off-key, so Grandma shoves him aside and plays and sings the song herself. Afterward, Mom plays "Christmas in Your Heart", while Garfield goes to sit on Grandma's lap. Grandma tells him about her beloved, deceased husband, who always enjoyed Christmas even when he tried to pretend otherwise, and concludes by saying that Christmas Eve is the night she misses him the most. After finishing the song, Mom tells Dad that it is time for him to read Binky, the Clown Who Saved Christmas. Dad is not at all keen about this, as he is tired of reading the story every year, but reluctantly reads it anyway.

Later that night, Odie sneaks out to the barn and Garfield becomes suspicious about the dog's activity. Garfield follows Odie to the barn and sees him making something out of a piece of wood, some wire, a plunger handle, and a hand rake. While there, Garfield stumbles upon some very old letters and finds out that it must be fifty years old. Meanwhile, Jon and Doc Boy unexpectedly wake Dad up at 1:30 a.m. and ask him if it is time to open presents, but Dad angrily tells them to go back to bed, despite Jon and Doc Boy arguing that it is technically Christmas morning now.

The next morning, after the family has just finished opening their presents, Garfield gives Grandma the letters he found in the barn. The letters, it turns out, were love notes written to Grandma by her husband from when they first met each other and married. Odie then reveals that he had been busy making a Christmas gift for Garfield - a homemade back-scratcher. In a rare glimpse at Garfield's sensitive side, Garfield gladly thanks Odie for the gift he made and says what he has realized about Christmas - "it's not the giving, it's not the getting; it's the loving."

The instrumental to "Here Comes Garfield", the titular theme song from the first Garfield special, can be heard in the post-title scene at the beginning (after Jon awakens Garfield from his dream).

The special premiered on CBS on December 21, 1987, and was annually broadcast on the network (often alongside fellow comic strip-based special A Charlie Brown Christmas) from then until 2000. It was later aired on ABC Family as part of the 25 Days of Christmas in 2008 and 2009.

The special was made available on VHS in 1991. In 2004, following up the release of the first live-action Garfield movie, it was featured on 20th Century Fox Home Entertainment's Garfield: Holiday Celebrations DVD, which also included Garfield's Halloween Adventure and A Garfield Thanksgiving. It was later made available again on Anderson Digital's Garfield Holiday Collection DVD, released on November 4, 2014; in addition to the three holiday specials, this DVD also included two other Garfield specials that Jim Davis considered his personal favorites - Garfield on the Town and Garfield in Paradise. A Garfield Christmas Special and A Garfield Thanksgiving were most recently included (this time without Garfield's Halloween Adventure) on the Happy Holidays, Garfield! DVD, released by PBS Distribution's Skiprope division on September 12, 2017.

Like A Charlie Brown Christmas before it, A Garfield Christmas Special received several re-edits after its earliest airings. In 1991, the following edits were made:

Aside from the edits made to the special in 1991, the comic book adaptation contains a few scenes that were never featured in the actual special. Presumably, these scenes were in the original script (and possibly even storyboarded), but were most likely cut for time. These scenes include: 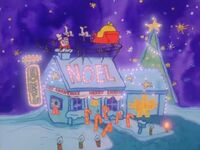 Jon's house as it appears in Garfield's dream sequence. 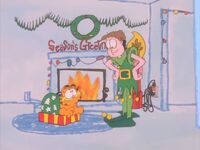 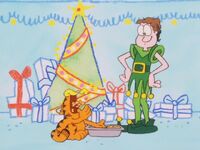 Garfield eating his "breakfast lasagnas" in his dream. 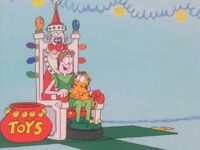 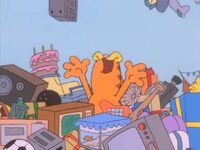 Garfield "swims" about in the things he wished for on the gift-giving machine. 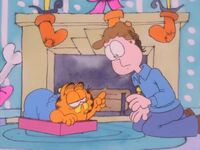 Jon wakes Garfield out of his dream. 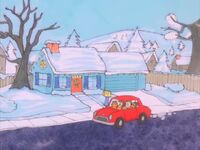 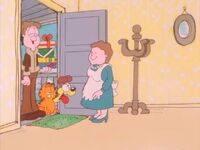 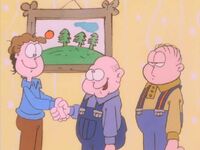 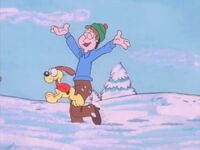 Jon and Odie having fun in the snow. 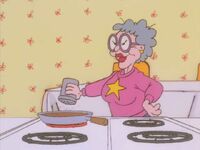 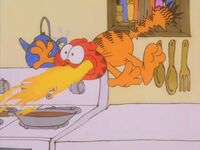 Garfield having gotten a taste of the sausage gravy. 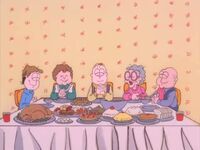 The Arbuckles sit down to dinner. 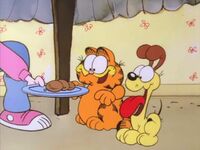 Grandma gives some of her dinner to Garfield and Odie. 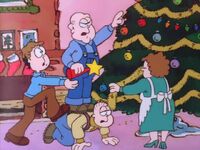 The Arbuckles decorate their tree. 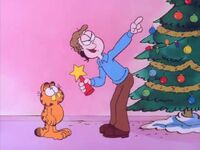 Jon assigns Garfield to put the star on top. 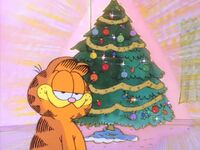 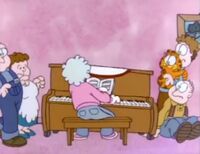 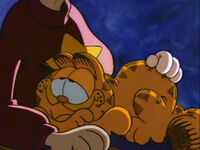 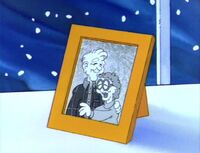 A framed photo of Grandma with her late husband. 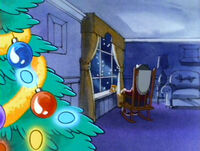 "I think this is the night I miss him the most." 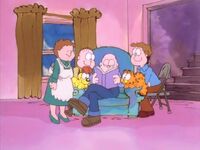 Dad has to read Binky, the Clown Who Saved Christmas. 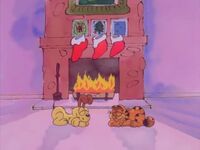 Garfield and Odie sleeping by the fireplace. 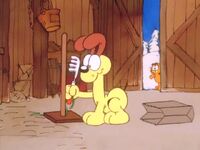 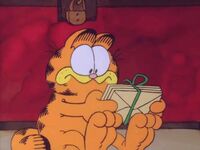 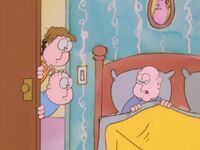 Dad is annoyed about Jon and Doc Boy wanting to open their presents at 1:00 AM. 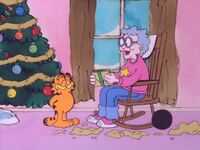 Garfield gives the letters to Grandma. 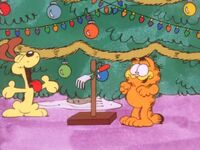 Odie presents Garfield with the backscratcher. 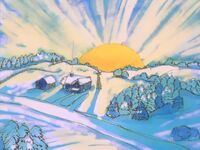 The closing shot of the Christmas morning sunrise.