"A Jetson Christmas Carol" (incorrectly referred to as "The Jetsons Christmas Carol" on the cover to the 1996 VHS release) is the Christmas episode of the Hanna-Barbera animated sitcom The Jetsons, originally aired in syndication on December 13, 1985. As the title suggests, it is loosely based on Charles Dickens' classic story, A Christmas Carol.

It is Christmas Eve in Orbit City, and the Jetsons are planning to celebrate it the only way they can — as a family. However, George and the other employees of Spacely Space Sprockets are hounded by the intergalactic Scrooge of the company, Mr. Spacely, who detests the holiday season so much that he forces George to work overtime and head home late that night.

Meanwhile, Jane, Judy, and Elroy head out to do some last-minute Christmas shopping at the mall. Upon returning home, they find that Astro took a peek at the Christmas presents underneath the tree. He opens his present early and finds a robot cat that he really enjoys chasing. However, he soon crashes into a wall doing so, which also wrecks the toy. In the process, Astro accidentally swallows one of the toy’s gears, which causes him to become deathly ill. When George finally gets home, he discovers what has happened to Astro, and it seems there is no hope for his beloved friend, since all the veterinarian offices and pet hospitals have closed early for Christmas Eve.

Back at Spacely's plant, Spacely counts his money and decides to take a small nap before thinking about making any bank deposits. Hovering between dreams and reality, he is suddenly visited by the ghost of his old, previously unmentioned business partner, Marsley. The ghost warns Spacely that three more ghosts will visit during the night to show the Scrooge-like CEO the error of his ways. Before too long, the Ghosts of Christmases Past, Present, and Yet To Be follow suit.

The Ghost of Christmas Past — a living, talking adding machine — shows Spacely that his younger self was as selfish and cheap as he is now, and then reveals the time when Spacely, as a young adult, almost drove his his wife-to-be away due to his love of money. After the first spirit's visit, the Ghost of Christmas Present — who turns out to be a talking gift box wrapped with a bow (pardon the pun) — shows Spacely that the Jetsons are sadly watching Astro suffer in excruciating pain and facing the thought of losing him.

Then, when Spacely attempts to escape with his money, the Ghost of Christmas Yet To Be — who resembles an archaic Babbage thinking machine — shows Spacely the future. He believes that his future looks bright when he sees a large mansion, but he gets the shock of his life when he discovers that it belongs to the Jetsons. He also realizes that George had sued Spacely Sprockets for the death of his dog and best friend, Astro, because Spacely Sprockets had made the gear that Astro swallowed, and it ended up killing him.

After realizing that he would be ruined, Spacely hurries to the Jetsons' apartment, bringing along his personal veterinarian, who extracts the sprocket from Astro's stomach and cures him. He also presents Jane, Judy, Elroy, Rosie, and Orbitty with the gifts they wanted for Christmas. As for George, Spacely promises him a big raise and leaves, wishing the Jetsons a Merry Christmas. The episode ends with the Jetsons singing the classic song "We Wish You a Merry Christmas". Astro sings the final line and smiles before the episode fades out.

Following its original broadcast in syndication, the episode re-aired as part of the annual Christmas programming on TBS, TNT, and Cartoon Network in the 1990s. It was last seen airing as part of Boomerang's annual Christmas marathons from 2000 to 2015.

"A Jetson Christmas Carol" was released on VHS for the first time as part of the Hanna-Barbera Super Stars video series in 1989. Two years later, it was then included on the Hanna-Barbera Christmas Laserdisc, which also featured "Christmas Flintstone" and Yogi Bear's All-Star Comedy Christmas Caper. It was released on VHS again in 1996 as one of Cartoon Network's Christmas videos on September 24, 1996. It made its DVD debut on Warner Archive's The Jetsons: Season 2, Volume 2 manufacture-on-demand DVD set, released on November 8, 2011. It will be made available on the format again as part of The Jetsons: The Complete Series DVD set, to be released on October 13, 2020. 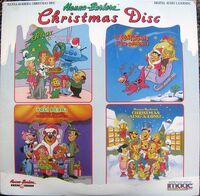 Retrieved from "https://christmas-specials.fandom.com/wiki/A_Jetson_Christmas_Carol?oldid=188046"
Community content is available under CC-BY-SA unless otherwise noted.