DVD
A Johnny Bravo Christmas is the second Christmas episode of the Cartoon Network original series Johnny Bravo, written and co-directed by the show's creator, Van Partible. Produced as a half-hour special between the show's third and fourth seasons, it was originally broadcast on December 7, 2001.

It is Christmas Eve in Aron City, and Johnny is helping his mother, Bunny, organize their house for Christmas. While cleaning out the sofa cushions, Johnny finds the letters they wrote to Santa Claus, and is alarmed when he realizes he was supposed to mail them last month and forgot to do so (he had gotten distracted by a new episode of one of his favorite TV shows). Fearing that he will not get any of the presents he wanted from Santa, Johnny rushes off to the post office to mail the letters. Unfortunately, the employees tell him that they cannot get his letters to Santa by tonight, and everyone at the building laughs at him for thinking this.

Johnny storms off, calling everything stupid, when little Suzy shows up. After a brief argument with her, Johnny explains his predicament to her. But rather than take Suzy's suggestion of sending an e-mail to Santa, Johnny decides to travel to the North Pole and bring the letters to Santa himself. However, he does not know Santa's home address; Suzy says that she knows Santa's address, but she will only help him if he allows her to come with him on his journey. Johnny reluctantly agrees to the deal.

At the Aron City airport, Johnny and Suzy find that all of the planes scheduled to go to the North Pole have already left, except for one. Because the line for plane tickets is too long, they sneak on board the plane in the baggage. After they make it into the cargo hold of the plane, a security guard comes to see if there are any stowaways, but they manage to fool him by pretending to be a lamp and a fan. After the guard leaves, the pair find a group of caged circus animals elsewhere in the cargo hold. When the animals ask why they would want to celebrate Christmas, Suzy explains all about the holiday to them and gives them some presents, during which Johnny finds some of the circus equipment and starts fooling around with it. When Amy the elephant mentions that she has always wanted to leave the circus and return to nature, Suzy uses her Buttercup Scout pocket knife to let the animals out of the cages. Johnny tries to get the animals back in the cages, but Rob the snake accidentally opens the cargo door, and they all spill out of the plane and land in a sunny field.

The animals run off to enjoy nature, but Johnny is upset that now he may not be able to get to the North Pole. Suzy, however, manages to build a CB radio, and comes in contact with a female trucker. The trucker shows up with her beautiful French niece, Monique, who starts beating up Johnny when he tries to sweet-talk her. The trucker explains that she can give the two a lift to the nearby airport, but since there are only three seat-belts in the front row, Johnny has to ride in the back with the trucker's pigs.

Upon arriving at the airport, Johnny and Suzy find a pilot named Leo, who is willing to take them to the North Pole. Despite the fact that his plane is in very bad condition for flight, and the fact that Leo has only just gotten his license this morning, Johnny agrees to let him bring them there. While in midair, Suzy shows Santa's address, which she has on a cereal box top. Leo, however, points out that it does not display the latitude and longitude, leading the two to realize that the address is fake. Just then, Donny Osmond shows up and is brought aboard the plane. After Suzy explains their dilemma (in song), Donny answers that he actually does know Santa's address, because he visits Santa every year to help out. However, when Leo gets caught up in singing along with Suzy and Donny, the plane comes close to crashing into Santa's village; fortunately, two of Santa's reindeer show up to grab the plane, dropping it right outside.

When the group sees Santa loading up his sleigh, Johnny rushes up to him and asks if he remembers him from last year's incident; Santa responds by punching Johnny with a giant boxing glove. Santa also knows who Suzy and Leo are, but strangely has trouble recognizing Donny Osmond, despite the singer's earlier statement. Johnny presents his and his mother's letters to Santa; Santa reads the first letter, which lists things that Johnny would want, but was written by Bunny. Johnny, realizing that his mother asked for gifts for him, promptly takes his own letter, crumples it up, and swallows it. Santa unfortunately says that he cannot fulfill Johnny or his mother's requests, but then an elf named Salvador shows up, bringing a last-minute "naughty or nice" update. Santa says he can now bring two presents to Johnny and his mom, but Johnny says that he would prefer that both of the presents to be given to Bunny, because all he really wanted for Christmas was to make her happy. The elves manage to fix up Leo's plane, allowing the group to return home.

Back home, Johnny tells his mother about his adventure and apologizes for not mailing the letters last month. However, Bunny is just happy that he is back home with her for Christmas, because that is more important than any present. Suzy, Leo, and Donny then arrive, along with the other citizens of Aron City; Leo explains that Suzy spread the word about Johnny's good deed at the North Pole, and everyone decided to come wish Johnny and his mother a merry Christmas. The special closes on the people throwing a Christmas party at the Bravo residence, during which Johnny starts sweet-talking to a female guest, only to get beaten up as a result.

To date, the special's only home video release was on the Cartoon Network Christmas: Yuletide Follies DVD, released by Warner Home Video on October 5, 2004. 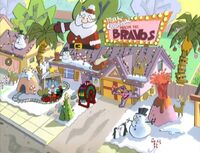 The Bravo house decorated for Christmas. 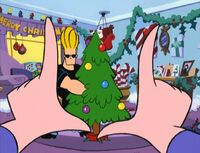 Johnny helping his mother set up the tree. 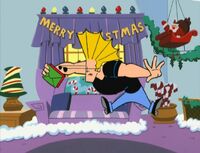 Johnny finds the letters he was supposed to mail to Santa. 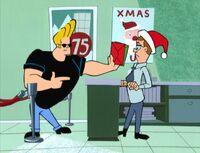 "I need to get these letters to the North Pole by tonight!" 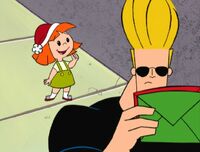 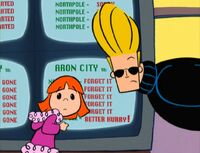 Johnny and Suzy have trouble getting on a plane to the North Pole... 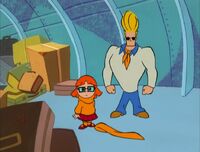 ...so they sneak into one of the flights as baggage. 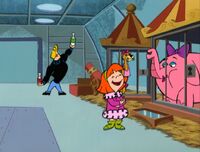 Suzy tells the circus animals all about Christmas... 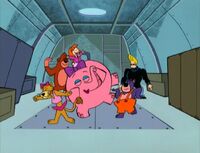 ...and lets them out of their cages. 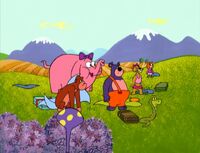 They end up accidentally dropping out of the plane. 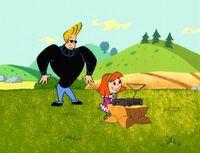 Suzy builds a CB radio to call for help. 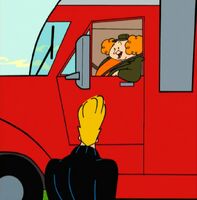 A trucker offers Johnny and Suzy a lift to the airport... 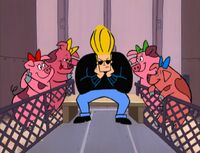 ...but Johnny has to ride in the back. 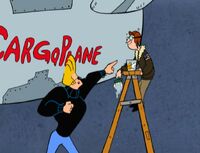 "Could you fly us to the North Pole?"

Leo flies Johnny and Suzy to the North Pole...

...but then Johnny and Suzy realize the address they have is fake. 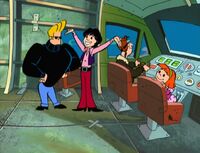 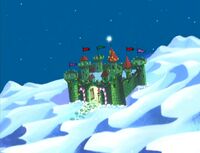 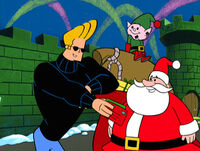 Johnny delivers his letters to Santa. 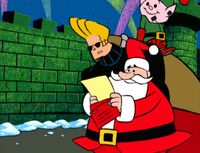 Johnny realizes his mother wrote asking for presents for him... 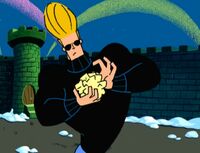 ...and crumples up his own letter. 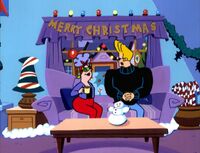 Johnny apologizes to his mom for not mailing the letters before. 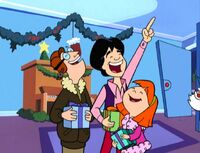 Suzy, Leo, and Donny singing "Joy to the World".
Add a photo to this gallery

Retrieved from "https://christmas-specials.fandom.com/wiki/A_Johnny_Bravo_Christmas?oldid=173292"
Community content is available under CC-BY-SA unless otherwise noted.