"A Lost Claus" is a special half-hour Christmas episode of the Cartoon Network original series Foster's Home for Imaginary Friends, aired on December 1, 2005, as the tenth episode of the show's third season. It was written by Lauren Faust and directed by her husband, series creator Craig McCracken. It features homages to A Charlie Brown Christmas in sight gags and the jazz musical stylings of that Christmas tradition, and also spoofs the Charles Dickens story A Christmas Carol. The episode won an Annie Award in 2005 for McCracken, Mike Moon, David Dunnet and Martin Absolabehere for "Best Design in an Animated TV Series".

It is the day before Christmas Eve, and Mac is on his way to see his imaginary friend, Blooregard "Bloo" Q. Kazoo, at Foster's Home for Imaginary Friends, just as they are preparing for Christmas. After Mac puts the star atop the Christmas tree, Santa Claus suddenly arrives and asks Mac and Bloo what they want for Christmas. Just as they are about to tell him their wish lists, a second Santa comes in. Ultimately, after both Bloo and Mac exchange larger (and more outrageous) gifts, the two Santas get into a fistfight. Frankie soon breaks that up, and brings them along with a whole bunch of other Santas of all shapes and sizes to Mr. Herriman's office, explaining that every year, kids get so excited about Santa that they create imaginary ones "that are about as real as my Aunt Fanny". Upon hearing that, Mac then has a breakdown disbelieving that there is no such thing as Santa.

Bloo, who is upset that he will be getting only one gift for Christmas, decides to do some scientific tests disproving Mac's theory that there is no Santa. So on Christmas Eve, he sends Wilt around the world in a sleigh with winged unicorns in place of reindeer. Then he tries sending Eduardo down the chimney of the house, but Eduardo gets stuck in the process. Then Bloo and Mac go to a mall to prove Santa exists, only to find out that the Mall Santa is none other than Coco, who is working there to pay for a vacation home. She is then outed as a fraud when she is accidentally debearded by Mac. At the home, Madame Foster tells Mac that it's all a phase that all kids go through and that sooner or later, the truth will find him out. So when he gets home, Mac asks Santa for the one thing that will make him believe Santa does exist: underwear.

Meanwhile, Bloo is still distraught over the fact that he is only getting one Christmas present while an Imaginary Friend named Moishe, a dreidel, rubs salt into the wounds by telling Bloo he's getting eight gifts (a reference to Hanukkah). Bloo then comes up with an idea: scaring the wits out of Mr. Herriman into giving everyone more gifts. Taking a cue from A Christmas Carol, he dresses first as the ghost of Bob Marley (instead of Jacob Marley), then later dresses as "The Ghost of a Christmas Present" and a robot (representing The Ghost of Christmas Yet to Come), frightening Mr. Herriman out of mind so much that he misunderstands Bloo's request for more presents, and as a result, decides instead to outright cancel Christmas at the home, much to Mac's dismay.

Christmas morning comes and Mac, along with his mom and his older brother Terrance, are unwrapping presents, and Mac is unhappy to not find any underwear in the batch, so he asks his mother "What does a guy have to do to get underwear for Christmas?", and then walks off to Foster's. When he arrives, though, he suddenly realizes that Christmas came as a miracle. All the imaginary friends are playing with their gifts while Wilt explains that Santa brought him home, Eduardo says he felt something pushing him down the chimney and Coco's lawsuit against the mall for wrongful termination was settled out of court. Frankie calls the police and describes what happened, believing at last there is a Santa Claus. Madame Foster gives Mac a Christmas stocking with his name on it, and finds out that it's filled with underwear, and he too believes in Santa. As for Bloo, he wound up with a pile of coal, and vows revenge against Santa. During the end credits, Mr. Herriman panics, trying to tell the ghosts that he tried to take out the presents and pleads to be spared punishment.

The episode was made available on Warner Archive's Foster's Home for Imaginary Friends: Season 3 manufacture-on-demand DVD set, released on November 4, 2014. 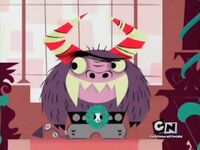 Eduardo is dressed up for Christmas. 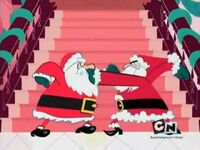 Two of the imaginary Santas duke it out... 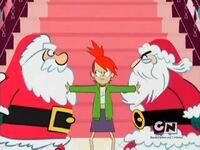 ...until Frankie puts a stop to it. 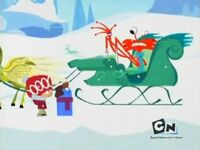 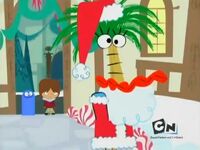 Coco goes to work as a Mall Santa. 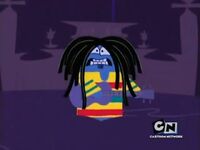 Bloo scares Mr. Herriman as the spirit of Bob Marley. 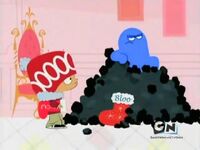 Much to his dismay, Bloo gets a pile of coal.
Add a photo to this gallery

Retrieved from "https://christmas-specials.fandom.com/wiki/A_Lost_Claus?oldid=192737"
Community content is available under CC-BY-SA unless otherwise noted.