A Pinky and the Brain Christmas

At Acme Labs, Pinky is busy writing a letter to Santa Claus, when Brain tries out his new invention on him - a doll in Brain's likeness, which broadcasts hypnotic orders from him. After finishing the demonstration, Brain explains that the doll, which he has named "Noodle Noggin", is part of his current scheme for world domination. Despite Pinky questioning him if it is really a good idea to try to take over the world at Christmas time, Brain explains that he plans to distribute a Noodle Noggin doll into every home on the planet. Then, once everyone has gotten the dolls, he will broadcast a hypnotic suggestion to everyone, telling them that he should be their ruler. However, the plan requires to have 1,000,000,000 Noodle Noggin dolls built, a task that would take 137 years for the mice to accomplish on their own, so Brain needs to find a huge group of workers who can make that many dolls in a short amount of time. Brain then notices a want ad in the newspaper, saying that Santa is looking to employ new elves. He explains to Pinky that they shall get jobs at the North Pole and get Santa's elves to make the Noodle Noggin dolls, and then Santa will distribute the dolls to everyone. Pinky is especially pleased by this plan, because it means he will be able to bring his letter to Santa in person.

Pinky and Brain get transportation by building a humanoid dummy, disguising it as someone who is trying to get to the North Pole, bringing along a cage with them in it. While on the private charter plane, Pinky continues working on his letter to Santa. However, when the pilot gets up to go to the back of the plane, Pinky and Brain's dummy is unable to take the wheel, and when the pilot tries to get the plane back on track, the mice and their dummy accidentally unlock the door and fall out. Pinky and Brain manage to parachute down using the dummy's now-loose head, and then continue onward using a sled and dog team.

Upon finally reaching Santa's workshop, Pinky and the Brain put on their elf costumes. They go inside for their job interview, conducted by an elf named Schotzie, who assigns them to work in the mail room. Once there, Brain adds a Noodle Noggin doll to everyone's wish lists. When Santa is given a spreadsheet listing what all the kids in the world want, he is curious as to what Noodle Noggin is and tells Schotzie to go look for the blueprints. Pinky, meanwhile, wants to process his own letter, but Brain tells him that there is no time for them to do that, since now they have to secretly place the Noodle Noggin blueprints in the design office. However, while trying to sneak there, Schotzie catches them in the act and then chases after them, during which he pulls off their fake elf ears and beards.

After catching them, Schotzie begins to interrogate Pinky and Brain when one of the other elves takes a look at the Noodle Noggin blueprints Brain was carrying. Although Schotzie suspects Pinky and Brain of being spies sent by another holiday spirit to steal the blueprints, Brain goes along with Schotzie's accusation and says that the elves should get started on making the dolls. He and Pinky then escape while Schotzie is not looking and hide in the elves' toy manufacturing plant, where they see that the elves have already begun working on the Noodle Noggin dolls.

After making it out of the toy manufacturing plant, Pinky and Brain see that Santa is getting ready to take off in his sleigh. Pinky still wants to bring his letter to Santa, but again Brain exasperatedly stops him from doing so. They disguise themselves as two of Santa's reindeer and fly alongside the actual reindeer until they fly over Acme Labs, at which point they detach themselves and crash-land through the roof, accidentally breaking Brain's hypnotic transmitting equipment. While Santa continues distributing the Noodle Noggin dolls all over the world, Brain frantically gets to work repairing his device. But as he is doing so, Pinky finds his letter to Santa in his backpack and realizes he never got the chance to give it to him. He cries about this to Brain, but his companion is still too occupied with getting his transmitter fixed to care much about his problem.

After he has finished fixing his hypnotic transmitter, Brain orders Pinky, who is still sobbing about having failed to give his letter to Santa, to activate the power switch when the meter hits the red level. While waiting for the meter to go up, Brain takes a look at Pinky's letter and reads it:

Upon reading these touching words, Brain is overwhelmed with remorse for his behavior towards his best pal; he breaks down in silent tears and, when the time comes to broadcast his hypnotic message, simply commands everyone in the world to have a merry Christmas, and afterwards destroys his broadcasting machine. Later that day, Pinky and the Brain exchange gifts; Brain gives Pinky a spellchecker, and Pinky gives Brain a key chain with a small globe attached to it.

The special was made available on VHS by Warner Home Video on August 13, 1996. The VHS release also included another episode from the show's first season, "That Smarts". The special was later included on the Pinky and the Brain: Volume 1 DVD set, released by Warner Home Video on July 25, 2006. It has also been made available on iTunes, Amazon Instant Video, and Google Play.

In September 1996, the episode won the Primetime Emmy Award for "Outstanding Animated Program (for Programming Less Than One Hour)". 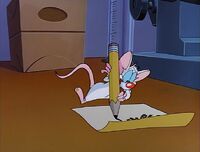 Pinky writing his letter to Santa. 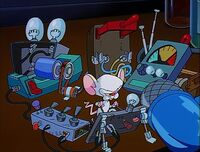 Brain working on his transmission equipment. 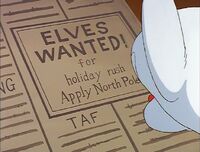 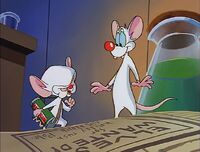 "Pinky, are you pondering what I'm pondering?"
"Well, I think so, Brain, but 'apply North Pole' to what?" 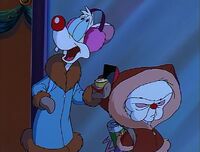 Pinky and the Brain set off for the North Pole. 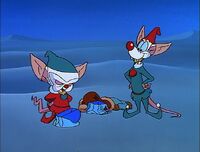 Once they make it there, they disguise themselves as elves... 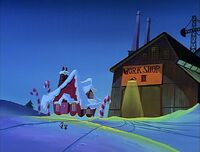 ...to apply for work at Santa's factory. 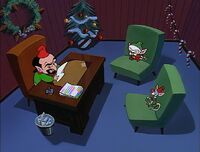 Schotzie the elf assigns them to the mailroom. 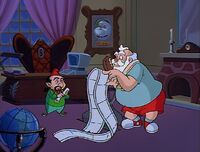 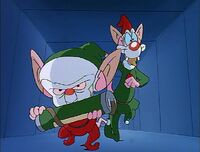 Pinky and the Brain try to sneak the blueprints into the design office... 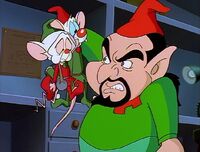 ...but Schotzie thinks they're stealing them. 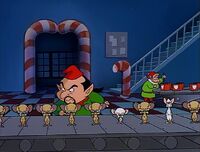 Pinky and the Brain escape by hiding in the assembly line. 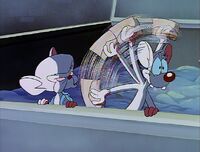 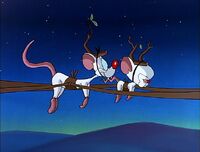 Pinky and the Brain disguise themselves as two of Santa's reindeer. 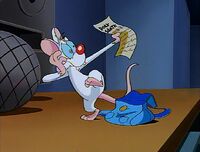 Upon returning to Acme Labs, Pinky finds he never gave his letter to Santa... 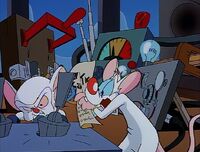 ...and tries to tell Brain about it. 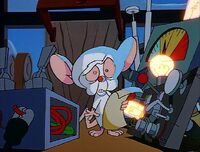 Before he can give his hypnotic transmissions, Brain reads Pinky's letter. 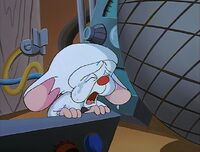 "I order you to... have a merry Christmas, everyone!" 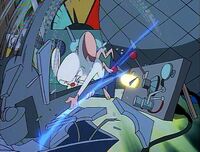 Brain then destroys his transmitter. 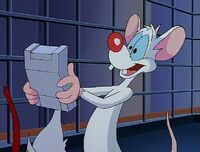 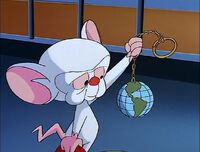 ...and Pinky gives him the world. 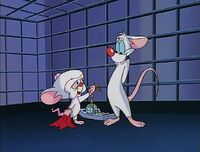 "Thank you, Pinky, and merry Christmas."