On Christmas Eve, Winnie the Pooh is having trouble setting up his Christmas tree. Pooh slips and falls, and breaks a shelf holding a present he made for Piglet. When Piglet suddenly arrives, Pooh desperately searches for a new hiding place for the present (since the broken shelf can no longer stay up) as more of his friends arrive, eventually putting it in an empty honey pot and then helping himself to a full pot of honey with satisfaction, in which he forgets to answer the door. They eventually open the door themselves per Roo's advice after wondering why Pooh won't let them in. Although surprised to see Pooh eating honey, they begin helping Pooh decorate his tree. After Tigger briefly annoys Rabbit with jingle bells, everyone (including Rabbit) joins in and sing a Winnie-the-Pooh version of "Jingle Bells".

That night, Roo wonders if Santa is coming. Rabbit tells Roo the story of how, on a previous Christmas Eve, their letter failed to reach Santa and Pooh dressed up as Santa to bring gifts to his friends. After Rabbit finishes the story, Pooh (who is once again dressed as Santa) arrives with a sack of gift for everyone.

The next day, it is Christmas Day and everyone heads outside to have fun. While playing in the snow, Tigger again annoys Rabbit with his jingle bells, forcing him to take them away. Tigger nevertheless lets Rabbit have them, who then discards them into a tree stump. Sometime later, Piglet gives Pooh some honey pots as a Christmas present. Remembering his own present, Pooh suddenly begins searching for it, but the search lasts until New Year's Eve. When Pooh hears Christopher Robin calling for him, he heads outside to find him. After finding Christopher Robin, he reveals that he is preparing a party to celebrate New Year's Eve, in which Pooh suggests having the party at Rabbit's house. Pooh then takes the box of decorations and heads off there.

At Rabbit's house, Rabbit and Piglet are tending to a potted carrot. While Rabbit goes to get the plant food, Pooh suddenly comes in, scaring Piglet into hiding with the carrot. While Pooh examines the honey in the Rabbit's cupboard, Rabbit returns and closes the cupboard, unknowingly pushing Pooh inside, but is shocked to find his carrot gone. A noise in the cupboard leads Rabbit to open it and finds Pooh inside eating honey, to his annoyance. After finding Piglet, another visitor knocks on the door, which turns out to be Tigger, followed by Eeyore emerging from the snow underneath them after Tigger bounces Rabbit. Tigger further annoys Rabbit after failing to catch a self-thrown snowball that lands in his house. When Pooh informs them of the party, an excited Tigger tries to decorate the place, but ends up making a mess, making Rabbit so angry that he throws everyone out, planning to move. Believing that their personalities are a threat to Rabbit, Pooh suggests doing a resolution (which Christopher Robin had told him about earlier), a promise which they must keep no matter what. Piglet starts behaving like Tigger, Tigger (who has a rock tied to his tail to keep him from bouncing) starts behaving like Piglet, Pooh starts behaving like Eeyore, and Eeyore starts behaving like Pooh (in which he is shown standing on two legs, eating honey, and wearing a red shirt that resembles Pooh's).

As Rabbit prepares to move, his four friends return with their changed personalities, which immediately makes him leave, but after falling down a cliff, he is sent flying with his carrot. His friends find him stuck in a tree with bees attempting to abduct him. The four then regain their old personalities and Tigger unties the rock from his tail and rescues Rabbit. Rabbit reconciles with his friends, convincing them to just be themselves while admitting that he's the one who needs to change just as Christopher Robin arrives. They then head back to Rabbit's house to prepare for the party.

Later at night and at the start of the new year, Rabbit returns the jingle bells he took from Tigger. Pooh finally remembers where he left Piglet's gift and goes home to get it. After returning with the honey pot containing the present, revealed to be a music box, he then gives it to Piglet. After singing a song to Piglet following the music, Piglet claims that Pooh is a greater gift and everyone sings "Auld Lang Syne" to celebrate the new year. 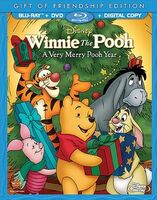 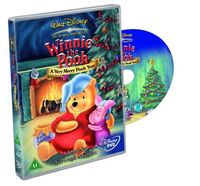 Retrieved from "https://christmas-specials.fandom.com/wiki/A_Very_Merry_Pooh_Year?oldid=157512"
Community content is available under CC-BY-SA unless otherwise noted.