"A Wayside Christmas" is the Christmas episode of the Nelvana animated television series Wayside, based on the Sideways Stories from Wayside School books by Louis Sachar.

When Myron does not give Bebe a Secret Santa gift, a series of haphazard events confuse Myron into thinking he's actually stuck in his own version of A Christmas Carol. The other kids, including Todd, Dana and Maurecia, are baffled as he mistakes them for Ghosts of Christmas Past, Present, and Future, and in the end, Myron learns his lesson. 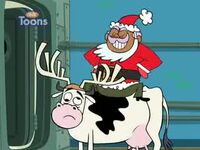 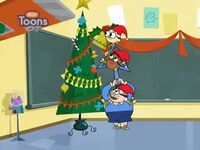 The Three Erics putting decorations on the Christmas tree 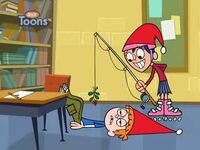 Maurecia holds a rod with mistletoe over Todd 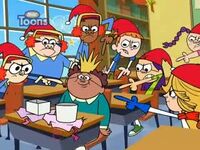 Everyone points at Myron
Add a photo to this gallery
Retrieved from "https://christmas-specials.fandom.com/wiki/A_Wayside_Christmas?oldid=136950"
Community content is available under CC-BY-SA unless otherwise noted.