Opus and Bill in A Wish For Wings That Work is an animated Christmas television special based on the book A Wish For Wings That Work: An Opus Christmas Story, which itself was based on the newspaper comic strips Bloom County and Outland by Berkeley Breathed. Originally aired on CBS on December 13, 1991, it was directed by Skip Jones and was produced by Steven Spielberg's Amblin Entertainment and Universal Cartoon Studios.

The story opens on Christmas Eve as Opus the Penguin is writing a letter to Santa Claus, recounting the events of the day. Earlier in the particular day, Opus is shown attempting to fly like the ducks in the sky, but as he is a penguin, he fails miserably at it, and as a result, he is downhearted about it. To make matters worse, he is mocked by a trio of ducks about his lack of flight.

After attending a meeting with his support group, Earthbound Birds Anonymous, Opus decides "to take the laws of physics into his own hands" and goes to a balloon shop, where he begins his attempt to become an "aeronautic vigilante." He puts on a girdle and, with help from his friend Bill the Cat, attaches balloons to it. But Bill's tongue gets stuck to the girdle Opus is wearing, causing his attempt at flight to go out of control and eventually have a crash landing. Opus is so upset at this that he chastises Bill for it, hurting the cat's feelings.

As the flashback wraps up, Opus finishes up his letter to Santa, asking that the big guy grant him his wish for "some penguin wings that work." He begins stuffing the letter into an envelope, but after checking the calendar and seeing how close it is to Christmas, he faxes the letter instead.

That night, as Opus is sleeping, we see Santa Claus and his reindeer flying over Bloom County. Unfortunately, as Santa circles the area, the coupling pin connecting his sleigh to the reindeer comes loose and falls out, sending Santa himself tumbling to the ground. Opus, meanwhile, wakes up (having just had a dream featuring himself unsuccessfully attempting to pilot the plane in the 1937 film Lost Horizon) and hears a loud knocking at his door. He answers it to find the ducks from earlier, saying they need his help.

The ducks bring Opus to their pond, where the penguin sees that Santa Claus and his sleigh has landed in the middle of the pond. The ducks explain that they'd go save the big guy themselves, but the water is too cold, and Opus, being a penguin, is much more accustomed to swimming in cold water. Opus manages to swim across the pond and pull Santa's sleigh back to shore, during which a frog leaps away with Opus's pilot helmet. As a token of gratitude, Santa gives his hat to Opus (to replace his lost pilot helmet), much to the amazement of the ducks and Bill, and tells him that it was his courage that made "his [wings] fly beyond all others" before leaving.

The next morning, Opus wakes up, still feeling let down over his lack of flight. But to his amazement, all the ducks in Bloom County (now wearing bow ties just like his) have come to thank Opus for his daring rescue by taking him flying through the air. An overjoyed Opus asks them who suggested the idea, and one of the ducks points downward to Bill, who is waving at them from the ground. Opus thanks Bill for this by giving him Santa's hat. After the credits, we see Truffles yelling up at Opus "Don't get cocky up there!" before Opus' prosthetic buttocks falls on him.

MCA Universall Home Video made the special available on VHS and Laserdisc in 1993. It was later released on DVD by Universal Home Entertainment on November 6, 2007. The DVD was reissued on October 10, 2010, this time packaged with a bonus holiday-themed music CD. It was later featured in a Double Feature DVD with The Life and Adventures of Santa Claus in 2013.

Lisa Horowitz of Variety gave the special a positive review, saying that it "crams a lot of action and intelligence into its half-hour". She also praised the animation and vocal performances.

Breathed, who was credited as the writer and executive producer of the special, was disappointed with the overall results. His displeasure with the special was shown in a 2003 Washington Post interview where someone asked where a copy of the special can be found on VHS or DVD; Breathed's response was, "Hopefully in the rubbish pail. We can do better than that and we will with an eventual Opus film." In a later 2007 interview, Breathed claims that the reason he dislikes the special was simply "unspectacular ratings" and his humor "wasn't meant for television, even if it was done right." Another reason was his "lack of writing experience" and the director was way over his head. Breathed also stated that he wanted Sterling Holloway to provide the voice for Opus. 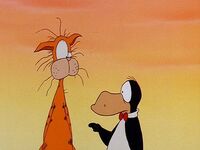 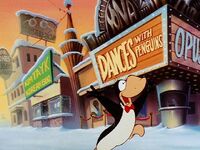 Opus dreams that he's operating the plane in Lost Horizon. 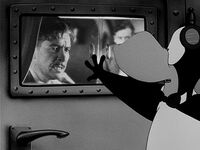 Retrieved from "https://christmas-specials.fandom.com/wiki/A_Wish_For_Wings_That_Work?oldid=175297"
Community content is available under CC-BY-SA unless otherwise noted.