Alias St. Nick is a 1935 Happy Harmonies animated short produced by Harman-Ising Productions and released by Metro-Goldwyn-Mayer. This was the first appearance of Little Cheeser.

It's Christmas Eve, and Mrs. Mouse is reading A Visit from St. Nicholas to her brood, but Little Cheeser is having none of it- he doesn't believe in Santa Claus! Meanwhile, outside, a vagabond cat battles a fearsome blizzard. The cat overhears them arguing about the existence of Santa Claus, so, seeking shelter, he dresses up as St. Nick in order to get himself a Christmas dinner of mice. Little Cheeser is bored, as he doesn't believe in Santa. Against his mother's will, he strikes out on his own. He is influenced by the Devil himself to go wrong. The naïve Mrs. Mouse lets in the fake Santa, but fortunately, Little Cheeser doubts that the cat is really Santa. Little Cheeser and the "wolf in Santa's clothing" have an exciting time on Christmas Eve. After Little Cheeser gets into trouble, he goes running home to mother. He soon unmasks the nefarious imposter, and he assaults the stray feline with toy tanks and steam shovels.

This short is made first available to the public in the VHS of MGM Cartoon Magic, released in September 1989, as part of the third phase of the Cartoon MovieStars collection, by MGM/UA Home Video in a partnership with Turner Entertainment. Or also made available on the Sylvia Scarlett disc of the Warner 100th Anniversary Collection - Katharine Hepburn DVD set. 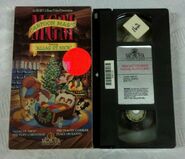 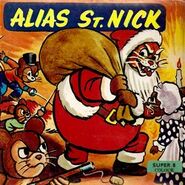 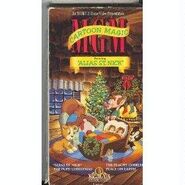 Retrieved from "https://christmas-specials.fandom.com/wiki/Alias_St._Nick?oldid=148275"
Community content is available under CC-BY-SA unless otherwise noted.