"An 'Even Steven' Holiday Special" is the holiday episode of the Nickelodeon animated series As Told By Ginger, originally broadcast on December 10, 2001. It is the sixteenth episode produced for the show's first season.

Ginger discovers that she's one-quarter Jewish. She decides to celebrate with a Hanukkah party and turns her back on Dodie's Christmas party, which upsets Dodie. She then decides to throw a party as an "even steven" holiday party. Meanwhile, Hoodsey finds out that the reason Carl doesn't believe in Santa Claus is because he used to wish that his father would come home for Christmas, and he never did. Hoodsey tells a street corner Santa, who is really Jonas, about this and Jonas decides to pay his family a visit. 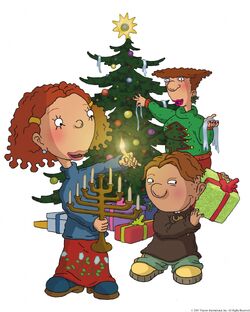 Retrieved from "https://christmas-specials.fandom.com/wiki/An_%22Even_Steven%22_Holiday_Special?oldid=165463"
Community content is available under CC-BY-SA unless otherwise noted.