"Arnold's Christmas" is a special half-hour Christmas episode of the Nickelodeon animated series Hey Arnold!, produced as the twentieth episode of the show's first season (though it ended up airing as the eighteenth) and premiered on December 11, 1996. It continued to air annually on Nickelodeon and later also on the NickToons network through 2007, and was later aired on TeenNick's late-night retro-themed programming blocks from 2011 to 2021. Craig Bartlett, the show's creator, and Francesca Marie Smith, who voiced Helga Pataki, have both stated it to be one of their personal favorite episodes of the show.

The episode begins right as Christmas vacation has started for the students of P.S. 118. While on a walk with her best friend, Phoebe, Helga talks about how she thinks Christmas is all about presents and then notices a display case showing off what she wants the most - Nancy Spumoni snow boots. Rhonda points out to her that she'd have a hard time receiving them, as the stores are pretty much sold out, but she is certain that she will be receiving them because she has been dropping hints about it to her parents, Big Bob and Miriam, for weeks. Shortly afterward, she notices Arnold walking by and soliloquizes about how she secretly loves him and wants to find the perfect gift for him.

Meanwhile, at the Sunset Arms Boarding House, Arnold and the boarders assign each other a Secret Santa. In his case, he has to get a gift for Mr. Hyunh. He notices that Mr. Hyunh always seems very sad around Christmas. When he tells his best friend, Gerald, about it, Gerald suggests he ask Mr. Hyunh about it so he can find out what would be a good gift for him. Arnold goes to talk to Mr. Hyunh to find out what he wants while trying to avoid revealing himself as his Secret Santa. Mr. Hyunh tells Arnold that this time of year always reminds him of his lost daughter, Mai. Twenty years ago, Mr. Hyunh explains, he lived happily with Mai in a small village in South Vietnam, but he was aware they would have to leave for a better life due to the Vietnam War growing closer to his village. However, when they tried to evacuate, the American rescue soldiers only had room for one more passenger on their helicopter, and Mr. Hyunh gave Mai to the rescue soldiers to keep her safe. After twenty years, he came to the city to reunited with her, but he has never been able to find her.

Christmas Eve comes, and Arnold decides to search the city for Mai, since reuniting her with Mr. Hyunh would be the perfect gift for him. Accompanied by Gerald, he goes to the Federal Office of Information to find out where to find her. They talk about it to the supervisor, Mr. Bailey, who initially refuses their request. He then gets a phone call from his wife and he mentions that he hasn't been able to do his Christmas shopping. Arnold and Gerald work out a deal with him; they do his shopping for him, and he will try to find Mai.

Arnold and Gerald manage to buy almost all of the items on Mr. Bailey's shopping list, with the last one being a pair of Nancy Spumoni snow boots for his daughter. While looking for them, they run into Helga, who, unbeknownst to them, is still trying to find the perfect gift for Arnold. During their conversation, Arnold accidentally drops the shopping list; Helga picks it up and notices the snow boots are on it, so she starts following them around. Arnold and Gerald, unfortunately, are not able to find a single pair in any of the stores. Without them, Mr. Bailey refuses to find Mai. Arnold mopes about the fact that he couldn't reunite Mr. Hyunh with her, unaware of Helga eavesdropping on him and finding out why he was searching for the snow boots.

Helga goes home, where her family is already celebrating Christmas. To her surprise, Miriam presents her with a pair of the snow boots. She goes outside to try them out, but then remembers that Arnold was desperate to find them for Mr. Bailey. After some moral agonizing over this, she brings them to him just as he's closing up his office, and gets him to search the records though an impassioned speech on Arnold needing a Christmas miracle.

On Christmas morning, Arnold is still downtrodden over the fact that he could not reunite Mai with Mr. Hyunh, who is understanding, but depressed. At that point, the doorbell rings and Phil goes to answer it. To Arnold and Mr. Hyunh's astonishment, he returns with Mai. As she and Mr. Hyunh are reunited, Arnold is puzzled as to how this miracle happened, and Gerald suggests that maybe he has some sort of Christmas angel looking out for him. After Arnold ponders at this, outside the boarding house, we see Helga wishing Arnold a merry Christmas.

The special was made available on VHS by Paramount Home Video on October 13, 1997. The tape also included another episode from the show's first season, "Snow", as a bonus cartoon.

The special made its DVD debut on the Hey Arnold!: Season 1 manufacture-on-demand DVD set released by Amazon.com on August 21, 2008. It appeared again on the retail version, released by Shout! Factory on August 9, 2011, and later repackaged as part of their Hey Arnold!: The Complete Series set in 2014. It was also included, along with "Arnold's Thanksgiving" from the show's third season, on Shout! Factory's Out of the Vault Christmas compilation DVD, which was originally released as a Walmart exclusive on October 6, 2015.

Following the show's video rights returning to Paramount in 2018, the special was again included on Paramount's Hey Arnold!: The Ultimate Collection box set (which was essentially a rerelease of Shout! Factory's Complete Series set, but with the addition of the two Hey Arnold! movies and new bonus features), released on November 20, 2018.

Note: Iggy, Sheena, Nadine, and Ruth McDougal appear, but do not have speaking parts. 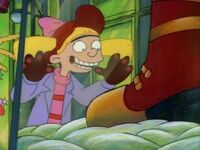 Helga looking at the Nancy Spumoni snow boots on display 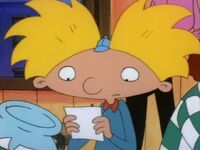 Arnold sees he has to find a gift for Mr. Hyunh... 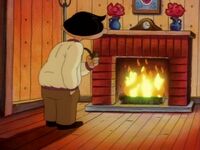 ...who is always sad at Christmas. 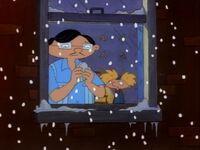 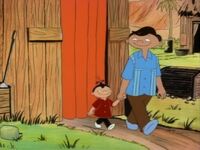 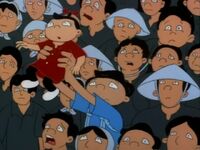 ...and how he had to give her to American rescue troops to keep her safe during the Vietnam War. 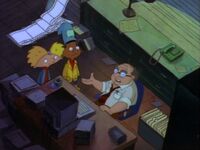 Arnold and Gerald try to get Mr. Bailey to help them find Mai. 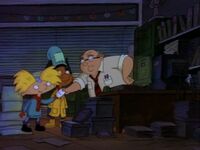 He agrees to do so if they can buy all the items on his shopping list. 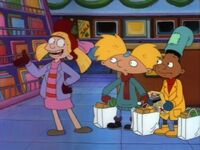 While shopping for them, Arnold and Gerald bump into Helga. 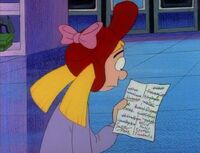 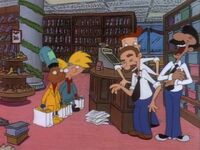 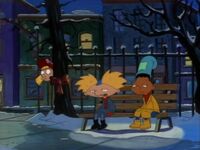 Helga finds out why Arnold needs them. 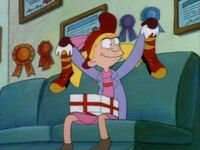 Helga receives a pair of the snow boots... 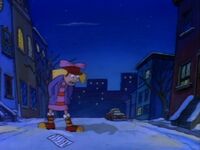 ...but then realizes that Arnold's happiness is more important. 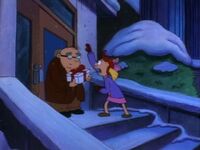 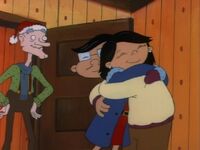 The next morning, Mai happily reunites with Mr. Hyunh. 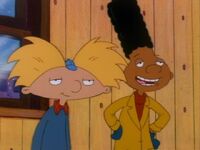 "I guess miracles can happen after all." 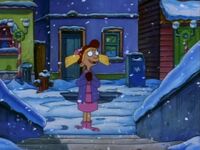 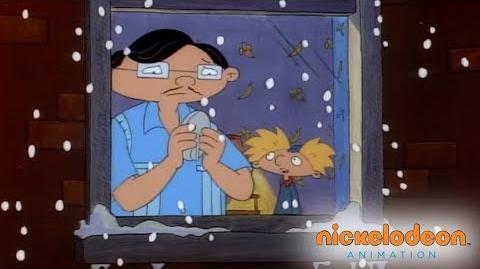