Rudolph the Red-Nosed Reindeer: The Movie

Arrow is first seen as a yearling buck in Mrs. Prancer's class along with Rudolph and Zoey (who is Arrow's doefriend) telling the class that his father Cupid told him that he was born to be a Flyer (nickname for Santa Claus's reindeer) just like him. When Rudolph expresses his wish to be a Flyer, Arrow tells him "Not with that nose" before he and the rest of the class (except Zoey and Mrs. Prancer) laugh at him causing Rudolph to leave the school.

Arrow is later seen on Christmas Eve with his mother watching his father, uncles, and the other Flyers guiding Santa's sleigh into the night, before catching Rudolph and Zoey together under the mistletoe. Zoey tells him that she and Rudolph were just talking though Arrow says it looked more like kissing to him. Zoey then tells him not to get jealous and that she and Rudolph are just friends. Arrow denies being jealous of Rudolph before having Zoey leave with him and calls Rudolph a loser as he leaves.

Years later, a teenage Arrow is preparing to take part in the Junior Reindeer Games (where the winner is sometimes picked by Santa to be a flyer) with Zoey and Rudolph. At the start line for the Sleigh Race, Arrow notices Rudolph wearing Zoey's pendant (which she gave to him for good luck) and reminds him that she is "his doe" to which Rudolph replies by saying that Zoey is not a trophy and shouldn't be treated like one.

During the race, Arrow, determined to be chosen to be a Flyer, starts cheating by knocking the other competitors off track. When he is neck-neck with Rudolph he tries to distract him by saying that Zoey is only nice to him because she feels sorry for him, but Rudolph doesn't believe him but Arrow says Zoey told him so. Angry at these taunts, Rudolph's nose lights up which blinds Arrow causing him to crash. Rudolph comes first in the race but is disqualified because his nose lighting up and causing the crash is considered cheating and Arrow is made winner by default and is joined by his father Cupid and his uncle Comet.

Angry at this, Zoey confronts Arrow for cheating but he replies that the point is he won and Santa is going to notice him. Zoey tells him that he's no Flyer and that Flyers are brave and they have character and true hearts like Rudolph, but Arrow points out that Rudolph has a red nose (which in his opinion makes Rudolph unworthy to be a Flyer). Angry at Arrow's attitude, Zoey calls him shallow and says that she doesn't want to be his doefriend (reindeer name for girlfriend) anymore to which a dismayed Arrow turns his back on her, perhaps angry that Zoey took Rudolph's side instead of his.

He appears briefly in a nightmare Rudolph has after running away from home.

He is last seen briefly near the end of the film where he is seen singing along with Zoey, her mother and father and the other villagers after Rudolph returns with Santa and the Flyers after helping them get through Stormella's storm by using his nose to light the way. This shows that Arrow has ended his rivalry with his cousin and now respects him. 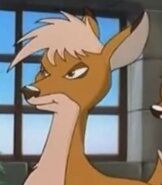 Arrow in Mrs. Prancer's class with Rudolph and Zoey

Arrow and his mother watching Santa and the Flyers take off.

Arrow catching Rudolph and Zoey together.

Arrow being confronted by Zoey for cheating in the Sleigh Race.

Arrow with his father Cupid, his uncle Comet, and Zoey 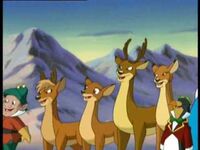 Add a photo to this gallery
Retrieved from "https://christmas-specials.fandom.com/wiki/Arrow?oldid=186386"
Community content is available under CC-BY-SA unless otherwise noted.