Arthur Christmas is a British/American 3-D computer animated fantasy comedy film produced by Aardman Animations and Sony Pictures Animation, and distributed by Columbia Pictures. It was released in the United Kingdom on November 11, 2011, and then in the USA on November 23rd of the same year. The film was directed by Sarah Smith and features the voices of James McAvoy, Hugh Laurie, Jim Broadbent, Bill Nighy, Imelda Staunton, Ashley Jensen, and Michael Palin. The film was nominated for the 2011 Annie Award for Best Animated Feature; however, it lost to Rango.

Set on Christmas Eve, the film opens with hundreds of elves helming the command centre of Santa Claus's mile-wide, ultra-high-tech sleigh, the S-1. The current Santa Malcolm and the elves deliver presents to every child in the world using advanced equipment and military precision. These complex operations are micromanaged by Malcolm's oldest son Steve and his obsequious elfin assistant Peter (amongst thousands of more elves) at mission control underneath the North Pole, while Steve's clumsy and panophobic younger brother Arthur answers the letters to Santa. During a delivery operation, when a child wakes up and almost sees Malcolm, an elf back in the S-1 inadvertently presses a button, causing a present to fall off a conveyor and go unnoticed.

Having completed his 70th mission, Malcolm is portrayed as far past his prime and whose role in field operations now is largely symbolic. Nonetheless, he is held in high esteem, and delivers a congratulatory speech to the enraptured elves. Much to Steve's frustration, who has long anticipated succeeding his father, Malcolm announces he looks forward to his 71st. During their family Christmas dinner, Arthur's suggestion for the family to play a board game degenerates into a petty quarrel between Malcolm and Steve, while Grandsanta, bored by retirement, resentfully criticises their over-modernisation. Distraught, the various family members leave the dinner table. When Arthur humbly compliments Steve that he believes he will be a great Santa Claus, Steve sarcastically dismisses Arthur's overture; later, their father shares with his wife Margaret his grave doubts about his self-identity should he retire.

Meanwhile, an elf named Bryony Shelfley finds the missed present—a wrapped bicycle that has yet to be delivered—and alerts Steve and his elf-assistant to the problem. Arthur is alarmed when he recognises the present as a gift for Gwen Hines, a little girl to whom he had personally replied. Arthur alerts his father, who is at a loss as to how to handle the situation; Steve argues that one missed present out of billions is an acceptable error whose correction can wait a few days. Grandsanta, on the other hand, proposes delivering the gift using Evie, his old wooden sleigh, and the descendants of the original eight reindeer, forcefully whisking away a reluctant Arthur, a stowaway Bryony and his pet reindeer. They get lost, lose reindeer, and land in danger several times, ultimately being mistaken for aliens and causing an international military incident. Through all this, Arthur eventually learns to his compounding disappointment that Grandsanta's true motive is to fulfil his ego, that Steve refuses to help them out of petty resentment, and that his own father has gone to bed, apparently content.

Finally, stranded in Cuba after losing the sleigh, Arthur renews his sense of purpose—that it all comes down to preventing a child's disappointment—and with Grandsanta's help manages to recover the sleigh. Meanwhile, the elves grow increasingly alarmed at rumours of this neglected delivery and the Clauses' unthinkable indifference, sending them into a panic. In response, Malcolm, Margaret, and Steve take the high-tech sleigh to deliver a superior present—to the wrong child. Malcolm's navigation error and Steve's mishandling of the mistaken identity throw into sharp relief their intentions against those of Arthur.

After much difficulty, and ultimately with Margaret and Bryony's help, all the male Clauses arrive at Gwen's house before she awakens, only to have all but Arthur quarrel about who gets to actually place the gift. Noticing that only Arthur truly cares about the girl's feelings, the elder Clauses collectively realise that he is the sole worthy successor. As a result, Malcolm gives Arthur the honour and Steve forfeits his birthright to his brother. In a fitting conclusion, Gwen glimpses a snow-bearded Arthur in a wind-buffeted sweater just before vanishing into the night.

With the crisis resolved, Malcolm goes into a happy retirement with Margaret; he also becomes Grandsanta's much-desired new companion. Meanwhile, Steve finds true contentment as Chief Operating Officer while Bryony is promoted to Vice-President of Packing. In a nod to traditionalism once neglected, the high-tech S-1 is re-christened EVIE and refitted to be pulled by a 5000-reindeer team—led by the original eight reindeer, all of whom managed to return safely via innate homing abilities. Finally, Arthur happily guides the entire enterprise in the proper spirit as the new Santa. 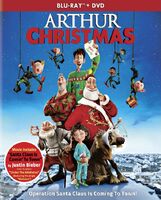 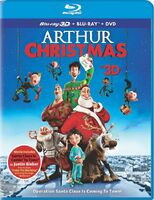 Retrieved from "https://christmas-specials.fandom.com/wiki/Arthur_Christmas?oldid=146283"
Community content is available under CC-BY-SA unless otherwise noted.