Babes in Toyland is a 1961 Christmas musical film directed by Jack Donohue, produced by Walt Disney, and distributed to theaters by Buena Vista Distribution, based on Victor Herbert's popular 1903 operetta of the same name. There had been a well-remembered film version in 1934 with Laurel and Hardy, and three television versions prior to this one, but it was only the second film version released to movie theaters, the first in Technicolor, and the most elaborate by far. However, the plot, and in some cases, the music, bear little resemblance to the operetta (Disney had most of the lyrics rewritten and some of the song tempos drastically changed). Both the 1934 film and the 1960 television version (with an adult Shirley Temple) use the songs as originally written for the stage.

The film begins as if it were a stage play presented by Mother Goose (and her wise-cracking, talking goose companion, Sylvester J. Goose), about two nursery rhyme characters, Mary Contrary and Tom Piper, who are about to be married. At the same time, Barnaby Barnicle, a miser, is hiring his two henchman, Gonzorgo and Roderigo, to throw Tom into the sea, forcing Mary to marry him instead. After smashing Tom on the head with a hammer and tying him in a bag, Gonzorgo and Roderigo pass by a gypsy camp. They decide to sell him to the gypsies instead of drowning him in order to collect a double payment.

Gonzorgo and Roderigo return and tell Mary, Barnaby, and the citizens of Mother Goose Land that Tom has accidentally drowned. They show Mary a phony letter in which he tells her that he is abandoning her for her own good and that she would be better off marrying Barnaby. The grief-stricken Mary is still able to earn a living off her sheep to avoid marrying him, but Barnaby, knowing this would happen, also has told Gonzorgo and Roderigo to steal her sheep. She, believing she is destitute, reluctantly accepts the proposal from Barnaby. He unknowingly arranges for the same gypsies that have Tom to provide entertainment for the marriage. Tom, disguised in drag as the gypsy Floretta, reveals himself and Barnaby pursues the frightened Gonzorgo and Roderigo, furious at their deception. One of the children informs Mary of some sheep tracks leading into the Forest of No Return.

The children, still eager to find the sheep, sneak away into the forest to search for them. The trees of the forest come to life and capture them. Tom and Mary follow and find them in the forest telling stories about the live trees, which, at the moment, seem like ordinary ones. They camp out for the night, and in the morning the trees once again come to life and inform everyone that they are now in custody of the Toymaker in Toyland. Excited by this, they happily continue on, escorted part of the way by the trees.

Through the windows of the Toymaker's house they watch his rather incompetent apprentice, Grumio, present a new machine that makes toys without any manual labor. Overjoyed, he speeds it up to such a high rate that it explodes, destroying every toy in the factory. The group comes in and offers to help make more toys in time for Christmas. Grumio also presents another invention, one that shrinks things down to toy size, and if it were used on anything more than once, they would disappear completely. Barnaby, who had been spying on everyone, shrinks the Toymaker and Tom. When Gonzorgo Rodrigo see him threatening to give Tom two servings of the shrinking formula, they abandon him and run. They, too, are shrunken to toy size and locked up with Tom in a birdcage. Barnaby awakens Mary and starts a marriage ceremony threatening to destroy Tom if she resists, and to destroy the Toymaker if he refuses to marry them. While he delays the marriage, Tom sneaks away with the help of Gonzorgo and Roderigo, and returns with an army of toy soldiers to fight Barnaby. He easily demolishes them, and is about to obliterate Tom with another dose from the shrink gun, but Mary destroys it with a toy cannon. The formula splatters all over Barnaby, and shrinks him. He is challenged to and engages in a sword duel with Tom which he loses, but in the film as released, it is unclear whether or not he is actually killed, although he does appear to have been stabbed. After the fight is over, Grumio once again presents a new invention, this time returning people to their original size. It is promptly used on Tom, the Toymaker, Gonzorgo, and Roderigo, but not on Barnaby. Tom and Mary are married and live happily ever after. 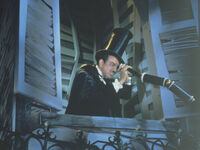 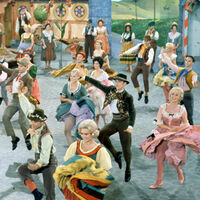 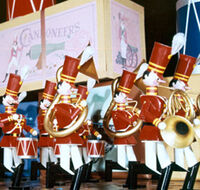