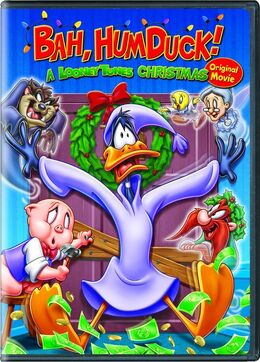 The Scrooge character of this special, Daffy Duck, is the owner of the most successful stores in town, the Lucky Duck Megastore. Because of the unfair prices, he has become fabulously wealthy over time. However, he has also become hard-hearted, as he berates everyone who works for him, including Porky Pig, who works as his assistant (and later, his assistant-assistant) manager.

As the story progresses, Daffy is visited by the ghost of the greedy Sylvester, who was run over by a forklift (nine times) last Christmas season. Sylvester warns Daffy to change his ways or Daffy will end up like him before too long. He also prophesies that three more ghosts will visit Daffy later in the night to show him the error of his miserly ways

After the work day is over, Daffy distinctly indicates that he plans to re-open the store at 5am on Christmas Day and force his employees to work until midnight. Meanwhile, Daffy and Bugs Bunny (who makes several cameos and coins the phrase "Bah, Humduck!" for Daffy to use throughout the movie) are trapped in the building because they have been suddenly snowbound.

Daffy locks himself inside his safe of money and seals it shut, but the Ghosts of Christmas Past (played by Granny and Tweety) come to visit him anyway. They take him to the Lucky Duck Orphanage, where Daffy remembered that, when he was young, no one would adopt him, and as he grew up, he became distrustful of everyone.

The second visit from the Ghost of Christmas Present (Yosemite Sam) is meant to show Daffy just how important family is around the holidays, as this ghost shows that Porky Pig's daughter, Priscilla, cares for Daffy and shows it sincerely when she wishes on a star that Daffy would find it in his heart to give her father Christmas Day off.

The final visit from the Ghost of Christmas Future (the Tasmanian Devil) allows Daffy to see the most possible future if the miser refuses to change his ways. The Lucky Duck has been shut down, and Daffy is gone, but easily forgotten by all, except for Priscilla Pig. On this note, Daffy realizes what his miserly ways will bring him—absolutely nothing.

When the Lucky Duck employees arrive at the store to start their work day, Daffy appears in a Santa suit and offers all his employees what they have been longing for. Marvin the Martian is given a space rocket to fly home to Mars for the holidays, Wile E. Coyote is given his own personal chef, and in the end, Priscilla Pig is given the Pretty Pudgy Princess doll she has always wanted, and in return, Priscilla invites Daffy to spend Christmas with her and her father—and even takes it a step further by calling him "Uncle Daffy", all while the Ghosts of Christmas congratulate Daffy for turning himself around. The cartoon culminates and concludes with Porky Pig attempting to say his favorite end line, but Priscilla picks up where he stutters and says, "That's All Folks!" then they both laugh about it.

At the same time the video was released, Immergent Records also released a soundtrack album, featuring the film's score, composed, arranged and performed by Gordon Goodwin's Big Phat Band (produced by Goodwin and Dan Savant). The track listing was as follows:

Note: Wile E. Coyote appears, but as per usual does not have a speaking part.

Retrieved from "https://christmas-specials.fandom.com/wiki/Bah,_Humduck!_A_Looney_Tunes_Christmas?oldid=157153"
Community content is available under CC-BY-SA unless otherwise noted.