Batman Returns is a 1992 feature film directed and produced by Tim Burton, and the first sequel to the 1989 film Batman, starring Michael Keaton reprising his role as the titular superhero. Christmas is involved in several major plot points in the film, such as the lighting of the Christmas Tree, the Penguin's challenge, and the significance of mistletoe in Batman and Catwoman's relationship. It won the 1993 Saturn Award for Best Make-Up.

The film opens on the mansion of the wealthy Cobblepots during Christmastime. Esther Cobblepot gives birth to a deformed child. They regarded him as a monster, and locked the child in a cage until finally, on Christmas Eve, they took him to a park and threw the his bassinet into the river to be swept away and flushed down into the sewers. The sewer exit finally leads underneath the Gotham Zoo's penguin exhibit, where he is found by a flock of penguins.

33 years later, it is revealed that the child was raised by the penguins and lived in the sewer, and was now existing as a sort of crypid beast to the inhabitants of Gotham City. As the Mayor and his assistants light the Christmas tree in Gotham Square, businessman Max Shreck proposes his ideas for a new power plant to his board of directors, while verbally abusing his clumsy secretary, Selina Kyle. He goes down to join in the tree lighting ceremony, only for the Penguin to send in a crime syndicate known as the Red Triangle Circus gang to cause anarchy. Batman is summoned, and Bruce Wayne suits up and rides out.

Batman arrives and fights off the gang. However, Shreck is whisked to the sewer, where he meets the Penguin and the Red Triangle Circus Gang. The Penguin requests that Shreck help reintroduce him into society. He refuses at first, but the Penguin blackmails him with knowledge of his criminal actions.

Shreck returns to his office to find Selina Kyle discovering the secret to his proposed power plant: that it will suck energy away from the city instead of providing it, raising costs and putting the city under Shreck's control. Shreck pushes Selina out of a window to kill and silence her. She survives, but finally snaps. She returns to her apartment and destroys the remains of her past self, swearing justice and revenge on Shreck by becoming the violent criminal vigilante Catwoman.

The Penguin finally makes his presence known by "saving" the Mayor's baby in a staged kidnapping attempt, and requests access to the Hall of Records to find out who his birth parents are. However, Bruce Wayne suspects that the Penguin is up to no good. He also meets Selina, and they feel an immediate attraction to each other.

Shreck convinces the Penguin to use his gang to wreck havoc across the city, discrediting the Mayor and running for mayor himself. Penguin agrees, but all of his gang's violence is put to an end by Batman's intervention. During one attempt, the Penguin finally comes face-to-face with Batman, and the two realize that the other is bigger threat than previously thought. During this time, Catwoman attacks and destroys one of Shreck's department stores, causing Batman to go after her. They fight, with Batman noting the mistletoe hanging above them. He says that mistletoe can be deadly if eaten, to which Catwoman responds that a kiss can be deadlier. They finish the fight and Catwoman loses, though she gets away.

Catwoman, knowing of Penguin's criminal actions and wanting revenge on Batman, suggests they team up to defame and discredit Batman so that the Mayor will not be able to rely on him anymore. The Penguin challenges the Mayor to relight the Christmas tree, but kidnaps the "Ice Princess" who was set to flip the switch. As Batman searches for her, the Penguin kills her and frames Batman for it. Meanwhile, the Circus Gang hack into the Batmobile, putting it under the Penguin's control. As Batman flees from the scene of the crime, the Penguin forces his Batmobile to wreck havoc across the city. Batman fixes the issue and escapes, recording some of Penguin's taunts about the people of Gotham. However, the Penguin meets with Catwoman and romantically advances on her. When she denies him, he betrays and tries to kill her, though both escape.

The next day, Batman sabotages one of Penguin's mayoral campaign speeches by playing the villain's incriminating thoughts on the cityfolk over the loudspeakers. With his public image now destroyed, the Penguin fires on the citizens and flees to his lair in the sewers. He then instructs his gang to engage in their new mission that he planned from the beginning: kidnap all the first born male sons of Gotham and bring them back to the sewer for him to kill, exacting his revenge for his abandonment as a child.

At one of Shreck's Christmas balls, Bruce and Selina end up under mistletoe. Selina notes that it can be deadly if eaten, and Bruce responds that a kiss can be deadlier. Realizing each other's secret identities, they attempt to leave, but the Penguin arrives to kidnap Shreck's son. Shreck offers himself in his son's place, and the Penguin agrees and takes him instead.

Bruce changes to Batman and stops all of the Circus Gang's kidnappings. Enraged, the Penguin attempts one last attack, where weaponized penguins will attack Gotham with missiles and destroy the city. Batman manages to reach the sewers and jam the signal controlling the penguins, causing them to turn back. Batman confronts the Penguin, and the ensuing fight throws the Penguin into the sewer's toxic water. Shreck is confronted by Catwoman, who intends to kill him. Batman tries to talk her out of it, but she denies him and electrocutes both herself and Shreck with a live wire and a taser. Batman finds Shreck's remains, but is unable to find Selina's. The Penguin tries to kill Batman again, but succumbs to his injuries and the toxic water and dies.

Following the fight, Bruce is driven home by his butler, Alfred Pennyworth, when he thinks he sees Catwoman's silhouette. However, he only finds her cat, whom he adopts. Alfred wishes his master a Merry Christmas right before the Bat-Signal flashes in the sky, and a still-alive Catwoman looks on.

After the success of Batman, Warner Bros. was hoping for a sequel to start filming in May 1990 at Pinewood Studios, and spent $250,000 storing the sets from the first film. Tim Burton originally did not want to direct another Batman film, saying "I will return if the sequel offers something new and exciting. Otherwise it's a most-dumbfounded idea." Burton decided to direct Edward Scissorhands for 20th Century Fox. Meanwhile, Sam Hamm delivered the first two drafts of the script, while Bob Kane was brought back as a creative consultant. Hamm's script had the Penguin and Catwoman going after hidden treasure.

Burton was impressed with Daniel Waters' work on Heathers; Burton originally brought Waters aboard on a sequel to Beetlejuice. Warner Bros. then granted Burton a large amount of creative control. Denise Di Novi and Burton became the film's producers. The first film's producers Jon Peters and Peter Guber became executive producers, joining Benjamin Melniker and Michael E. Uslan. Dissatisfied with the Hamm script, Burton commissioned a rewrite from Waters. Waters "came up with a social satire that had an evil mogul backing a bid for the Mayor's office by the Penguin", Waters reported. "I wanted to show that the true villains of our world don't necessarily wear costumes." The subplot of the Penguin running for Mayor came from the 1960s Batman TV series episodes "Hizzoner the Penguin" and "Dizzoner the Penguin". Waters wrote a total of five drafts.

On the characterization of Catwoman, Waters explained "Sam Hamm went back to the way comic books in general treat women, like fetishy sexual fantasy. I wanted to start off just at the lowest point in society, a very beaten down secretary." Harvey Dent appeared in early drafts of the script, but was deleted; his becoming Two-Face would have appeared in the climax when Catwoman kisses him with a taser to the face, which was replaced with Max Shreck. Waters quoted, "Sam Hamm definitely planned that. I flirted with it, having Harvey start to come back and have one scene of him where he flips a coin and it's the good side of the coin, deciding not to do anything, so you had to wait for the next movie." In early scripts Max Shreck was the "golden boy" of the Cobblepot family, while the Penguin was the deformed outsider, and Shreck would be revealed as the Penguin's long-lost brother. Shreck was named after actor Max Schreck, known for his role as Count Orlok in Nosferatu. 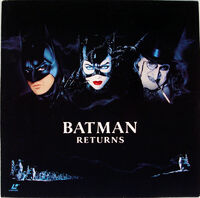 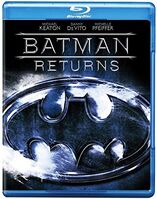 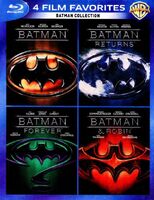 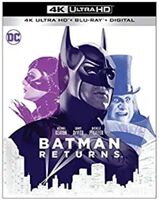 Warner Bros. Records
The film's soundtrack contained two discs and a total of 17 tracks consisting of the original score composed by Danny Elfman, who won the 1993 BMI Film Music Award, and songs used in promotional material for the film.