Beauty and the Beast: The Enchanted Christmas

Beauty and the Beast: The Enchanted Christmas (originally titled Beauty and the Beast: A Christmas Belle) is a direct-to-video movie produced by Walt Disney Television Animation. It is a sequel to the 1991 Disney animated movie Beauty and the Beast, though the main story is actually an extended flashback set during the original film's events (with the framing device taking place after the film's ending). It won two 1998 WAC Awards for Best Direct-to-Video Production and for Best Director (awarded to Andrew Knight), and was dedicated to the memory of Mike Burgess, one of the character designers/storyboard artists.

The film is told in flashback by the servants as Belle and the Prince hold a Christmas party some time after the lifting of the spell. In the recollection, Belle is still a prisoner in the Beast's castle but is now on friendlier terms with the Beast since he saved her from the wolves. The servants are trying to figure out a way for them to fall in love, and with Christmas coming up, they look at this as a great opportunity to bring them together. Belle is excited for Christmas, but the Beast is not happy seeing how it is the anniversary of when the Enchantress punished him with her spell years before.

Meanwhile, in an unknown part of the castle (through a secret door in the West Wing), an enormous pipe organ is playing very creepy music while a small piccolo applauds. The organ is Forte, the ex-court composer for the musicians during his human years. Forte is the only servant who does not want to be human again (not only because he wants to live forever, but he enjoys that the Beast loves hearing his music, when he is depressed at being a beast), so he plots to make the Beast avoid falling in love with Belle. He believes that "humanity is overrated" and that he has more use and power in his enchanted form. Forte sends Fife, his small piccolo servant, to destroy the merriment between the pair. Fife manages to break up the two, as they make snow angels. When Beast sees his "angel", he sees it as a "shadow of a monster" and leaves in fury and depression.

Believing that Christmas will brighten the Beast's mood, Belle creates a wonderful new book for him, and with a little persuasion for Cogsworth, Christmas is officially being prepared. The group goes to the castle's highest tower, which serves as a storage room for old decorations. In one of them lies Angelique, who once served as the Royal Decorator. However, she is not pleased to hear about Christmas, arguing that she will not raise her hopes again in a belief that they could all get together in celebration, only to have them destroyed by the Beast's foul temper and hatred for the holiday. Belle sings to them about how "hope is the greatest gift", saying that there is always hope, even for breaking the spell, and there will "always be a time when the world is filled with peace and love." Eventually, Angelique agrees.

However, Fife has been overhearing all this and rushes off to tell Forte. When the Beast finds out, he is not at all pleased. Forte plays along, saying that "the girl doesn't care how you feel about Christmas", separating the two even more. Beast reflects on that fateful Christmas day when his selfishness caused the Enchantress to place the spell on him and the castle. Belle enters the boiler room to get a Yule Log, explaining that it is a great tradition: "one log is chosen, then everyone in the house touches it, and makes a Christmas wish". Beast will not listen, shouting that she has no idea what it is to be a true prisoner, but she knows all too well. Belle will not give up, and concludes that they will have Christmas with or without Beast, but not before sending him her gift, the storybook. Belle and Chip plan to look for a Christmas tree.

Beast finds his gift, but Lumiere will not allow him to open it as it is not yet Christmas. He explains that everyone understands how Beast feels about the holiday, but giving a gift to another is a way of saying "I care about you." Beast gets in the mood, and asks Forte to compose a song as a present, who agrees unhappily. When he leaves, Forte puts his plans in motion, and plays beautiful music, attracting Belle to his room. Forte quickly manipulates the situation, telling her that the tree has always been Beast's favorite part of Christmas, and that the perfect tree lies in the Black Forest, the woods outside the castle. Getting the tree would break Belle's promise never to leave the castle, but she wants to make the Beast happy, so she agrees to go.

Beast is still waiting for Belle to show up, but Forte claims "she's abandoned you!" and feeds Beast's anger. Forte orders Fife "to make sure they don't come back", and mostly because of ice, a dangerous chain reaction starts that leads to Beast having to rescue Belle from drowning. Belle is locked in the dungeon for eternity, saying, "I thought you'd never be anything...but a beast." Soon, the others and Angelique admits that she was wrong to believe that Christmas could never come. They all agree that they do not need decorations or gifts to celebrate Christmas, they have each other, and that is the best gift they could ever ask for. Beast threatens to destroy the rose, but one of the flower petals fall on the present and he remembers the gift Belle gave him, then opens and reads it.

Remembering there is hope to break the spell, the Beast asks Belle for forgiveness and declares to the servants "Let's give Belle the Christmas she's always wanted!" But Forte, outraged that they are still falling in love, uses his magic music to destroy the whole castle, saying "they cannot fall in love if they're dead!" A guilty Fife disagrees, but is unable to dissuade him. Beast manages to get into the room, and destroys Forte's keyboard at Fife's direction, causing Forte to come crashing down.

Later, Belle and the Beast celebrate Christmas with the servants in the grand ballroom, where Belle is shown to her delight the new beautifully-decorated Christmas tree they put up for her. They continue to have a happy holiday, which brings us back to the present-time party, where Mrs. Potts says that if anyone actually saved Christmas, it was Belle. The others celebrate as the Prince gives Belle a gift - a single rose.

The film debuted on VHS and Laserdisc on November 11, 1997, with a DVD release coming the following October. Disney released a Special Edition VHS and DVD of the film in 2002, following the original movie's Platinum Edition VHS and DVD releases. The Special Edition DVD included a sing-along track, a behind-the-scenes featurette, a set-top game titled "Forte's Challenge", an "Enchanted Environment" virtual fireplace, and a music video of "As Long As There's Christmas" performed by the band Play.

Almost a decade later, Disney released the film on DVD again and on Blu-ray for the first time in 2011. The Blu-ray included almost all of the bonus features from the 2002 DVD (with the exception of the "Forte's Challenge" game), and also added the Sing Me a Story with Belle episode "Stick to It (Don't Give Up)". The Blu-ray was re-released in 2016, in commemoration of the original Beauty and the Beast movie's 25th anniversary. 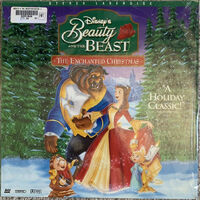 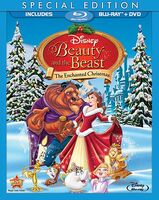 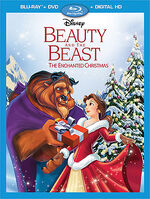