George Washington "Bugs" Bunny[1] (real name later changed to Bugsworth in Looney Tunes Cartoons) is an animated character created at Leon Schlesinger Productions, later known as Warner Bros. Cartoons, and originally featured in the Looney Tunes and Merrie Melodies series of theatrical short films. He is an anthropomorphic gray rabbit who is famous for his flippant, insouciant personality and his portrayal as a trickster. Although formative versions of the character existed as early as 1938, the fully realized Bugs Bunny is generally recognized as having made his debut in the 1940 Oscar-nominated short subject A Wild Hare, directed by Tex Avery. His popularity during the "Golden Age of American animation" led to his becoming a corporate mascot of the Warner Bros. company. In 2002, he was voted #1 in TV Guide's Top 50 Greatest Cartoon Characters.

As the most prominently-known of the Looney Tunes characters, Bugs has appeared in several of the franchise's Christmas specials.

Bugs Bunny's Looney Christmas Tales marks the first Christmas special to feature Bugs. In the special's first segment, "Bugs Bunny's Christmas Carol", he tries to bring the holiday spirit into the accounting office of Ebenezer Scrooge (played by Yosemite Sam), but is thrown out each time. Then, when Scrooge fires Bob Cratchit (Porky Pig) and threatens to evict him and his family from their home, Bugs decides to teach him a lesson. Disguising himself as "the Ghost of Christmas", Bugs scares Scrooge into becoming a nicer person. Later, in "The Fright Before Christmas", Bugs is reading the story of The Night Before Christmas to his nephew, Clyde, when he suddenly gets a visit from the Tasmanian Devil, dressed as Santa Claus.

The infant version of Bugs featured in the television spin-off Baby Looney Tunes naturally made an appearance in that series' Christmas episode, "Christmas in July".

Bugs has a comparatively minor role in Bah, Humduck! A Looney Tunes Christmas. At the beginning of this direct-to-video special, Bugs appears, telling the audience that while rabbits are usually associated with Easter, he himself is more fond of the winter holidays. He then pays a visit to the Lucky Duck Megastore, run by its Scrooge-like owner Daffy Duck. After coining the film's titular phrase (which Daffy decides to use as his catch phrase), Bugs warns Daffy that he is the kind of person who is likely to get visited by ghosts on this very night, foreshadowing the plot. Later, when they both get trapped inside the store due to being snowed in and Daffy is trying to hide from The Ghost of Christmas Yet to Come, Bugs sticks him in numerous uncomfortable hiding spots.

As one of the main characters on The Looney Tunes Show, Bugs also appears prominently in its Christmas episode, "A Christmas Carol". At the beginning of the episode, Bugs does not feel like celebrating the holiday due to the intense heat wave. When Lola Bunny decides to put on a Christmas play to get people into the spirit, Bugs gives her his copy of A Christmas Carol to use for reference. However, Lola ends up writing a completely different script that has nothing to do with A Christmas Carol other than sharing its title, and Bugs has to help her with her own lines. Although he finds Lola's script to be completely ridiculous, Bugs respects his girlfriend's commitment to it and does not belittle her efforts. As such, when all the other cast members accidentally fall through a trap door Lola installed right before they can perform, Bugs performs most of Lola's play as a one-man show for her (before eventually falling down the trap door himself), and regains his Christmas spirit in doing so. At the end of the episode, Bugs sings "Christmas Rules" with the rest of the cast.

In "Tis the Seasoning", an installment of the New Looney Tunes short series, Bugs goes to the store on Christmas Eve to find an E-Z Cook Acorn toy for his friend Squeaks the Squirrel. He manages to find the last E-Z Cook Acorn in the store, but then has to battle Yosemite Sam for it. He eventually succeeds and buys the toy, only to learn immediately afterward that the store was about to receive another shipment of them.

In the Tiny Toon Adventures Christmas episode, "It's a Wonderful Tiny Toons Christmas Special", Bugs portrays the role of Buster Bunny's guardian toon angel, Harvey. As Harvey, Bugs shows Buster how miserable life in Acme Acres would be if he was never on Tiny Toons. At the very end of the episode, after the Tiny Toons gang performs the closing song, Bugs removes his Harvey costume and delivers the last line of the special: "Not bad... for amateurs."

In the Taz-Mania episode "No Time for Christmas", Bugs can be seen on the cover of the Life Magazine issue that Bushwhacker Bob is reading.

In the Johnny Bravo episode "A Johnny Bravo Christmas", Johnny and Little Suzy get into an argument that quickly de-evolves into them repeating "Are not!" and "Am too!" at each other. Eventually, Suzy tricks Johnny by reversing their lines, and then says, "Ha! I just Bugs Bunny'd you!" 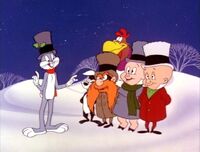 Bugs leading a performance of "Deck the Halls" with his fellow Looney Tunes stars. 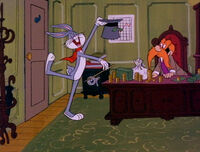 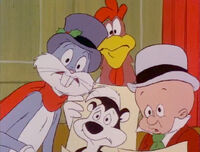 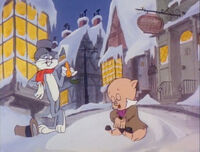 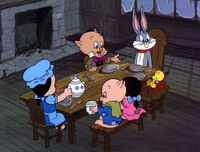 Cratchit introduces Bugs to his family. 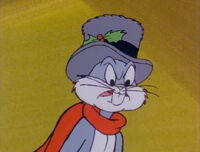 "Dis time, that Scrooge has gone too far! Of course you realize, dis means war." 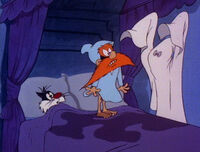 Bugs, as the "Ghost of Christmas", gives Yosemite Sam a good haunting. 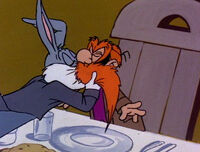 Bugs compliments Sam on his performance as Scrooge. 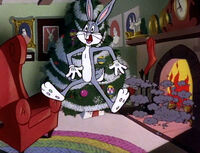 Bugs is startled when he hears Taz coming down his chimney. 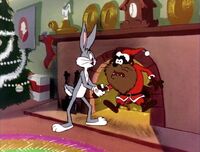 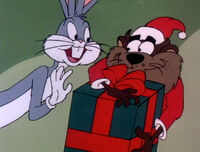 Bugs recommends that Taz wait to open his gift. 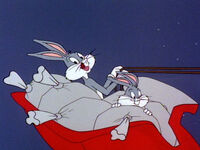 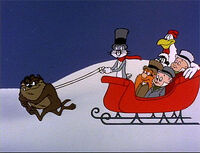 In the closing segment, Taz pulls Bugs and the gang in a sleigh...

Bugs with Daffy in Bah, Humduck! A Looney Tunes Christmas.

Bugs loans Lola his copy of A Christmas Carol.

Bugs disguised as a mall Santa.

Bugs sitting in his easy chair.