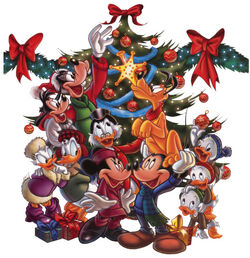 The Walt Disney Company is the largest media and entertainment conglomerate in the world, known mainly for its family-friendly products. Founded in 1923 by brothers Walt Disney (1901-1966) and Roy O. Disney (1893-1971) as an animation studio, it has become one of the biggest Hollywood studios, and owner and licensor of twelve theme parks and several television networks, including ABC and ESPN. Mickey Mouse serves as the official mascot of the Walt Disney Company.

Winnie the Pooh and Christmas Too

The Nightmare Before Christmas