ABC (short for American Broadcasting Company) is a US television network currently owned by The Walt Disney Company. The network was founded in 1943 and first started airing television programs in 1948. 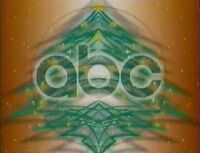 A transparent ABC logo in front of a Christmas tree.