The Fox Broadcasting Company, commonly referred to as simply Fox (and stylized as FOX), is an American television network owned by Fox Entertainment Group, part of Rupert Murdoch's News Corporation. It was launched on October 9, 1986.

Categorized here are Christmas specials, episodes, and movies that were originally broadcast on Fox. 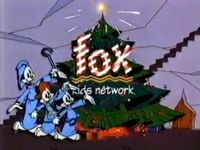 The Fox Kids logo (1992-1996) in front of a Christmas tree with Yakko, Wakko and Dot from Animaniacs.

The FOX logo surrounded by snowy trees and snowflakes, as seen in a promo for Ice Age: A Mammoth Christmas.
Trending pages