based on Peanuts characters by Charles M. Schulz

Charlie Brown's Christmas Tales is the third prime-time Christmas television special based on the comic strip Peanuts. It was produced in 2002 for ABC, created to fill out the hour-length time slot when they broadcast the unedited version of A Charlie Brown Christmas, and aired alongside it every year through 2019.

The special consist of a series of vignettes, each one starring a different member of the Peanuts gang in various Christmas-themed stories.

Lucy is ice-skating at the pond and mentions that her skating club is having a Christmas show this year, and she figures she could participate in it if she could get a partner, preferably one who is "handsome and graceful." Snoopy skates by, as if to ask for the position, but she tells him to go away. She tries to ask Schroeder, who is playing hockey right now, if he would be her partner, but he refuses. Snoopy skates by again but he accidentally knocks her down. She angrily asks him to watch where he's going, and that there's no room for both of them on his pond. But when he licks her in a final attempt to kiss up, she pulls his wool cap down over his head and tells him to go home.

Later, Snoopy is working as a street corner Santa when Rerun shows up, demanding to know why Santa didn't bring him all the things he wanted last year. Snoopy responds by barking angrily at him, and then starts playing "Oh! Susanna" on the accordion, which Lucy comments "isn't very Christmasy" as she and Linus walk by. Upon hearing that, he quickly switches to "Christmas Time is Here", with Woodstock whistling in unison.

Sometime later, Snoopy is sleeping on top of his doghouse and gets buried by snow. Upon awakening, he kicks the snow off of his roof only for it to land on the ferocious cat who lives next door. Charlie Brown suggests that Snoopy should try to make peace and show some holiday spirit to the cat, but when Snoopy tries to do so, the cat takes a ferocious swipe and leaves a Christmas tree-shaped hole in Snoopy's house.

Linus is trying to write a letter to Santa Claus, saying he does not really want any presents and will not mind if Santa skips their house this year. Lucy criticizes his letter and crumples it up, telling him to try again. Linus starts writing another letter, asking Santa is his sleigh is all ready, but then throws it away. He starts on another letter, saying he is not sure what he wants for Christmas, suggesting maybe Santa should send him a catalog.

At school, Linus mentions to Charlie Brown that he kind of likes this new girl who sits behind him in class, but she keeps changing her name. When the girl in question says her name today is Jezebel, Linus points out to her that was the name of King Ahab's evil wife in the Old Testament, so she says her name is now Susan. Linus starts working on his Christmas card list and asks the girl what her home address is, to which she responds "Aren't you kind of old for me?" Linus gets annoyed with her and is then sent to the principal's office for his outburst.

Later, at lunchtime, the girl gives Linus her home address and then says that her name is now Lydia, and that last week it was Rebecca, though she also likes being called Rachel. Linus decides he'll just address the girl as "her" on his card. A few days later, Lucy tells Linus that the Christmas card he sent to that girl was sent back to him because the address was nonexistent. Linus is aggravated that the girl is driving him so crazy, but when Lucy asks why he bothers with her, Linus responds that "she fascinates me."

Sally announces to Charlie Brown that she is going to make paper airplanes for everyone this Christmas and then gives one to him early. She then starts writing a letter to Santa, who she thinks is a woman named Samantha Claus. She includes a request for "Samantha" to bring Charlie Brown a new bicycle, but then takes that back after Charlie Brown jokes about her mistake. Later, Sally comes home from school, upset and embarrassed that everyone at school all laughed at her for thinking Santa's name was Samantha.

After working on addressing her Christmas cards and being told the story of the Three Wise Men by Linus, Sally goes out to "fall down a Christmas tree". When Charlie Brown questions her about her plan, she says "I don't know how to cut down a Christmas tree. When I look at, I hope it'll just fall down." She finds a small tree outside a neighbor's yard. When the kid who lives there questions what she's doing here, she says she's waiting for the tree to fall down. The kid laughs, saying that she can have the tree if it actually falls over - at which point it does. After Sally brings the tree home, the kid shows up on their front porch, demanding Sally give the tree back to him, but she refuses, telling him to leave or else she will send Snoopy (who is currently decorating the tree) after him. That night, though, Sally cannot sleep and asks Charlie Brown if she should return the tree, despite that she does not feel guilty - that is, until Charlie Brown tells her that tomorrow is Christmas Eve. The next morning, Sally and Snoopy arrive at the kid's house to bring the tree back to him, but he instead tells them that she is allowed to keep the tree.

Later, as Charlie Brown is helping Sally redecorate the tree, he tells her about how their grandmother always hung her stocking up on Christmas Eve and would always find it full of apples and oranges. Sally grabs a sock out of her dresser drawer and, noticing how small it is, observes, "I can see it now - three grapes." She then decides to hang a lot of socks on the chimney.

Peace on Earth from Lucy

Lucy wishes Charlie Brown a merry Christmas, saying she believes they should put aside their differences and try to be kind at this time of the year; when Charlie Brown asks why they cannot be like this all through the year, she calls him a fanatic.

Later, while visiting Schroeder, Lucy gives him a list of things that "you might want to give me," which he promptly throws away. Lucy then remarks that she does not want Schroeder to buy anything for her, because she knows that he hates her; when Schroeder points out that he has never said that, she loudly screams "Then buy me something!!"

At home, Lucy gets Linus to write her letter to Santa as she dictates. She claims to have been perfect all year, a claim that Linus immediately questions; she responds by punching him out and then saying she has an opening for a new secretary. She then starts writing the letter herself, saying she hopes Santa is in good health and telling him to drive safely.

Later, when Lucy asks if Linus would like to know which things she would like for Christmas, he declines, saying he wants his gift for her to be a surprise. Lucy is pleased at that thought, but Linus apparently has no intention of giving her a present. Lucy insists to Linus that he has to give her a Christmas present, claiming that it says so in the Bible. Linus tells her it doesn't actually say that in the Bible, but Lucy claims he does have to give her a present anyway because the word "sister" is mentioned in the Bible.

Charlie Brown is working on a card for the little red-haired girl and asks Linus for advice. Sally then comes by and calls Linus her "sweet babboo", much to his annoyance. After Linus complains about Sally always calling him that, Charlie Brown shows him the finished card, which is signed "Merry Christmas from your sweet babboo." Linus glares at Charlie Brown, who says that it is a family expression.

When Charlie Brown points out that they should leave a snack for Santa Claus, Sally initially suggests broccoli before deciding on putting a plate of cookies by the tree, and then hiding someplace so she can see Santa. A few minutes later, Sally thinks to have seen Santa, but it is actually Snoopy in his Santa outfit.

On Christmas Eve, Sally wakes up Charlie Brown in the middle of the night, saying she was dreaming about sugarplums and needs to know what they are. The next morning, she wakes him up, saying Santa didn't leave him anything, and then adds "April Fool!" Later, Charlie Brown receives a call from Lucy, asking if Snoopy likes the sweater she made for him. Charlie Brown then tells Sally that he had ordered a toy bicycle for her doll set, but it never came, as it was likely delivered to the wrong address, so she angrily remarks that whoever got it can enjoy it; it is then shown that Woodstock received the toy bicycle.

The special was first issued to home video as a bonus special on the original 2004 DVD release of I Want a Dog for Christmas, Charlie Brown, distributed by Paramount Home Entertainment.

In 2009, after the video rights to the Peanuts specials were transferred to Warner Home Video, the special was given its own DVD release, which was sold exclusively at CVS Pharmacy stores and included another Peanuts special, Is This Goodbye, Charlie Brown? This DVD was later reissued as a standard retail release the following year, and was later included in the Snoopy's Holiday Collection box set with Warner's I Want a Dog for Christmas, Charlie Brown and Happiness is... Peanuts: Snow Days DVDs. 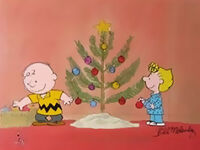 Retrieved from "https://christmas-specials.fandom.com/wiki/Charlie_Brown%27s_Christmas_Tales?oldid=176005"
Community content is available under CC-BY-SA unless otherwise noted.