Charles "Charlie" Brown is the main character from the popular newspaper comic strip Peanuts. He is a child who possesses endless determination and hope in spite of his constant failures, but who is ultimately dominated by his insecurities. In 2002, he and his dog Snoopy were ranked #8 in TV Guide's Top 50 Greatest Cartoon Characters. As the main character of Peanuts, Charlie Brown has also played a prominent role in all of the Christmas specials spun off from the comic.

In the very first Peanuts television special, A Charlie Brown Christmas, Charlie Brown is depressed because he believes that Christmas has become too commercial, so Lucy suggests that he direct the school's Nativity pageant in order to lift his spirits. As the director of the Christmas play, Charlie Brown is determined not to let the play become commercial and to focus on the traditional side of the story. He decides maybe they need a Christmas tree in order to give the play the "proper mood". Accompanied by his friend, Linus, he goes to a local Christmas tree lot and picks out a small, poor-looking baby tree that happens to be the only real tree on the lot. The rest of the kids laugh at Charlie Brown about the tree he has picked out, leading him to wonder if he really knows what Christmas is all about and loudly asking if anyone can tell him. After hearing Linus quoting the true meaning of Christmas, Charlie Brown is filled with a new-found sense of inspiration and brings the little tree home to decorate. Unfortunately, the tree bends under the weight of the first ornament Charlie Brown places on it, leading him to think he has killed it. However, the rest of the gang then cheers him up by fixing the tree back up and decorating it, wishing him a Merry Christmas.

"The Play", a Christmas-themed segment from the last episode of The Charlie Brown and Snoopy Show, focuses on Charlie Brown writing an essay about the events of Christmas the previous year.

At the beginning of It's Christmastime Again, Charlie Brown, Charlie Brown goes around town trying to sell homemade Christmas wreaths, but is not very successful at it due to trying to sell them before Thanksgiving. Sally and Snoopy also tried to help him sell the Christmas wreaths. Later, he wants to buy a pair of gloves that cost twenty-five dollars as a Christmas present for his girlfriend, Peggy Jean; he ends up selling his comic book collection in order to raise the money. However, right after he buys the gloves, he meets Peggy Jean in the store and finds out that her mother already bought her a pair of gloves, so he instead gives the gloves he bought to Snoopy. Later, while his sister, Sally, continually rehearses saying "Hark" in the school's Christmas pageant, Charlie Brown spends the sequence carrying a hockey stick; this results in Sally mistakenly shouting "Hockey stick!" when she goes onstage in the play.

In Charlie Brown's Christmas Tales, Charlie Brown is the central character of the last segment. He is shown working on a Christmas card for the little red-haired girl he has a crush on, and after Sally flirts with Linus again, he signs it as "Merry Christmas from your sweet babboo." He also answers Sally's inquiry about what sugarplums are when she says she was having a dream about those. In addition, Charlie Brown appears prominently in Sally's segment of the special, where she announces that she's making paper airplanes for everyone this Christmas, and he just got her first one.

Compared to the previous Peanuts Christmas productions, Charlie Brown has a comparatively minor part in I Want a Dog for Christmas, Charlie Brown. Rerun, Linus and Lucy's little brother, repeatedly asks Charlie Brown if he can play with Snoopy, as he has always wanted a dog himself. Later, Charlie Brown tells Rerun about Snoopy's siblings, which gets Rerun thinking he should take in Snoopy's brother, Spike, as his own pet. However, Mrs. Van Pelt does not allow Spike to stay with them, so Charlie Brown tries to find a new home for Spike, but none of the other kids want to take him in.

In "Christmas is Coming", the second Christmas episode of the 2014 French Peanuts shorts, Charlie Brown finds himself getting stuck lying on an icy sidewalk when he slips walking on it while wearing his heavy winter coat and later expresses concern when Snoopy takes his Beagle Scouts on an expedition during a blizzard. The storyline about him buying gloves for Peggy Jean is also adapted again.

Charlie Brown makes a very brief cameo at the end of the My Life as a Teenage Robot Christmas special, "A Robot for All Seasons", in which he is referred to as "Round-headed kid" in the end credits. He is shown receiving a bottle of hair tonic from Jenny. 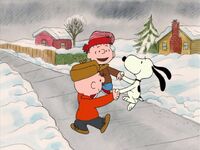 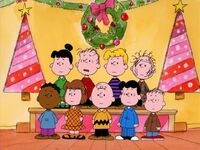 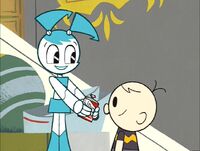 Charlie Brown's cameo in "A Robot for All Seasons".
Add a photo to this gallery

Retrieved from "https://christmas-specials.fandom.com/wiki/Charlie_Brown?oldid=141877"
Community content is available under CC-BY-SA unless otherwise noted.