Christmas Carol: The Movie is a 2001 traditionally animated (with live-action bookends) British Christmas film directed by Jimmy T. Murakami and loosely based on A Christmas Carol by Charles Dickens. The film premiered at the Toronto International Film Festival on September 12, 2001 before being theatrically released in Europe by Pathé on December 7th that same year.

It is known for the song "What If" that appears near the end of the film.

In the United States, the film was released straight to VHS and DVD on October 7, 2003 by MGM Home Entertainment. Aside from the MGM logo added at the beginning and end, the feature is slightly abridged to make it a fully traditionally animated feature by deleting out the live-action bookend scenes. However, the bookend scenes are added into the DVD's special features. 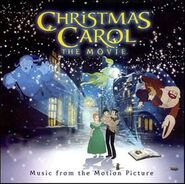 Soundtrack
Add a photo to this gallery

Retrieved from "https://christmas-specials.fandom.com/wiki/Christmas_Carol:_The_Movie?oldid=160332"
Community content is available under CC-BY-SA unless otherwise noted.