Christmas Comes to Pac-Land is an animated Christmas special produced by Hanna-Barbera, spun off from their Saturday morning cartoon based on the Pac-Man video game series. It first aired on ABC on December 16, 1982. This special later aired annually on the USA Network in the late 1980s, on Cartoon Network during the 1990s and early 2000s, and on Boomerang in the 2000s and early 2010s.

Pac-Man, Mrs. Pac-Man, Baby Pac, Chomp-Chomp, and Sour Puss are all out enjoying a rare snowfall in Pac-Land - making "snow ghosts", playing in the snow, and enjoying quality family time together. The family then hops into their snowmobile for a ride, when they suddenly find themselves being chased by The Ghost Monsters - Inky, Blinky, Pinky, Sue, and Clyde. The Pac family and the ghosts engage in a high-speed chase through the countryside until the mobile goes over a cliff, sending the Pacs flying and stranded in the snow. Pac-Man notices a nearby Emergency Power Pellet box, but when he goes to retrieve the pellets, he discovers that the box is empty. The ghosts catch up to the Pacs where they reveal that they have stolen the Power Pellets. Pac-Man angrily begins to throw snowballs at the ghosts to defend his family. Upset by being hit with snowballs, Inky stupidly retaliates by throwing the Power Pellets back at the Pac family. The Pacs catch the pellets in their mouths and use the newly gained power to "chomp" the ghosts, reducing them to nothing but floating pairs of eyes. The Ghost eyes begin to fly away to regroup and restore their bodies.

Meanwhile, Santa Claus and his reindeer are flying high in the sky, preparing to distribute gifts to all the good boys and girls. Santa begins to sense that they are a bit off-route and maybe lost; Unknowingly, Santa guides his sleigh right into a collision path with the escaping ghosts. The reindeer, terrified by the sudden sight of the ghostly eyes in their path, cause Santa's sleigh to spiral out of control and crashes into the Pac-Land landscape.

The Pac family, accompanied by policemen Morris and O'Pac, come across the wreckage but are not sure what to make these foreign characters. Santa explains his predicament, telling the Pacs all about his job as toy-giver and peacemaker. The citizens of Pac-Land do not quite understand, but being the friendly and helpful creatures that they are, they agree to help. Unfortunately, Santa's sleigh is ruined and the reindeer are exhausted, injured, and a mess.

The family takes Santa inside and fixes him a nice hot cup of cocoa. Pac-Man, eager to help in any way he can, is sent by Santa to go out and retrieve the lost sack of toys – for without those, Christmas can never be saved. So Pac-Man and Chomp Chomp head out to brave the cold, and the ghosts, in search for the bag of toys. Meanwhile, the ghosts (now rejuvenated with new bodies) find the sack and proceed to play with the toys. Pac-Man manages to make off with the sack, but the ghosts manage to chomp him in the process in payback for earlier, and leave him alone in the forest, weakened.

Despite his energy nearly gone and nearly being frozen to death, Pac-Man returns home with the toys. Everyone is excited that he found the sack, but Santa Claus feels that it may be too late for him to continue his Christmas run. There is no way his reindeer will be up for the task, and there is no way they will be able to make up for all the lost time. Santa is sure that this will be the first Christmas in history that he misses. However, Pac-Man quickly conjures up a way to save Christmas; he figures they need to boost the reindeer's energy levels.

Pac-Man, his family, and their friends start driving off to the fabled Power Pellet Forest, with Santa following behind them in his sleigh, when they suddenly run into the ghosts again, who refuse to let them pass to reach the Power Pellets. Pac-Man tells the ghosts not to chomp them, telling them about Christmas, and how so many kids will not get their presents if they do not save Christmas. Although Clyde is not convinced as easily, his fellow ghosts plead to him to think of the children, so he eventually, reluctantly, allows the Pacs and Santa to go unharmed.

After arriving at the Power Pellet Forest, the reindeer begin chomping away at the power pellets, and immediately start glowing. Santa is thrilled, and he flies away from Pac-Land to make his delivery. Pac-Man is delighted that Christmas is saved. When the family arrive back home, they are surprised to find that Santa made an extra stop this year - at Pac-Man's house. There are presents for everyone, even the ghosts.

The special was made available on VHS after its initial broadcast, and was notably the only episode of the series to ever be released on VHS. It was later made available on Warner Archive's Pac-Man: The Complete Second Season manufacture-on-demand DVD set (even though it was actually aired during the show's first season), released on September 11, 2012. 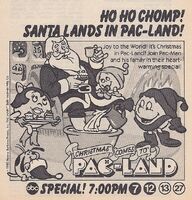 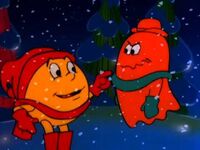 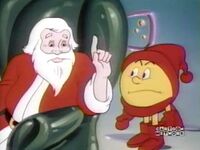 Retrieved from "https://christmas-specials.fandom.com/wiki/Christmas_Comes_to_Pac-Land?oldid=145284"
Community content is available under CC-BY-SA unless otherwise noted.