Christmas Eve refers to the evening or entire day preceding Christmas Day, a widely celebrated festival commemorating the birth of Jesus that takes place on December 25th. It is a culturally significant celebration for most of the Western world and is widely observed as a full or partial holiday in anticipation of Christmas Day.

One reason celebrations occur on Christmas Eve is because the traditional Christian liturgical day starts at sunset, an inheritance from Jewish tradition, which in turn is based in the story of creation in Genesis: "And there was evening, and there was morning – the first day." This liturgical day is followed for all days in the Eastern rite and the custom of beginning Christmas celebration (as well as Sunday and the other major festivals) in the preceding evening is preserved in western churches that have altered the liturgical day to start at midnight, for example the Roman Catholic Church. Many churches still ring their church bells and hold prayers in the evening before holidays; for example the Nordic Lutheran churches. In some languages, such as the Scandinavian, Christmas Eve is simply referred to as "Christmas Evening".

Since Christian tradition holds that Jesus was born at night (based in Luke 2:6-8), Midnight Mass is celebrated on Christmas Eve, traditionally at midnight, in commemoration of his birth. The idea of him being born at night is reflected in the fact that Christmas Eve is referred to as "Heilige Nacht" ("Holy Night") in German, "Nochebuena" ("the Good Night") in Spanish and similarly in other expressions of Christmas spirituality, such as the song "Silent Night".

Nominally religious people, or people who are not formal with definitions, may see the whole day as a day of celebration or as just the day before Christmas. Millions of people around the world with no Christian or religious affiliation or background also celebrate Christmas and Christmas Eve. The emphasis of celebration on Christmas Eve varies from country to country and region to region. 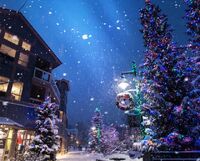