Christmas Eve on Sesame Street is an hour-long Christmas television special based on the television series Sesame Street. It was originally broadcast on PBS on Sunday, December 3, 1978, and won the 1979 Primetime Emmy Award for Outstanding Children's Program.

The opening features the inhabitants of Sesame Street enjoying an ice skating party. Big Bird has trouble skating, but a little girl gives him a hand, and he ends up doing very well. Bert falls victim to the antics of Ernie, Cookie Monster, and The Count as they play ice hockey with one of his shoes as the puck, clown around while barrel jumping, play a practical joke on him, and make him very dizzy in a game of Crack the Whip, the last of which somehow sends Oscar thrown into the air, tumbling down a flight of stairs, through a couple of walls, and onto the sidewalk where Big Bird and Patty catch up to him and get him back up on his feet. After everyone leaves the ice rink, the story leads into three principal plotlines.

Oscar asks Big Bird and Patty how exactly Santa Claus is able to fit in a narrow chimney, saying that there will be no Christmas presents if he can't go down them. Distraught, once they return home, Big Bird and Patty enlist the help of Kermit and Grover to ask children how he does it. Their responses vary. Big Bird even tries to experiment by having Mr. Snuffleupagus play Santa entering a pretend chimney, but he still does not find the answer. Patty tries to comfort him, but fails instead. He winds up trying to stay up all night on the brownstone's roof watching for Santa, but falls asleep while everyone becomes very worried and starts looking for him. During the search, Maria confronts Oscar for upsetting him. He says he was only teasing him and agrees to search for him. Back on the roof, at one point, sleigh bells and hoofbeats are heard, and a person's shadow falls over the dozing Big Bird. He is startled awake, but sees nothing unusual.

Meanwhile, in a retelling of The Gift of the Magi, Bert and Ernie want to give each other a Christmas present, but they both have no money. Bert trades away his prized paper clip collection to buy a soap dish for Ernie's Rubber Duckie, but Ernie has bartered that to buy Bert a cigar box for his paper clip collection. Mr. Hooper realizes what is happening and gives both their treasured possessions back while also reminding the audience that being Jewish, he doesn't celebrate Christmas but understands its spirit.

While all this is going on, Cookie Monster tries to write Santa and request cookies for Christmas. However, as he talks to himself about the many different kinds he wants, he gets hungrier and hungrier, absentmindedly devouring the instruments he is trying to use (a pencil, a typewriter, and a telephone). At the Robinsons' apartment, he laments that he was unable to contact Santa. Gordon reminds him that he might get what he wants if he leaves a plate of cookies for Santa.

At the end, when Big Bird comes down from the roof to warm up, Susan and Gordon make sure he stays. They comfort him by showing that there were indeed presents brought, but having him back is more important. Then Oscar appears and, stepping out of character, admits he's glad to have him back again...only to ask him how the Easter Bunny hides all his eggs in one night! The special concludes with the Robinsons returning to their apartment to find that Cookie Monster has eaten the needles and decorations off their Christmas tree. ("Scotch Pine delicious, but Douglas Fir give me heartburn!") 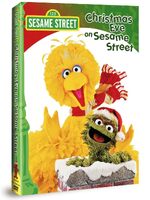 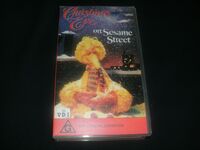 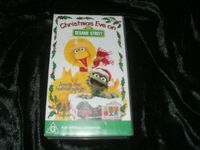 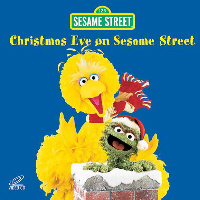 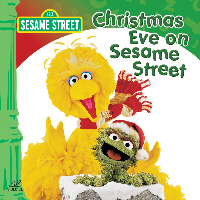 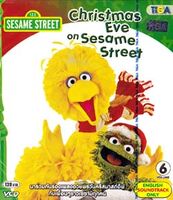 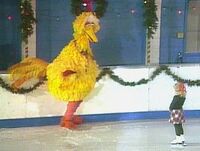 A little girl teaches Big Bird how to ice skate. 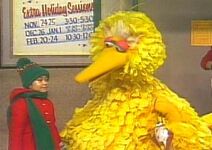 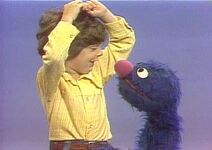 Grover asks a child how he thinks Santa Claus comes down the chimney. 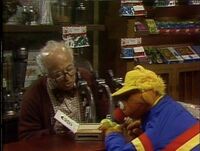 At Hooper's Store, Ernie trades his Rubber Duckie to get Bert a cigar box for his paper clip collection. 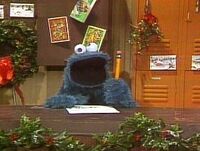 Cookie Monster attempts to write a letter to Santa. 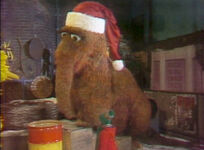 Snuffy gets into a barrel to show how Santa gets down a chimney. 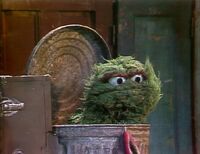 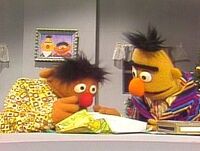 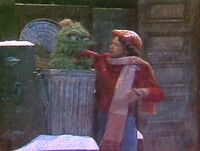 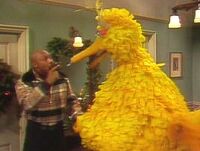 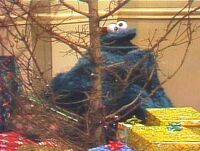 "Scotch pine delicious, but Douglas fir give me heartburn!"
Add a photo to this gallery

Retrieved from "https://christmas-specials.fandom.com/wiki/Christmas_Eve_on_Sesame_Street?oldid=146641"
Community content is available under CC-BY-SA unless otherwise noted.