"Christmas Every Day!" is the first Christmas-themed episode of the Nickelodeon animated series The Fairly OddParents, originally aired on December 6, 2001. As the title suggests, the plot is based on the 1892 short story of the same name.

Christmas is Timmy Turner's favorite day of the year, as in addition to the tremendous amount of gifts he receives from Santa Claus, it is also the one day of the year he is guaranteed that his mom and dad will stay home and not have Vicky babysit him. So when the day arrives, he expresses through song to Cosmo and Wanda that he wishes Christmas were every day. Despite their reluctance, they grant his wish.

At first, Timmy is thrilled to have Christmas every day, but things soon take a sour turn, as he begins to notice when he starts receiving less and less presents for obvious reasons. And because Christmas now falls on every day, all the schools, stores, and businesses remain closed, and everybody has become so sick of Christmas that the armed forces are working to shoot Santa's sleigh down. Even worse, the mascots for the other holidays (led by the Easter Bunny and consisting of Baby New Year, Cupid, and The April Fool) are furious that their respective holidays can no longer come.

Unfortunately, Timmy cannot reverse his wish, because every Christmas Eve, all the fairies in Fairy World transfer their magic to Santa so that he can make his annual journey, and they do not get it back till Christmas is over; obviously, since Christmas is still going on, Cosmo and Wanda cannot reverse the wish. The angry holiday mascots, planning to banish Santa to the non-existent date of February 33rd, kidnap Cosmo and Wanda (in order to use what remains of their magic against Santa's) and take off in the April Fool's bus.

Using a high-speed snowmobile, Timmy makes his way to Greenland, all the while getting help from other kids who celebrate Christmas, soon catching up with the holiday mascots. Disguising himself as another holiday mascot named Birthday Boy, Timmy tricks the mascots into letting him on their bus, then slows them down by puncturing their tires with Cosmo and Wanda's crowns. He makes it to Santa's workshop in time to warn Santa of the oncoming attack, but the mascots soon catch up.

Santa's attempts to fight them off are futile, and his magic is soon sucked out of him and transferred to the Easter Bunny, who prepares to blow Santa to February 33rd with an egg-shaped bomb. Fortunately, the kids who helped Timmy in his journey show up, along with every other child with Internet access, and they help him make it clear to the holiday mascots that they do love their respective holidays as well (just not as much as they love Christmas). The mascots, realizing the error of their ways, give Santa's magic back to him, but it doesn't change the fact that it's still Christmas. Timmy then rallies all the kids to tell Santa that what they want is for it to be December 26th, which they do. Thanks to that, the endless Christmas finally ends, and things return to normal, and to make sure no other kid makes the same wish Timmy made, the Fairy Council adds a new rule to Da Rules, forbidding fairies from granting "Christmas Every Day" wishes again. However, to make amends for the whole mess, Timmy, Cosmo, Wanda, and the other holiday mascots have to deliver the Christmas presents next year while Santa and his wife take a vacation in Hawaii.

"Christmas Every Day!" was made available on home video for the first time as part of the NickToons Christmas compilation DVD, released by Paramount Home Video on September 30, 2003. It was made available again on the Nick Picks: Holiday DVD, released on September 26, 2006. The episode was then included on Amazon.com's The Fairly OddParents: Season 2 manufacture-on-demand DVD set, released on June 2, 2009. Its most recent release was on the It's a NickToons Christmas! DVD, which was included as an exclusive bonus disc with copies of the It's a SpongeBob Christmas! DVD that were sold at Target. 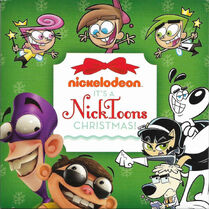 Retrieved from "https://christmas-specials.fandom.com/wiki/Christmas_Every_Day!_(Fairly_OddParents)?oldid=71780"
Community content is available under CC-BY-SA unless otherwise noted.