VHS
DVD
"Christmas Night" (クリスマスであそぼ!, Let's Play in Christmas!?) is the first Pikachu's Winter Vacation special and also the second Christmas special based on Nintendo's Pokémon video game franchise, first broadcast in Japan on December 22, 1998. In the United States, it was released as a direct-to-video special and later aired as an episode of Pokémon Chronicles.

Ash, Misty, Brock, and their Pokémon are planning to spend the holidays in a cabin that was nicely lent to them by Professor Oak. However, the humans have to leave to go pick up the Christmas cake. Their Pokémon - Pikachu, Bulbasaur, Squirtle, Togepi, Psyduck, and Vulpix - are left at the cabin, with Pikachu in charge.

The Pokémon enter the kitchen, to find the table prepared for a party. The Pokémon get on the table, Togepi getting an assist from Bulbasaur. Vulpix sniffs curiously at a party hat, while Pikachu examines another one. Togepi waves a hat wildly, Bulbasaur balances one on his nose, Squirtle tries to look through its, and Psyduck tries to eat his. Vulpix realizes its use and flips a hat onto its head. The others, getting the idea, do the same, except for Psyduck, whose hat falls down onto its tail.

Togepi and Pikachu return to the living room, and start looking at the tree again. Togepi sees its reflection in an ornament and smiles. Pikachu does the same, then starts making funny faces at the ornament, its reflection causing Togepi to giggle.

Nearby, Vulpix is digging through a stocking. It fishes out a dice game and three pieces of candy. Unfortunately, it sticks its head a bit too far inside and ends up getting stuck in the stocking. Vulpix attempts to shake it off. Not being successful, it tries to walk off casually. However, it ends up missing the doorway and walking into the wall, causing it to fall onto its back.

Back on the table, Psyduck picks up a bottle of Pokémon Cider. It sticks the bottle in its mouth in an attempt to pull the cork off, but fails. It pulls it back out, but suddenly notices the carbonation and holds the bottle to his ear. Pleased with the hissing sound, he shakes the bottle a bit, then holds it up again. Realizing it's making more noise now, Psyduck begins to shake it more.

Meanwhile, Bulbasaur is still in hot pursuit of Squirtle. Pikachu and Togepi, still at the tree, watches as they run past three times. Bulbasaur then uses Vine Whip, wrapping its vines around Squirtle, who, in its panic, runs around the tree, causing the vines to knock the tree of balance. Pikachu quickly pushes the tree back upright.

Suddenly, Vulpix comes leaping into the scene and lands on top of the tree, tilting it back the other way. Pikachu quickly bolts around to the other side and shoves it upright again, with a bit more effort this time. The stocking having fallen off its head, Vulpix leaps back to the floor once the tree is upright once more. Pikachu says something to Vulpix, and Togepi cheers.

However, Bulbasaur hasn't given up the chase of Squirtle, who ends up running around the tree again. This time, however, Squirtle's leg gets caught up on a strand of lights, which threatens to send the tree falling over again. Vulpix runs for it while Pikachu begins to strain to hold the tree upright once more.

Back in the kitchen, Psyduck's shaking causes the cork to blow out of the bottle, sending Psyduck toppling backwards. The cork shoots up, hits off the ceiling, then off the back wall. Pikachu sees it coming, and takes it right in the face, getting knocked away. Pikachu hits the floor, and the tree comes down right on top of it.

The crash stops Bulbasaur's chasing, and both it and Squirtle, as well as Vulpix, look to see what happened. Pikachu eventually emerges from under the fallen tree, and Squirtle and Bulbasaur burst into laughter. Pikachu angrily stands up, and Bulbasaur and Squirtle quickly clam up, knowing what's coming.

Burning with rage, Pikachu unleashes a powerful Thunderbolt Attack. However, the electricity goes straight into the lights, blowing out the power in the whole cabin. The Pokémon are left in darkness, and they're looking around, wondering what happened.

Pikachu makes way to a Music Box that fell off the tree and pulls it upright. It opens, and a beautifully lit tree model is inside, and music begins to play. Awed by this, the Pokémon gather around to watch it. The music plays out, though, and both the music and the lights stop, leaving the Pokémon disappointed.

Pikachu, however, realizes that, with a bit of work, the fallen tree behind them could be just as beautiful, and explains this to the others. The other Pokémon eagerly accept this, and soon, Squirtle, Bulbasaur, Pikachu, and Vulpix are working to set the tree up again, while Togepi and Psyduck work together to gather up the fallen ornaments.

When Ash, Misty, and Brock return, they find the cabin pitch black. Brock points out that it gets dark early now. When they enter the living room, they are greeted by Pikachu's cheerful "Pika-Pi!" The tree then lights up, and it's revealed that the Pokémon are sitting in front of it, Pikachu holding the plugs to the lights and the music box to his cheeks.

Ash and company enjoy this scene, then Ash recommends that they start the party. They all give Merry Christmas calls to everyone, and the camera pans to the sky, where a sled being pulled by a Ponyta is seen. 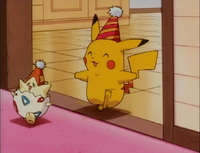 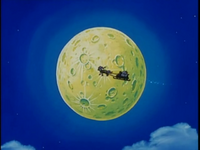 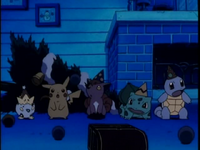 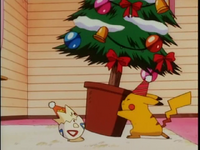 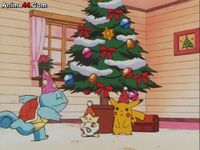 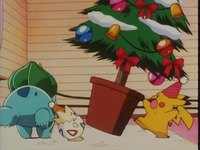 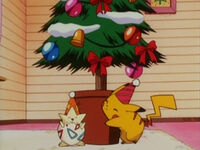 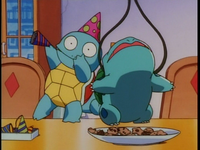 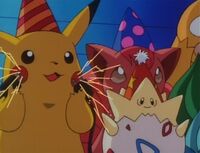 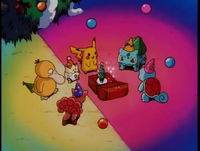 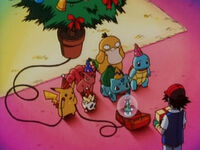 Retrieved from "https://christmas-specials.fandom.com/wiki/Christmas_Night_(Pokémon)?oldid=143200"
Community content is available under CC-BY-SA unless otherwise noted.