Mr. Men, Little Misses (a.k.a. Christmas Rescue) is a Christmas-themed short, based on the Mr. Men books by Roger Hargreaves, produced for ITV's TV-am block.

Mr. Clever and Little Miss Star host a show called The MisterLand Breakfast Chat. It's a news show where they tell about what's happening in MisterLand. They start talking about how exciting Christmas is. But then there was an emergency broadcast from Mr. Nosey. He said that MiseryLand was not excited about Christmas. Even worse was that the queen had a horrible plan to ruin Christmas. She told her knights that they had to go to The North Pole and steal presents at Father Christmas's workshop and tied up him, Mr. Snow, and the elves. So Mr. Impossible, Little Miss Magic, Mr. Rush, Mr. Strong and Mr. Busy had to go and save Christmas. Soon Miss Magic started to wave her wand and made everything run at double speed. Then the new batch of toys was finished. Then everybody was happy. 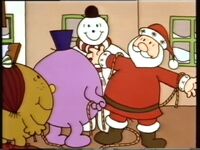 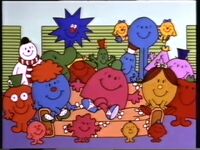 Retrieved from "https://christmas-specials.fandom.com/wiki/Christmas_Rescue?oldid=161182"
Community content is available under CC-BY-SA unless otherwise noted.