In Encino, California, the Narrator introduces the president of the SpongeBob SquarePants fan club, Patchy the Pirate, who is currently preparing for Christmas, and his "friend", Potty the Parrot. Patchy receives a fan letter from a person whose name and address are withheld, asking if SpongeBob likes Christmas as much as he does. Patchy explains that they didn't always celebrate Christmas in Bikini Bottom, and decides to show how they were introduced to it, beginning the episode proper.

SpongeBob is outside Sandy's treedome, planning a surprise karate attack on her. He bursts in and sees Sandy's Christmas tree, which she has just hooked up with lights, and mistakes it for a fire. After SpongeBob attempts to put out the "fire", Sandy asks if he's ever seen a Christmas tree before, and finds that he actually doesn't even know what Christmas is. She begins to describe the festive holiday to SpongeBob, who is very interested.

The next day, at the Krusty Krab, SpongeBob tells Mr. Krabs, Patrick and Squidward all about Christmas and everything that Sandy had said about it. He concludes by saying that if you write a letter to Santa Claus, he'll give you gifts on Christmas Day. Patrick and Mr. Krabs are very enthusiastic about the idea, while Squidward grumpily refuses. SpongeBob soon gets the entire city of Bikini Bottom interested in Christmas, and they all write letters to Santa. SpongeBob then builds a device that shoots the wish lists (placed inside bottles) to the surface of the ocean so Santa can get to them. Everyone then begins to decorate Bikini Bottom for Santa's arrival, much to Squidward's annoyance.

When Christmas Eve arrives, SpongeBob realizes that Squidward still hasn't written a letter. He goes to Squidward's house to try and write the letter for him, but is stopped by Squidward, who forces him to leave. SpongeBob tries to persuade him to write a letter, but Squidward refuses, saying he'll never believe in Santa Claus. As Squidward settles down to sleep for the night, SpongeBob, Patrick, and a bunch of other fish give up on persuading Squidward to believe in Santa, and they stand outside and eagerly wait for Santa's arrival while chanting "Santa's coming tonight, tonight" to the tune of "Jingle Bells".

On Christmas Day, the fish are still wearily chanting, and then realize that Santa never came. They all angrily leave, and even Patrick, after initially thinking Santa just stopped for a snack, eventually leaves as well, and SpongeBob is left with only a snowman keeping him company. Squidward wakes up happily and rushes outside to laugh in SpongeBob's face and make fun of him for ever believing in Santa. Sad and depressed, SpongeBob gives Squidward a present anyway - a wooden clarinet that he had made for Squidward the night before so he wouldn't feel left out when Santa came and gave everybody their presents. Squidward is so touched by his present and begins to feel like a huge jerk for laughing at SpongeBob, so he decides to do something in order to make it up to SpongeBob.

Squidward dresses up as Santa Claus and appears to SpongeBob, who is very happy to see that Santa came after all. However, Squidward's plan meets a snag when a large group of fish come happily, wanting gifts from him. Squidward quickly goes through his entire house and gives away all of his possessions until the fish are all gone and he has nothing left. Weary, Squidward asks if he's gone insane because of this when he suddenly finds a note at his doorstep and reads it. It is from the real Santa Claus, thanking Squidward for all of his work. The note then magically disappears as Squidward looks up to see Santa riding in his sleigh in the sky, laughing and shouting "Merry Christmas!" Squidward calls himself "insane" and then goes back inside his house, playing the wooden clarinet that SpongeBob gave him.

After the cartoon ends, Potty gives Patchy a little present - a nest of Christmas-themed eggs. Patchy then steps under a mistletoe, hoping to be kissed by a woman, only for Potty to start chasing after him. Seeing that Patchy is busy at the moment, the Narrator says "Goodnight, and Happy Holidays."

Paramount Home Entertainment released "Christmas Who?" on the SpongeBob SquarePants: Christmas VHS and DVD for the first time in 2003. Besides the special itself, the VHS also featured the episodes "Procrastination", "The Snowball Effect", and "Survival of the Idiots". The DVD contained all the episodes that were on the VHS, plus five more episodes - "Mermaid Man and Barnacle Boy IV", "Chocolate with Nuts", "As Seen on TV", "Pizza Delivery", and "Squeaky Boots" - as well as an audio commentary and the storyboards for the special itself. 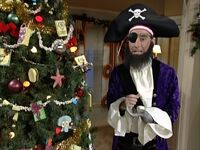 Patchy decides to tell the viewers about SpongeBob's first Christmas. 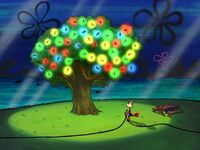 Sandy lights up her tree. 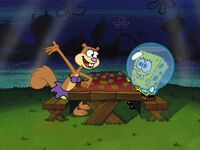 Sandy tells SpongeBob all about Christmas. 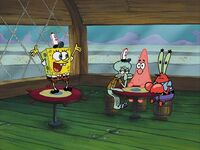 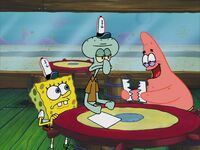 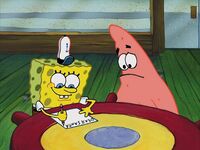 SpongeBob shows Patrick the proper way to write a letter to Santa. 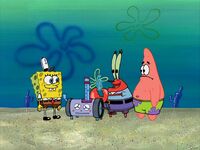 Mr. Krabs about to send his letter to Santa. 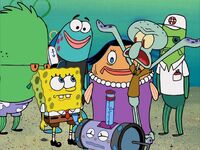 Squidward refuses to join in the festivities. 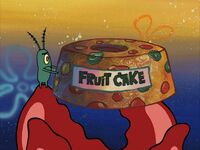 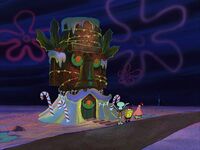 "SpongeBob, take this stuff down immediately!" 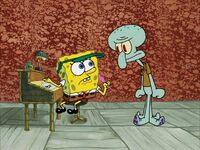 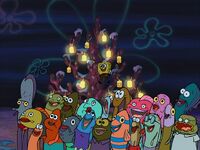 The Bikini Bottomites stay up caroling all night. 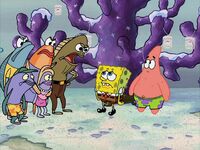 "Thanks for the lies, Mr. Fairy Tale!" 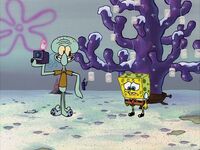 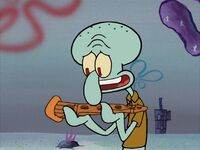 ...until he sees the gift SpongeBob made for him. 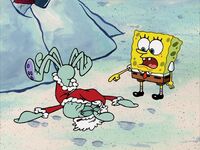 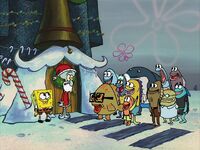 Everyone thinks Squidward is Santa. 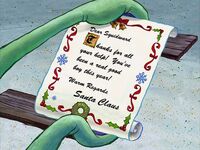 Squidward sees his message from Santa. 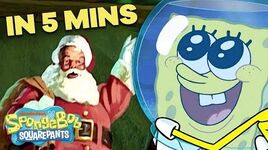 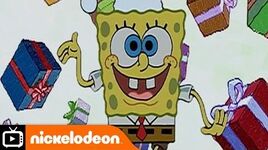