Christmas in Tattertown is a 1988 made-for-television animated Christmas-themed short, produced & directed by Ralph Bakshi, originally broadcast as a pilot for a supposed TV series for Nickelodeon on December 21, 1988.

A young girl named Debbie comes across a magic book that transports her (and her toys) into the realm of Tattertown, where everything you've ever lost winds up. While Debbie's stuffed dog remains loyal to her, Muffet turns against Debbie, intent on providing nasty surprises for her former master.

Since the residents of Tattertown are unfamiliar with Christmas, Debbie decides to show the true meaning of the holiday by gathering whatever Christmas junk she can find. This doesn't sit well with Muffet, who tries her best to ruin things and even attempts an air raid. When Debbie plays the original recording of Bing Crosby's "White Christmas", Muffet's henchmen are distracted by the song, and Muffet herself ends up landing in jail. 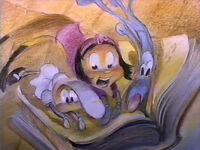 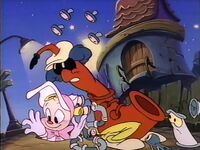 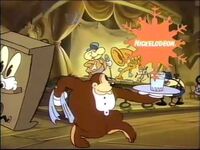 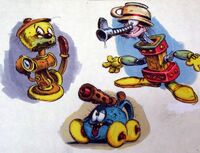 Retrieved from "https://christmas-specials.fandom.com/wiki/Christmas_in_Tattertown?oldid=161913"
Community content is available under CC-BY-SA unless otherwise noted.