Rugrats
"The Finster Who Stole Christmas"

Charles Crandall "Chuckie" Finster Jr. is one of the main characters from the Nickelodeon animated series Rugrats and its spin-off All Grown Up! He is a nerdy red-haired boy who is always afraid to take risks, but always ends up going along with the other Rugrats on their adventures. In the outcome, Chuckie often ends up being braver than he thinks, willing to do things like going down slides, using the toilet, or being a superhero. Chuckie is also Tommy Pickles' best friend; he looks up to him for advice.

In the first Rugrats Christmas episode, "The Santa Experience", Chuckie tells Tommy that he is convinced that Santa Claus is scary, an idea that Tommy finds ridiculous. Tommy decides to catch Santa on Christmas Eve in order to prove to Chuckie that he should not be scared of Santa. After arriving at the mountain cabin their families have rented for Christmas, Chuckie helps Tommy install traps in all the spots where Santa could enter - except, ironically, the chimney. Later, when Chuckie's dad, Chas, trying to play the role of Santa himself, comes down the chimney, the Rugrats, especially Chuckie, are initially frightened by his appearance, but Chuckie soon stops being scared when Chas removes his fake beard. The real Santa then shows up and gives presents to all the kids, and Chuckie sees that he is not really scary at all. After Santa leaves, we see that Chuckie received a teddy bear from Santa.

In the series' second Christmas episode, "Let It Snow", Chuckie and his friends mistakenly think that it is Christmas (due to Tommy's parents setting things up to take their Christmas card photo early), but they believe that Santa Claus is not bringing any gifts because it isn't snowing, so he and his friends try to make it snow.

In the series' third Christmas episode, "Babies in Toyland", Chuckie, along with the other Rugrats and their families, take a trip to the Christmasland park (designed by Tommy and Dil's father, Stu). After Angelica ends up causing the man hired to play Santa to quit, Chuckie and the other Rugrats venture across the park, believing that Santa left his presents for them at his workshop. When the Rugrats get caught in the middle of The Nutcracker animatronic show, Chuckie finds a giant walnut, which he later presents as a gift to baby Jesus in the Nativity display. Later, Angelica, having had a change of heart, gives Chuckie a new snowsuit.

Chuckie's most prominent role in a Christmas special came in the All Grown Up! holiday episode, "The Finster Who Stole Christmas". Early on, he laments about how his family has always had rather depressing Christmases, and decides maybe it it because his father Chas has never bought any good, expensive Christmas trees. He tries to get Chas to buy one, but he is not willing to spend over ten dollars for a tree. Chuckie then finds a seemingly unused Christmas tree thrown out onto the streets and brings it home, but it is not until after he has brought it home that he finds out the tree actually belonged to the Hillicki family, and that they are pretty upset about it being stolen. Throughout the episode, Chuckie feels immensely guilty about stealing the Hillickis' tree, to the point that he is afraid that God is upset with him about it. Eventually, on Christmas Eve, he, Tommy, Dil, Phil, and Lil secretly take the tree back to the Hillicki family residence. On Christmas morning, Chuckie finally confesses to his dad what happened, finally realizing that Christmas is truly all about family.

In addition, Chuckie made a few appearances in the Merry Nickmas interstitial shorts. His most prominent role in these was in "A Chuckie Finster Christmas, Channukah, Kwaanza, Winter Solstice", in which he, akin to Charlie Brown in A Charlie Brown Christmas, wants someone to explain to him what the titular holidays are about. He also appeared as one of the citizens of Toonville in "How the You-Know-Who Stole You-Know-What!" and can also be seen among the crowd of Nicktoon characters singing "The 12 Days of Nickmas". 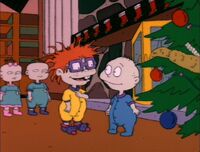 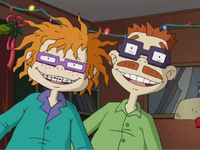 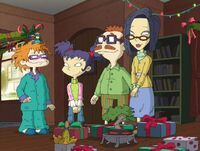 Retrieved from "https://christmas-specials.fandom.com/wiki/Chuckie_Finster?oldid=162159"
Community content is available under CC-BY-SA unless otherwise noted.