The Fairly OddParents
Cosmo Julius Cosma and Wanda Venus Fairywinkle-Cosma are Timmy Turner's fairy godparents in the Nickelodeon animated series The Fairly OddParents. Assigned to him due to the miserable life he was leading, they grant whatever he wishes for, often with errant results. As a result of one of Timmy's wishes, Cosmo and Wanda were later blessed with the birth of their own son, Poof, in the show's sixth season.

In the series' first Christmas episode, "Christmas Every Day!", Cosmo and Wanda grant Timmy's wish that it was Christmas every day, despite that they know he is making a big mistake in doing so. Eventually, Timmy finds out because of his wish, everyone in the world is now sick of Christmas, but Cosmo and Wanda are unable to reverse the effects of his wish. They explain to Timmy that all the fairies in Fairy World transfer their magic to Santa Claus every Christmas Eve, and they do not get it back until after Christmas is over. Cosmo and Wanda are then taken captive by the other holiday mascots (the Easter Bunny, Cupid, the April Fool, and Baby New Year), who intend to use what remains of their magic against Santa. Fortunately, Timmy, along with all the other kids in the world, manages to convince the holiday mascots not to destroy Santa, and after Santa finally brings a stop to the endless Christmas, Timmy reunites with Cosmo and Wanda. However, next Christmas, Cosmo and Wanda have to help Timmy and the other holiday mascots deliver everyone's Christmas presents while Santa and his wife take a vacation in Hawaii.

In "Merry Wishmas", Timmy gets Cosmo and Wanda (and Poof) to deliver magic coupons to everyone in Dimmsdale on the day after Christmas, under the alias of "the Magic Mailmen". Everyone uses the coupons to wish for something they did not receive for Christmas, to the point that their reaction to "Wishmas" eventually causes Santa Claus to give up on Christmas. Additionally, Cosmo and Wanda's boss, Jorgen Von Strangle, who likes the idea of Wishmas replacing Christmas, volunteers to become the new Magic Mailman, with Cosmo and Wanda as his sidekicks. On December 26th of the next year, Timmy manages to prevent Jorgen, Cosmo, and Wanda from delivering wish coupons again, and when everyone in the world is upset about not receiving wish coupons again, this encourages Santa to restore Christmas and go out giving presents to everyone again.

Cosmo and Wanda's last starring role in a Christmas production was the live-action film A Fairly Odd Christmas, which takes place approximately thirteen years after the events of the cartoon. As it is a sequel to the series' first live-action film, Cosmo, Wanda, and Poof have been allowed to stay with the now-grown-up Timmy and his girlfriend Tootie, thanks to a "Timmy Turner loophole" added to Da Rules, and they now use their magic to grant unfortunate people's wishes as part of the couple's Wishful Thinking business. The Christmas movie finds the fairy couple accompanying their now-23-year-old godchild to the North Pole when Santa needs to talk to him about the fact that Wishful Thinking is taking work away from him and his elves. Although Cosmo and Wanda admire Santa, it is revealed here that they do not get along well with the elves, particularly Christmas Carol and Dingle Dave, whom they have been feuding with for centuries. After Timmy accidentally injures Santa and has to embark on a quest to find Elmer the Elder Elf, Cosmo and Wanda accompany him, but are unable to use their magic due to the North Pole's systems also shutting down. Over the course of the journey, Cosmo and Wanda slowly, gradually start getting along better with Carol and Dave. After helping Timmy save Christmas, they eventually tell Dave and Carol that they did return the power drill they borrowed from them (which was the reason why they were feuding in the first place).

Between the two Christmas episodes of their show, Cosmo and Wanda also appeared prominently in the Merry Nickmas interstitial shorts. Their most notable appearance in these shorts is a segment in which they dance to The Nutcracker Suite, while munching on a nut and a cracker in tune with the music. They also take part in the song "The 12 Days of Nickmas", illustrating the lines "Eight oddball wishes" (one of which triggers the next line of the song, provided by the series' main villain Vicky) and "Two turtles' love." 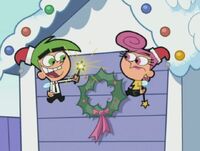 Cosmo and Wanda in "Merry Wishmas". 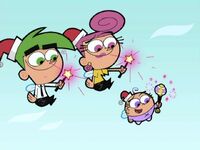 Cosmo and Wanda with their son Poof. 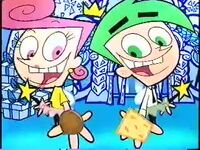 Cosmo, Wanda, and Poof at the end of A Fairly Odd Christmas.
Add a photo to this gallery

Retrieved from "https://christmas-specials.fandom.com/wiki/Cosmo_and_Wanda?oldid=170377"
Community content is available under CC-BY-SA unless otherwise noted.