Daddy's Home 2 (titled onscreen as Daddy's Home TWO) is a 2017 American Christmas comedy movie, starring Will Ferrell and Mark Wahlberg, directed by Sean Anders and written by Anders and John Morris, based on characters created by Brian Burns. It is a sequel to the non-Christmas film Daddy's Home. Unlike its predecessor, Red Granite Pictures was not involved in the film's production, as it presented by Paramount Pictures and produced by Farrell's Gary Shantez prodco.

Principal photography on the film began in Massachusetts in March 2017. It was released in the United States by Paramount Pictures on November 10, 2017, received generally unfavorable reviews and has grossed $60 million worldwide.

After finally becoming friends at the end of the first Daddy's Home film, Brad Whittaker and Dusty Mayron have a co-dad system where their two children, Megan and Dylan, take turns at each father's house. Dusty has also remarried, this time to Karen, a writer, and is stepdad to Adrianna, Karen's daughter.

Brad and his wife, Sara, along with Dusty and Karen, attend a school play for Megan, where she announces to the whole audience that she doesn't like the fact that she has to go back and forth to different houses all the time. Back at the house, after the play, Brad and Dusty decide to do away with having two separate Christmases and instead do one "together Christmas". As soon as Dusty announces the news to the kids, the phone rings. Dylan picks it up and announces it's Grandpa Kurt, Dusty's ex-astronaut, womanizing father. Kurt tells Dusty that he's coming for Christmas and is coming into the airport in the morning. Brad tells Dusty that his parents are also supposed to be coming for the holiday.

At the airport the next day, Dusty tells Brad that his father is going to make fun of them since he won't understand their co-dad arrangement. When Kurt arrives, he mistakes Brad for a chauffeur. When Dusty explains that Brad is the stepdad to his children, Kurt doesn't like it. Brad's overbearing and over-cheerful dad, Don arrives next and proceeds to hug and kiss Brad on the lips, showing that they have a loving, but very unusual father/son relationship. This further unnerves Kurt. Don tells Brad that his mother didn't come along, because she wasn't feeling well.

Back at the house, Megan and Dylan warmly embrace Don, since he is very present in their lives, while Kurt hasn't seen the children since they were toddlers. After seeing Brad and Dusty trying to figure out where to spend Christmas Day at, since they are purposing opening presents at Brad's house and eating Christmas dinner at Dusty's house, Kurt rents a large cabin through Airbnb, to house all of them through the holiday week. As Brad and Dusty pack the bags into the car, Dusty tells Brad that Kurt thinks the two men are harboring bad feelings for each other, but are just hiding it from everyone by pretending to be friends. When Kurt comes up, they change the subject. Seeing Dusty trying to get all of the suitcases into the trunk, Kurt tells Dusty that he's not going to be able to. Dusty tells Kurt that he is going to be able to. When Kurt walks away, Dusty does end up having trouble with getting all the bags in the car. To counter this, he takes one suitcase and throws it over a hedge, making room. At the cabin, Brad asks if anyone has seen his suitcase.

Throughout the week, Brad and Dusty's co-dad relationship is put to the test by Kurt's meddling. Meanwhile, Dusty tries to get close to his stepdaughter, Adrianna, but she doesn't like him and repeatedly tells him that he isn't her father. Sara also tries to bond with Karen but is taken aback by some of Karen's actions, like shoplifting clothes from a store.

Dylan also develops a crush on a little girl staying in the cabin next door. He gets made fun of it by Megan and Adrianna. Later, Dylan approaches Brad for advice on how to deal with girls. Brad tells Dylan that it would be better for Dylan to be that guy that his crush tells all her secrets to and that he should strive to be in the friend zone. Dusty and Kurt overhear this, and Dusty intervenes with his brand of advice. Dylan runs away, saying he would rather be in the friend zone with her.

Later, Brad, Dusty, Kurt, Don, Megan, and Dylan go searching for the perfect "Together Christmas tree." This leads to Brad, inadvertently, cutting down a cell phone tower with a chainsaw, electrocuting him and sending him flying through the air. Dusty ends up reviving Brad and bringing him back from the dead. Brad ends up being charged $20,000 for the destruction of the cell tower.

Brad ends up using the tower as a Christmas tree for the cabin. After lighting it up, Brad realizes that Don isn't there. He deduces that his father got separated while they were in the woods. Brad and Dusty go to find Don, which they do. They find Don, face down, being surrounded by a pack of grey wolves, which Dusty manages to scare away.

The next day, the family goes out to take the kids to see Santa. While there, Kurt convinces Dylan to ask Santa for a shotgun, which he does ask for. Brad and Sara tell Dylan that a shotgun for hunting means that a poor innocent animal will lose its life. This convinces Dylan to change his mind, but Megan instead decides she wants to go hunting. While out hunting the next day, Megan accidentally shoots Kurt in the shoulder, sending him to the hospital.

At the hospital, Dusty and Kurt begin to bond after they almost begin fighting when Kurt tries to leave the hospital. That night, Brad, Dusty, Don & Kurt go to an improv comedy club where the four men are relaxing and having a good time watching the show. Kurt gets up to go get another drink at the bar. Dusty sees Kurt picking up a woman at the bar and leaves with her. Brad enters Don into the improv show, and Dusty chooses a topic of a husband confronting his cheating wife as the subject of an improv skit. As the skit progresses, it is revealed that Don has separated from his wife (Brad's mother) in real life. Dusty tells Brad that he picked up on it through subtle hints that Don gave off throughout the movie. The audience believes that this is all part of the show, even when Brad tries to tell the audience that it is not.

The next day, Brad confronts Dusty. After Dusty reveals that he chose the infidelity subject for the improv game because he wanted to get back at Brad, because of how Brad has a good relationship with Don. Brad says he knows that is why Dusty chose that particular topic and to get back at Dusty; Brad has invited Adrianna's real dad, Roger, to the cabin for Christmas.

That evening, the entire family takes part in a Christmas manger representation. Brad gets into a fight with Dusty after Brad wants to play Joseph, which Dusty is currently playing. This breaks out in front of a crowd that is watching. Instead of Dusty fighting Brad, he almost comes to blows with Roger. Dusty makes a snowball and throws it at Roger, but accidentally hits Don instead. In retaliation, Brad makes an ice ball and threatens to throw it at Dusty, but chooses not to. Brad turns around and begins walking away. Don gets up as well and steps in front of Dusty, just as Brad changes his mind and throws the ice ball at Dusty, but Don, inadvertently, gets hit again. As Don gets back up and walks away, Roger throws a snowball he had in his hand away, which also coincidentally hits Don.

The next morning, Christmas Day, the families all pack up to leave. On their way out of town, the families are forced back to town on account of a blizzard. They are forced to take shelter at a movie theater. With every other movie being sold out, due to the huge influx of business from other families seeking shelter at the theater, both families go to see the last movie available: Missile Tow, a factitious Liam Neeson holiday action film.

When the power cuts off during the movie, the families go to the lobby where each man confronts their father about the secrets, lies, and attitudes. Don confronts Brad about not telling him the truth about his divorce, while Dusty tries to talk to Kurt. When Dylan sees the girl he has a crush on, is also there at the theater, he is teased again by Megan and Adrianna. After remembering some advice given to him by Kurt, Dylan walks toward her to kiss her. All of a sudden, he doesn't kiss her, but instead kisses Adrianna, his stepsister. Roger gets freaked out and attempts to leave with Adrianna, but is confronted by Dusty. He deduces that the reason why Adrianna hasn't warmed up to him is that he has never told her that he loves her, which he does. He also tells Roger that loving Adrianna means loving her real father as well since he is also part of the family. Roger almost leaves without Adrianna, but has a change of heart and decides to stay. Don and Brad also reconcile.

Sometime later, at the airport, Don and Kurt are preparing to leave to head back to their respective homes. Seeing how close that Don & Brad are and want that same kind of relationship with his son, Kurt kisses Dusty on the lips. Afterwards, Kurt heads with Don up the terminal escalators, where he reveals to Don that he switched out the tickets and they're going to spend New Years in Las Vegas.

As they prepare for Brad's mom and her new husband's flight to arrive, Dusty prepares Brad. When she does arrive, both men discover that Brad's new stepdad, Sully, is the pilot of the "Miracle on the Hudson" flight. Brad and Dusty remember that they watched the film Sully together not too long ago and Brad appears to be welcoming towards him. When Sully approaches him and asks if he is Brad, Brad says he is not (echoing what Dusty did to Brad in the first film). Brad runs down the terminal and says that Sully will never replace his father, because Sully has only one great personal story, whereas his father has thousands of stories. 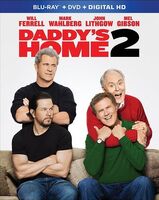 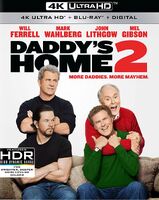 Retrieved from "https://christmas-specials.fandom.com/wiki/Daddy%27s_Home_2?oldid=188541"
Community content is available under CC-BY-SA unless otherwise noted.