"Dear Sis" is the second Christmas-themed episode of the television sitcom M*A*S*H, originally broadcast during its seventh season, on December 18, 1978.

At a sadly typical 10AM Sunday Mass (still a complete goose egg attendance-wise at 11:30), Father Mulcahy writes his sister Katherine, briefly lamenting her order's loss of a nun with a terrific hook shot in basketball. Recognizing that Christmas will be long past by the time Army mail delivers his message, Mulcahy can only speak of his present-day, which consists of trying to gain some Christmas cheer amidst pre-Christmas truce amping up of battles and the resulting wounded. Mulcahy is feeling less than effective, which is accentuated in OR when a soldier frightened of being sedated grabs him in a headlock. While the Padre believes he is talking the soldier down, he is in fact serving as a distraction so that Margaret can sedate him without his knowledge. Collecting for Sister Theresa's orphanage is a mixed bag; Potter, Pierce and Hunnicutt give from the heart, but Winchester snarkily turns the request down, even proclaiming the cruelty of raising the hopes of children who have nothing. Radar hurriedly grabs the Padre, wishing a blessing for his mother's pregnant cow; but even this small purpose is usurped when the cow delivers breach, causing Radar to turn to the incredulous Winchester to aid his mother's efforts to save the newborn calf.

Feeling his usefulness at an ebb, Mulcahy plays barkeep at the Officers' Club, only to find himself in a tug of war between Margaret and Klinger, both depressed and seeking comfort as their exes weigh upon their attempts at holiday cheer--amidst not a few glasses of booze. During yet another rush of wounded, Mulcahy is called away from his one sure duty--giving last rites to the dying--to help Margaret calm a wounded soldier who briskly demands a doctor's immediate attention. When the soldier lashes out at the pair, Mulcahy responds instinctively to the assault and punches the man in the face. Instantly horrified by what he did, the Padre finds only taunts and sneers as he tries to apologize to the soldier. Outside Post-Op, Hawkeye finds himself comforting the chaplain and urging him to forgive himself, also empathizing for his feelings of uselessness, citing it as a miracle that the perpetual ugliness of what they face daily hasn't destroyed them all.

As the big day approaches, Potter finds himself toasting another promise of homefront Christmas falling by the wayside and trying his best to break his senior staff out of what Hawkeye calls a "good-old fashioned Christmas depression". In the mess tent, they all begin to feel some small joy; B.J. as Santa (failing to hide his beloved moustache under the white beard) brings a bag of presents to be exchanged. Radar is the subject of friendly jibes when it is learned Potter gave him his grandson's old pajamas for Radar's teddy bear. As gifts are opened, Radar guides a reluctant Winchester to a gift marked off for the Major; it turns out to be Winchester's own toboggan cap, sent by his mother at Radar's request and at the Padre's suggestion. An exultant overjoyed Winchester immediately pries open his wallet and his heart at this reminder of better times and happier places. He still manages however, to pay the Padre a somewhat mixed compliment.

Hawkeye assembles the room in a heartfelt toast to Father Mulcahy, and makes a slight apology for not showing up on Sundays, before leading the room in a chorus of "Dona Nobis Pascem" ("Give Us Peace"). A light snow outside actually lends the dingy camp a touch of Christmas cheer. An ambulance bearing victims of a broken Christmas truce promptly shows itself, prompting the staff to duty, and at their side is a simple man of God who now knows he is trying his best, which is all anyone can ever do. 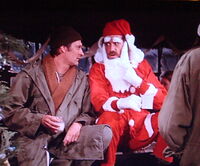 Add a photo to this gallery
Retrieved from "https://christmas-specials.fandom.com/wiki/Dear_Sis?oldid=112313"
Community content is available under CC-BY-SA unless otherwise noted.