"Digimon World Tour, Part 2" (サンゴとベルサイユ大乱戦！, Coral and Versailles, The Rebel Fight!?) is the episode of the anime series Digimon Adventure 02.

Joe and Cody arrive in Australia. They find a Control Spire not too far from the shore and they and their partners attempt to bring it down. "Santa Claus" arrives wearing swim wear and helps them out. After successfully bringing down the Control Spire, they greet each other "Merry Christmas". Santa Claus then reveals himself to be Gennai's Australian counterpart, Hogan. Hogans tells them that the Australian DigiDestined are gathering the Digimon at the Great Barrier Reef where another Control Spire is located. They then hear a call for help and see a boy with a Crabmon on a surfboard being chased by a Gesomon, a Shellmon and an Ebidramon. The boy makes it to shore and introduces himself as Derek. In order to fend off the three hostile Digimon, Joe and Cody have Armadillomon and Ikkakumon threaten to turn the three Digimon into "Digimon Seafood". With one more threat from Crabmon, the three Digimon flee. Ikkakumon, Armadillomon and Crabmon chase them and Joe, Cody, Derek and Hogan follow them on a boat.

Meanwhile in Paris, France, Tai and TK meet up with T.K.'s grandfather, Michel. As they ride on Michel's motorcycle with a side cart, they come across Versailles Palace and are surprised to see that the lights are still on. Although, Tai and T.K. are hesitant to enter, calling it trespassing, Michel insists that they are doing that right thing by investigating.

Inside, they see a Mamemon, a BigMamemon and a MetalMamemon having a party. The three Digimon call themselves "The Mamemon Brothers". This outrages Michel. After closer inspection, they find a female DigiDestined and her partner Digimon—a Floramon—-- being held prisoner by the Digimon. This further angers Michel. Tai and T.K develop a crush on the DigiDestined while Agumon and Patamon develop a crush on the DigiDestined's partner Digimon. Michel confronts the three Digimon and attempts to rescue the captive DigiDestined. The DigiDestined is impressed with Michel's chivalry. However, Michel has a pie thrown at his face. Tai and T.K. try to help but also have pies thrown at their faces. Agumon and Patamon digivolve to their champion levels and battle the three Mamemon outside the Versailles Palace, causing a part of the wall to be destroyed in the process. Tai, T.K., and Michel introduce themselves to the DigiDestined. The DigiDestined introduces herself as Catherine.

She explains to them that earlier she and Floramon found a Control Spire near the Seine River and attempted to destroy it. However, she and Floramon were stopped and captured by a Giromon. The said Giromon arrives and along with the Mamemon Brothers and fight Greymon and Angemon. Greymon and Angemon digivolve into MetalGreymon and MagnaAngemon, Catherine has her Floramon digivolve into Kiwimon and assists MetalGreymon and MagnaAngemon battle Giromon and the Mamemon Brothers. The opposing Digimon are defeated and fall down from the sky to the Seine River. MagnaAngemon destroys the Control Spire.

The French DigiDestined arrive shortly with the Digimon loose around France. With the day finally Christmas, they greet Catherine, Tai, T.K. and Michel "Merry Christmas". Catherine greets them back. Tai and T.K, as either a Christmas greeting or to show their mutual crush on her, kiss her on her cheeks at the same time. Michel immediately follows by kneeling down, taking Catherine's hand and kissing it.

Meanwhile back in Japan, Noriko Kawada is with her two unnamed friends. They are concerned with her health and tell her to go home. They bid Noriko good-bye and walk off. As Noriko was about to follow their advice, she sees Arukenimon and follows her to an alley. 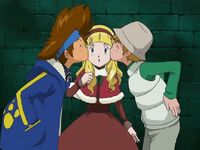 Retrieved from "https://christmas-specials.fandom.com/wiki/Digimon_World_Tour,_Part_2?oldid=147730"
Community content is available under CC-BY-SA unless otherwise noted.