DreamWorks Dragons: Gift of the Night Fury is a winter holiday-themed computer-animated short film based on DreamWorks How to Train Your Dragon franchise. It debuted on DVD and Blu-ray on November 15, 2011, along with their another animated short, Book of Dragons.

Hiccup is promptly woken by Toothless jumping on the roof, making sure to grab his helmet and head out flying with his friend (almost slipping on some ice along the way but quickly caught by Toothless). They practice a trick they've been working on for some time during their flight and finally pull it off, as the other villagers are putting up Snoggletog decorations with the help of the dragons. While Stoick proclaims how this'll be a wonderful Snoggletog, all the dragons in the village to hear a distant roar; the villagers witness flocks of dragons flying high past Berk. One of the village dragons makes a similar roar, at which all of Berk's dragons also take off, to the shock and confusion of the Vikings. Hiccup and Toothless are just coming back from their ride, when they fly straight into the storm of oncoming dragons, knocking off Hiccup's helmet into the ocean. Although Toothless attempts to get the helmet back, Hiccup decides it's best to return home to figure out what is going on.

After landing, Hiccup is immediately bombarded with questions about where the dragons have gone, but he has no idea. Stoick calls everyone to the Great Hall to discuss further plans and Hiccup and his friends walk outside. Astrid tries to keep up the Snoggletog cheer, Tuffnut remarking how it must be nice for Hiccup to have a dragon that can't go anywhere without the rider. Hiccup looks at Toothless staring sadly out to sea on a cliff.

The next morning, Astrid has come up with a new drink called "yak nog" (a version of eggnog), which she hopes to become a new Snoggletog tradition. Snotlout, trying to get on her good side, decides to try some and silently regrets it, especially since he has to swallow it instead of spitting it out in front of Astrid. Fishlegs is at first eager to try some, but awkwardly declines after Snotlout shakes his head behind Astrid's back, warning him that the concoction is not fit for human consumption. The twins refuse based on the smell alone, so she decides to go see Hiccup. At Gobber's smithy, Hiccup is building something for Toothless. He came to agree with what Tuffnut had said, as Toothless not being able to fly like other dragons was not fair to him. Therefore after working all night, he has come up with a new tail which would allow him to fly by himself. Astrid is impressed, but wonders out loud for briefest of moments if the Night Fury would never return, then rejects the notion. After spitting out the yak nog he accepted from Astrid, her words are clearly in the back of his mind, but Hiccup takes a calming breath and takes the automatic tail to put it on Toothless. After he succeeds, Toothless does not like the feeling of the new contraption and tries to fling it off; when he extends his tail fin on reflex, he stops in surprise when the auto tail also opens and realizes what it's for. After looking at Hiccup for a few moments though, Toothless takes off, leaving Hiccup saddened at his sudden departure.

Three days later, Hiccup gets up, hearing a thumping noise on the roof. Thinking it was Toothless, and falling on the patch of ice again, it turns out that the noise was Stoick putting up decorations. Stoick reassures his son that Toothless is probably with the other dragons, and since he couldn't find Hiccup's helmet, he reminds him to get it as that's where Odin puts their presents.

Hiccup walks along with a pair of oars on his shoulder, intending to row out and fish his helmet out of the sea when he bumps into Fishlegs coming up from the docks, who's been acting pretty suspicious the past few days. Observing him carrying a basket full of fish, Hiccup remarks it's enough to feed a dragon. Upon Fishlegs' nervous reaction, he follows Fishlegs to a barn where Fishlegs' Gronckle, Meatlug, is chained up to prevent him from leaving. As soon as Hiccup opens the doors, he immediately flies out, snapping the chain and taking Hiccup along with him to parts unknown. Fishlegs and Astrid see Hiccup fly away, and head into the shack where Meatlug was being held captive with the twins and Snotlout. As Astrid yells at Fishlegs for basically kidnapping his own dragon, Tuffnut notices some objects obscured in a pile of straw. To their surprise, they find out that Meatlug had laid eggs, making "he" into a "she." Astrid realizes that the dragons likely took off for the same reason, to lay their eggs. She then has the idea to wrap up the eggs with ribbon and put them in the other Vikings' homes as gifts for another Snoggletog tradition.

Hiccup eventually is taken to an island full of their dragons, quickly realizing they come here to lay their eggs. A Gronckle is seen to push her eggs into water, hatching into little baby Gronckles with a light explosion, safely dampened by the water. Hiccup notices a missed one, which promptly explodes in his face when he bends down to get it, knocking him back. He comments that it's a good thing those don't hatch in Berk, information the blissfully unaware Astrid could of used back home. The teens have just finished placing the last eggs and are talking about how this was a great idea, until one of the eggs explode and its occupant is propelled at high speed into Fishlegs' face. It doesn't take long until every other egg starts hatching and setting fire to some houses, and the big wooden Snoggletog tree. Noticing the teens standing there, Stoick demands an explanation.

Hiccup looks around the island for a bit and finds Stormfly (Astrid's Deadly Nadder), Hookfang (Snotlout's Monstrous Nightmare), and their own babies. Determining that he ought to go home for Snoggletog, he persuades Hookfang for a ride as the other dragons start following with their hatchlings in tow despite Hiccup's protests not to, inadvertenly starting the return migration. The hatchlings manage to fly for a moment, but being so small, the wind blows them back to the island. After a few seconds of thinking, Hiccup remembers something from when he flew to the island and gets an idea about what to do.

In Berk, repairs are being made. Stoick rants about how this is a horrible Snoggletog until everyone stops working, staring off into the distance. They see a huge cloud of dragons with Hiccup, carrying an old Viking ship with ropes that Hiccup saw on the way there. The ship carries all of the dragons' hatchlings, allowing them to safely return home. Everyone congratulates Hiccup on a job well done, and reunite with their respective dragons. Soon, they are all celebrating in the Great Hall on Stoick's statement of the fact that they finally have something to celebrate considering this year's rotten luck at Snoggletog.

Hiccup looks around, smiling at the returned dragons and the babies, but is still without Toothless himself. Astrid comes and sympathetically congratulates him as well, giving him a quick kiss and a hug. He asks her about Toothless just as she sees the Night Fury pushing his way past the door of the hall behind Hiccup. Astrid starts teasing him about how she wouldn't want be him at the moment, seeing as how he's brought back everyone's dragon, except for his. Hiccup replies sarcastically, until Astrid excitedly turns him around to see Toothless, who he promptly runs up to and hugs. He scolds the dragon for a moment (who gets distracted by Hiccup wagging his finger) until he notices something in Toothless' mouth. Toothless plops the object onto his head, getting Hiccup wet with drool, but revealing that he managed to find the Viking's lost helmet: he had been worrying about the helmet and the auto tail had given him the freedom to look for it the entire time he was gone. Hiccup gives him another hug in gratitude as Astrid exclaims, "Happy Snoggletog!"

The next morning, similar to the opening except for the fact that he has apparently decided that his helmet is better left at home, Hiccup wakes to find Toothless has placed his old tail and saddle out in front of him in the snow. Hiccup starts saying how Toothless has a new and better tail now, but instead of simply letting Hiccup get up on his back, Toothless keeps persisting. Eventually, the dragon looks back at his new tail and starts smashing it into the ground, ignoring Hiccup's protests as he flicks it far away behind him. Toothless picks up and places the saddle on the snow in front of Hiccup and nudges it towards him, eyes round with request. Realizing that Toothless would rather fly with him, as opposed to just carrying him like all the other dragons, Hiccup is all too happy to go out for another flight. The two of them perform another daring trick.

The original Blu-ray and DVD of the special was released on November 15, 2011. Later, the special was featured alongside the Shrek and Madagascar Christmas specials on the DreamWorks Holiday Collection compilation Blu-ray combo pack and DVD, released in 2012. The original DVD was reissued on October 1, 2013. Under the ownership of NBCUniversal (following their 2016 acquisition of DreamWorks Animation), the DVD was reissued again in a Holiday Double DVD Pack pairing it up with the original How to Train Your Dragon film on October 2, 2018. Later, to promote How to Train Your Dragon: The Hidden World, the special was also included in the How to Train Your Dragon: The Short Film Collection DVD in early 2019. Its next release was on the DreamWorks Ultimate Holiday Collection Blu-ray and DVD sets, released on October 15, 2019. 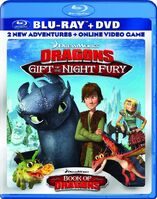 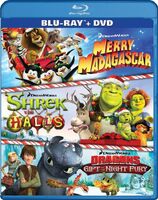 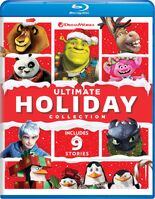 Retrieved from "https://christmas-specials.fandom.com/wiki/Dragons:_Gift_of_the_Night_Fury?oldid=181697"
Community content is available under CC-BY-SA unless otherwise noted.