Christmas Specials Wiki
Register
Don't have an account?
Sign In
Advertisement
in: Specials, 2014 releases, Originally aired on NBC,
and 8 more

Elf: Buddy's Musical Christmas is a stop-motion animated musical television special, based on the 2003 Jon Faveru-directed film Elf and the 2010 Broadway musical of the same name, produced for NBC by Warner Bros. Animation and premiered on December 16, 2014 at 8:00 PM ET. It stars Jim Parsons as Buddy.

Santa narrates the story of Buddy's travels to New York City to meet his father. Along the way, his unrelenting cheer transforms the lives of everyone he meets and opens his father's eyes to the magic of the holiday.

The special was released on DVD and Blu-ray on November 3, 2015. The DVD was also released in a 2-pack with the original film, and in the 2017 Jolly Holiday Collection box set (alongside The Year Without a Santa Claus and A Miser Brothers' Christmas). 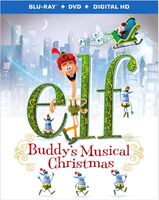 Differences from the original movie