Elf is an American Christmas comedy film directed by Jon Favreau and starring Will Ferrell and James Caan. It was released in the United States on November 7, 2003 and grossed over $220 million worldwide.

On Christmas Eve one night, while Santa Claus is delivering toys to an orphanage, a baby crawls into his sack of toys after catching sight of a teddy bear and is unwittingly taken back to the North Pole, where he is named Buddy because on the tag on his diaper reading "Little Buddy Diapers." Over the next three decades, Papa Elf raises Buddy as an elf worker, but his enormous size and poor toy-making abilities prove to be a hassle to the other elves. After Buddy overhears two elves discussing him being a human, he goes to Papa for the truth. He tells Buddy that he was born to Walter Hobbs and Susan Wells, but Walter never knew that he was given up for adoption. He also reveals that Susan later died and that Walter now works at a children's book company in New York City. Buddy learns about New York from a jolly snowman named Leon. Although Santa tells Buddy that Walter is on the naughty list because he is greedy and selfish, he sets out on a long journey to find his father anyway.

Upon arriving in New York City, Buddy displays his ignorance in several ways: he runs into a guy who looks like Santa, crosses the street at the wrong time, chews discarded gum on a subway station's handrails (despite Santa earlier telling him not to do so), and takes a derelict coffee shop's claim to have the "world's best cup of coffee" literally.

Eventually, he finds Walter in the Empire State Building and Walter initially lets Buddy into his office, thinking he has a Christmas-gram for him. But when Buddy says that he is his son and mentions Susan, an incredulous Walter has security eject him from the building and they sarcastically tell Buddy to "get back to Gimbel's". He does so and the manager mistakes him for an employee at the store's Santa Land, where he meets the lovely, but unenthusiastic, Jovie. After hearing that Santa will be arriving the next morning, Buddy stays after-hours and redecorates Santa Land using expensive merchandise from around the store and also buys Walter a sensual nightie because it is advertised as being "for that special someone".

The morning comes and, despite the redecorated Santa Land proving to be a hit with families, Buddy is appalled that the department store Santa is not the genuine article. After Buddy rips off his fake beard to expose him as an impostor in front of the children (thus unintentionally breaking their spirits), a brawl breaks out between them that causes much destruction to Santa Land as the manager arrived (much to his horror). Buddy (and presumably, the man in the Santa suit) is then arrested, sentenced to 24 hours in jail, and given a restraining order, which effectively bans him from entering the store. After hearing about Buddy's imprisonment, Walter reluctantly bails him out and takes him to the family's doctor for a DNA test, which confirms that Buddy is in fact Walter's biological son.

The doctor falsely deduces that Buddy's behavior may be because he was never fully nurtured at birth and is returning to a position of child-like dependency, and convinces Walter to take him home to meet his stepmother, Emily, and half-brother, Michael. Despite Emily being overjoyed that Walter has another son, both Walter and Michael are put off by Buddy's immature behavior (such as slathering his spaghetti in M&M's and maple syrup, and not understanding that neither of them are interested in playing with him), but Emily insists that Buddy stay with them until he "recovers".

The next day, Walter is berated by his boss, Fulton Greenway, for publishing The Puppy and the Pigeon with two pages missing as he believed a reprint would be too expensive. He also learns that the company is in financial trouble not only because the book is incomplete, but that it as a whole sucks. To Walter's chagrin, Greenway schedules a book pitch for Christmas Eve, and Walter's associates, Eugene and Morris, suggest they hire temperamental best-selling writer Miles Finch to help them with the pitch. Meanwhile, Buddy befriends Michael after helping him defeat a gang of bullies in a snowball fight and Michael encourages him to ask Jovie out.

The next day, Walter reluctantly takes Buddy to work with him after being encouraged by Emily and sends him down to the mail room so he will not cause any trouble. Unfortunately, he accidentally becomes drunk after mistaking a coworker's whiskey for syrup and throws an outrageous dance party that interrupts a phone conversation between Walter, his associates, and Finch. On Christmas Eve, Buddy goes on his date with Jovie and wins her over with his child-like enthusiasm.

Finch eventually arrives at the office and attempts to pitch a book idea to Walter and his associates, until Buddy bursts into the conference room to tell Walter about his newfound love. Buddy then notices Finch and mistakes him for an elf due to his dwarfism. Finch tries to hold his temper as Buddy asks him questions about how managed to leave the North Pole, until he finally loses it and pummels Buddy in a fight after the latter calls him an "angry elf". Despite Walter attempting to explain Buddy's mistake, an angry and insulted Finch refuses to sign a deal with the company and storms off. Furious that his chance of saving the company has been ruined as well as being at the end of his rope with Buddy's behavior, Walter sternly castigates Buddy and tells him to leave.

Depressed, Buddy returns home and writes a message on an Etch-a-Sketch apologizing for ruining Walter's life as well as "cramming eleven cookies into the VCR" before running away. Back at the office, Walter feels extremely guilty for upsetting Buddy and has given up hope on saving his job until Eugene and Morris reveal that they found a notebook Finch left behind in the conference room. Discovering it is filled with pitches for children's literature, Walter tells them to prepare a storyboard in time for Greenway's arrival.

Meanwhile, Michael sees Buddy's message and bursts in on Walter's meeting with Greenway to frantically tell him that Buddy is gone. After being convinced to put his family above his job for the first time, Walter asks Greenway to reschedule. Ge refuses and threatens to fire Walter if he doesn't finish the book pitch, but Walter leaves anyway after telling him "up yours." True to his word, Greenway fires Walter.

While walking through the streets, Buddy sees Santa's sleigh crash into Central Park, which attracts a large crowd (as well as television reporters and the Central Park Rangers). He finds Santa, who explains that he lost the sleigh's engine and that the last bit of Christmas spirit on the Claus-o-meter (which had powered the sleigh previously) is gone. He convinces Buddy to help him fix the sleigh. Walter and Michael find Buddy as he locates the sleigh's engine. Walter apologizes to him for yelling at him and saying he did not mean it and Buddy forgives him. He then takes them to meet Santa, who reveals to Michael that belief in him (manifested in knowing that he is bringing people what they want for Christmas) can make his sleigh fly. Therefore, Michael steals his list and reads it in front of the television cameras now gathered outside the park, so that people all over New York City believe conclusively in him. The Central Park Rangers begin to chase his sleigh while Buddy is still trying to reattach its engine and it is at one point lost.

However, Jovie, who saw the events on television and was among the crowd, remembers what Buddy told her earlier about how singing is the best way to spread Christmas cheer. She manages to overcome her shyness and leads the crowd into singing "Santa Claus is Coming to Town", which restores power to the sleigh. However, it isn't enough to make it fly and this is because Walter was caught by Michael mouthing the words. Walter is convinced to start singing, which fully powers the sleigh and the crowd watches in amazement as it takes to the sky.

By next Christmas, Walter has started his own publishing company with its first book released - Elf, an account of Buddy's adventures. Buddy and Jovie get married and have a daughter named Susie, named after Susan. The film ends with them visiting Papa Elf at the North Pole.

Varese Sarabande
In 2021, Varese Sarabande released a Deluxe Edition album, limited to 2000 copies. It collected John Debney's full score for the film, including the alternate and edited tracks from the 2003 album release. 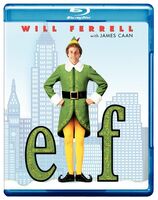 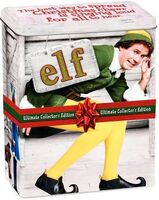 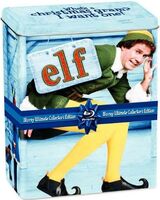 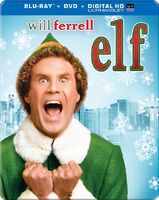 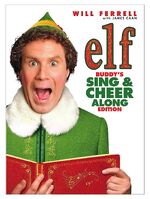 ﻿On November 14, 2010, a stage musical version of the film opened at the Al Hirschfeld Theatre on Broadway. It was directed by Casey Nicholaw, with music by Matthew Sklar, lyrics by Chad Beguelin, and a book by Bob Martin and Thomas Meehan. The cast included Sebastian Arcelus as Buddy, Amy Spanger as Jovie, Beth Leavel as Emily, Mark Jacoby as Walter, Matthew Gumley as Michael, Valerie Wright as Deb, Michael McCormick as Mr. Greenway, Michael Mandell as the store manager, and George Wendt as Santa. It ran through to January 2, 2011.