Emmet Otter's Jug-Band Christmas is a one-hour Christmas television special produced by the Jim Henson Company, based on the 1971 children's storybook of the same name by Russell Hoban. It first aired on the CBC on December 4, 1977[1][2] and then on HBO on December 17th the following year, before making its first network television broadcast on ABC on December 15, 1980. It has since re-aired on Nickelodeon in the 1990s, then on the Odyssey Network in 1999, and most recently aired as part of ABC Family's 25 Days of Christmas in 2015.

In this one-hour musical Christmas special, Kermit the Frog tells the story of widow Alice "Ma" Otter and her son, Emmet, who live along the river in the village of Frogtown Hollow. Ma and Emmet struggle to make ends meet through odd jobs and projects for neighbors and villagers, but this Christmas they dream of having enough money to buy each other a special gift. Known for their musical abilities, the Otters are encouraged by their friends to enter a local talent contest. The mother and son reminisce about Pa Otter, who serves as the inspiration for them to enter the show.

Without each other's knowledge, Ma and Emmet prepare for the talent contest in the hope of winning the fifty-dollar prize to buy Christmas gifts for each other. To do so, Ma hocks Emmet's tools for dress fabric. Meanwhile, Emmet turns Ma's washtub into a bass and assembles Wendell Badger, Harvey Beaver, and Charlie Muskrat into a jug band called the Frogtown Hollow Jubilee Hug Band.

At the contest, Emmet and the Frogtown Jubilee Jug Band perform a quickly-written song titled "Brothers" (due to another contestant, Yancey Woodchuck, performing the song they themselves had originally planned to sing, "Barbecue"), and Ma Otter sings a solo number, "Our World". Unfortunately, they both lose to a hard rock group formed by a unruly gang of woodland creatures who call themselves the Riverbottom Nightmare Band. On the way home, Emmet and his jug band perform "Brothers" together with "Our World" after Ma realizes how well the two songs fit together. They are overheard by one of the contest's judges, Doc Bullfrog, who happens to own a local restaurant called the Riverside Rest, and he offers them a job as musical performers at his restaurant.

The songs for Emmet Otter's Jug-Band Christmas were written by Paul Williams, who is known for his 1970s pop hits "(Just an) Old-Fashioned Love Song" and "We've Only Just Begun." Williams would later write songs for the Muppets in three later productions, The Muppet Movie (1979), The Muppet Christmas Carol (1992), and A Muppets Christmas: Letters to Santa (2008).

A soundtrack album of the special was released by Varese Sarabonde Records on November 2, 2018, containing the above-listed songs as well as select instrumental tracks from the special's score.

The special utilized a number of different puppetry methods. The main puppets used were the usual Muppet hand puppets, but the characters were frequently represented by marionettes as well. It also utilized the Bunraku and Black Theater techniques. This was also one of the first Muppet productions to use radio control puppet effects, designed by Faz Fazakas.

John J. O'Connor gave the special a very positive review in The New York Times on December 15, 1980 for its ABC airing:

In 1981, the special was nominated for the Primetime Emmy Award for Outstanding Children's Program. However, it lost to Donahue and Kids.

In 2008, the special was adapted into a live musical stage show, featuring a mix of live actors and stage puppets built by the Jim Henson Company. Paul Williams wrote four new songs just for the stage adaptation, as well as finishing up "Born in a Trunk", a song he originally wrote for the television special. The musical premiered at the Goodspeed Opera House on December 7, 2008, and ran until January 4, 2009. The show ran again, this time with the title shortened to Jim Henson's Emmet Otter, from December 5, 2009, to January 3, 2010.

In 1983, Emmet Otter's Jug-Band Christmas made its home video debut as one of four Muppet Home Video titles (alongside Hey Cinderella!, The Frog Prince, and The Muppet Musicians of Bremen) that were released on VHS and Betamax under the heading "Tales from Muppetland", by Silver Eagle Records. The four specials were also released in two volumes on RCA SelectaVision CED discs; Emmet Otter shared its CED disc with The Muppet Musicians of Bremen.

1983 also saw the release of the four specials in the UK by RCA/Columbia Pictures Video (the forerunner to Columbia Tristar Home Video), again under the Muppet Home Video banner. There were two volumes, each containing two programmes. Emmet Otter's Jug-Band Christmas was featured on the first volume with Hey Cinderella! These programmes appear to be the same versions as released by Silver Eagle Records in the US.

A 40th Anniversary Edition DVD was released by Sony Pictures Home Entertainment on October 10, 2017; it reinstated some of the bonus features from the 2005 DVD and was also the first DVD release of the special to include Kermit's scenes intact. However, like the 2015 ABC Family broadcast, it was cropped to 1.78:1 widescreen.

In December 2018, the special was paired with the Fraggle Rock episode "The Bells of Fraggle Rock" for a series of theatrical screenings by Fathom Events. This was followed up by a Blu-ray release on December 18th, which included the special in both its original aspect ratio as well as the 2017 DVD's widescreen presentation. The disc included the same bonus features as the 40th Anniversary Edition DVD plus a new retrospective featurette titled "Memories of the Jug-Band", which had also appeared with the Fathom Events screenings. 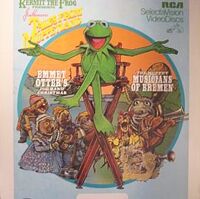 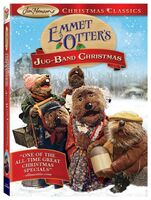 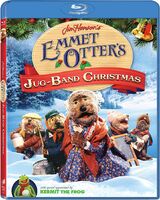 Various edits have been made to later broadcasts and releases of Emmet Otter's Jug-Band Christmas to accommodate for various time constraints. Additionally, after the Jim Henson Company sold the Muppet characters to the Walt Disney Company in 2004, subsequent releases had to cut out all of Kermit's scenes. The original uncut special is available for viewing at the Paley Center. Aside from the original version, four alternate cuts to the special exist.

Mayor Fox: Welcome if you will, George and Mellisa Rabbit!
[Rabbits dance]
Possum: Well, It's gonna be a long night.

Ma: Nice, I should say it did Emmet. Why you can hear the fish applauding.
Emmet: I think you're right. Maybe I should pass the hat.
Ma: Pa used to say, "If you pass the hat to fish, all you get is a wet hat!"
[Both laugh]
Ma: Still, I suppose the fish have just about as much money as any of us this year.
Emmet: Couldn't have much less.
[Emmet starts rowing]
Emmet: Ma, what are we gonna do about Christmas this year?

Ma: Oh, "There Ain't No Hole in the Washtub!" That's what you call your basic 'keeping-warm-while-you're-rowing-home' kinda song.
Emmet: I'm rowin', where's the singing?

The Collector's Edition DVD released by HIT Entertainment in 2005 contained yet another variation of the special. This version is closer to the original 1977 version, except that all the scenes with Kermit were cut entirely, due to the character now being owned by Disney. However, the alternate scenes from the previous two edits were included in the "Deleted/Altered Scenes" reel bonus feature. This version of the special was used for the subsequent DVD and digital releases.

When the special was aired on ABC Family's 25 Days of Christmas in 2015, it was presented in widescreen and at a 30-frame-rate speed rather than the original 60-frame-rate. It was notably the first broadcast of the special since 2004 to include Kermit's scenes at the beginning and end, though other alterations were also made for time:

The above-listed scenes, along with Kermit's appearances, were reinstated in the special's 2017 DVD and 2018 Blu-ray releases, thus bringing them the closest to the original 1977 version. However, only the Blu-ray release includes this version in its original aspect ratio; the DVD only includes it in cropped widescreen. 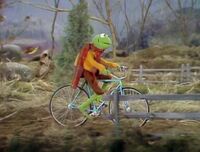 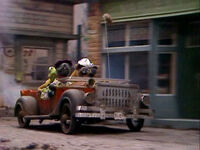 The Riverbottom Gang driving through Waterville. 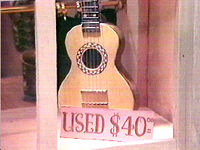 A guitar with mother-of-pearl inlays 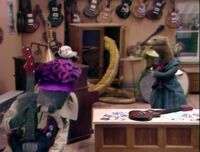 "I can't believe what's happening here in my store!" 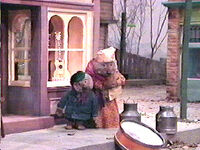 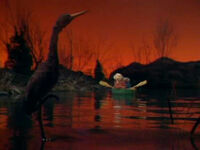 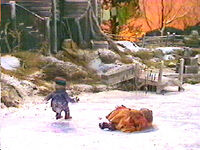 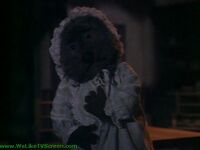 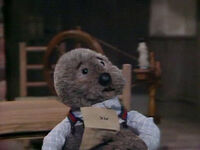 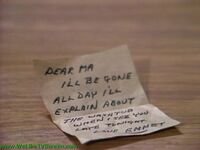 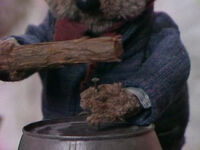 Emmet nails a hole in the washtub. 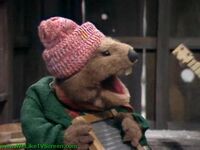 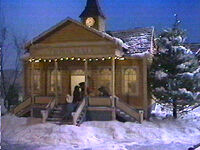 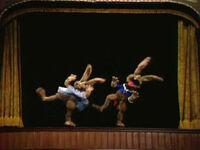 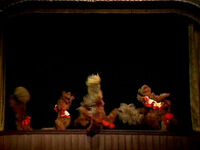 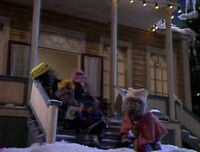 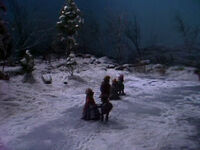 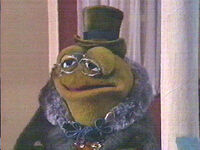 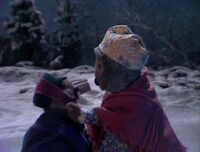 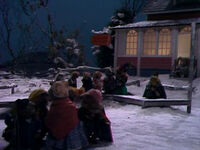 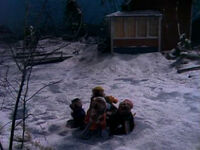 Retrieved from "https://christmas-specials.fandom.com/wiki/Emmet_Otter%27s_Jug-Band_Christmas?oldid=161563"
Community content is available under CC-BY-SA unless otherwise noted.